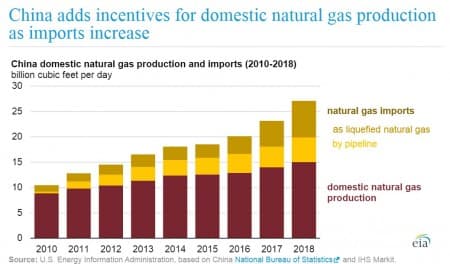 – China’s consumption of natural gas is rising faster than its production, with the gap met by rising volumes of imports. In 2018, imports accounted for 45 percent of China’s gas supply, up from 10 percent in 2010, according to the EIA.

– China has tried to scale up shale gas production, with mixed success. Gas output is on the rise, reaching 15 billion cubic feet per day (bcf/d) in 2018, but demand (and thus, imports), are growing faster.

– China accounts for the largest source of LNG demand growth going forward, so new LNG export terminals around the world are constructed with an eye on China. But if China succeeds in ramping up domestic supply, that would cut into LNG import demand in the years ahead. 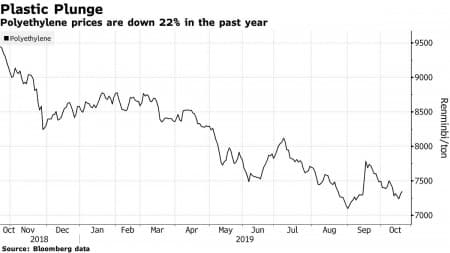 – Petrochemicals have been lauded as the next source of growth for the oil industry. Soaring plastic consumption is an environmental disaster, but oil companies, particularly the majors, see plastics as a growth sector and a hedge against peak oil demand for transportation.

– In the short run, the market for polyethylene, a building block of plastic, has fallen sharply. Prices are down 22 percent in the past year.

– The U.S.-China trade war has put a dent in demand, and the building spree for massive petrochemical complexes around the world – with $40 billion in the works for the U.S. Gulf Coast – has also raised fears of a glut for polyethylene.

READ ALSO  Blackrock, Bezos And Musk Charging Ahead in this $30 Trillion Mega-Trend

– The bank said that ExxonMobil (NYSE: XOM) will be the most affected by the downturn. 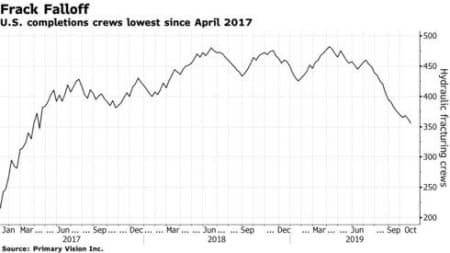 – The slowdown in drilling is helping some shale drillers beat consensus earnings estimates for the third quarter, but the cutbacks mean serious pain for oilfield services companies that live and die by activity.

– Bloomberg reports that some companies are stripping their equipment for scrap parts, rather than merely idling it in the hopes of a rebound.

– “We don’t learn from our mistakes in this industry, do we?” Joseph Triepke, founder of Infill Thinking LLC and a former analyst at Citadel LLC’s Surveyor Capital, told Bloomberg. “The U.S. oilfield-service sector has overshot the growth cycle again resulting in a capacity glut. There’s too much of everything, from horsepower to sand.”

– About 10 percent of the industry’s capacity of pumping trucks, which are needed for fracking, are expected to be scrapped entirely.

– The number of completion crews is at its lowest level in two and a half years.

– Bank of America says that only 13 million horsepower will be in use in the fourth quarter, out of a total available 25 million horsepower. In other words, about half of the U.S. fracking capacity is not being used. 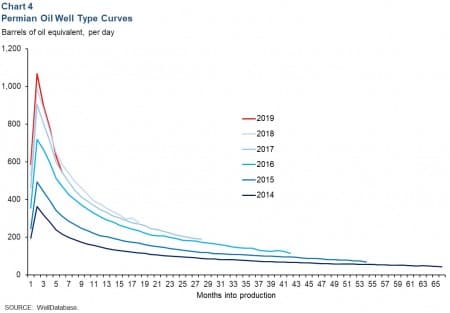 – However, the declines are becoming steeper than in previous years, offsetting some of the cumulative production gains.

– “This is likely due to a combination of the declining inventory of top-tier drilling acreage and the problem of ‘well communication’—when a well that is drilled too closely to another impairs the flow rate of both,” the Dallas Federal Reserve said.

– The result is that more drilling will be required each year in order to grow production, the Dallas Fed said. 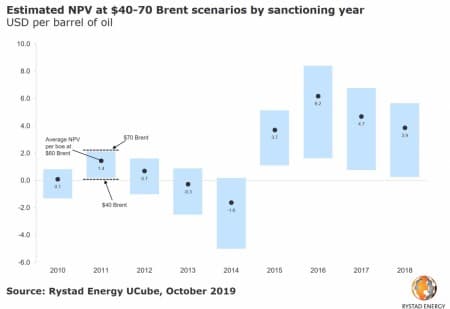 – The investment boom in offshore oil drilling during the 2010-2014 boom may not be profitable, according to a new analysis from Rystad Energy.

– But the earlier vintage of investments was predicated on much higher oil prices.

– “Projects sanctioned between 2013 and 2014 are expected to have no value creation,” Rystad said.

– The more recent wave of investments made between 2015 and 2018 look much better. 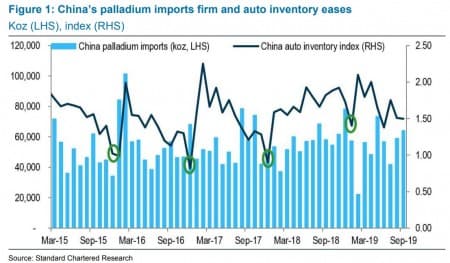 – Palladium prices have shot up by 40 percent this year, surpassing $1,800 per ounce.

– “The market has been undersupplied for seven years; we forecast another deficit this year that is likely to persist into 2020,” Standard Chartered said in a research note.

– Notably, consumption has soared because of industrial demand. In other words, speculative interest is not necessarily the main driver of the price increase, the bank said.

– Demand has also held up despite the slump of the global auto industry. “Auto-catalysts account for over 80% of palladium’s end use, and even though car sales have slowed (down y/y in China and the US in September), platinum group metals (PGM) loadings have risen in line with tighter emissions standards,” Standard Chartered said.

– “Some estimates suggest a 50% rise due to the implementation of China 6 standards, which some cities have rolled out early,” the bank added.

– The strong performance of the U.S. dollar at a time when the global economy has also slowed has proven to be a one-two punch for metals prices.

– The U.S.-China trade war is moving in a hopeful direction, but it has weighed on commodities.

– But there is an opportunity for a rebound in metals prices. Economists are hopeful that the macroenvironment is improving, and in any event, the negatives have already mostly been priced in.

– “On such fertile soil, news of any lasting agreement in the trade conflict to actually trigger a metals price rally,” Commerzbank concluded.