Back in January, I detailed how genetics testing company Invitae (NVTA) still had much to prove. Management had just detailed a miss of 2019 revenue estimates, while large losses were leading to significant cash burn and tremendous ongoing dilution. A few months later, the stock has come down quite significantly, which unfortunately resulted in a bad time for the company to raise fresh capital.

I was a bit surprised in the past few days when I saw the news of the company’s capital raise. The balance sheet was in decent shape, and even though cash burn was continuing, I thought a raise wasn’t needed just yet. But the biggest surprise, however, may have been the pricing of the deal, just $9.00 per share. It was a massive offering, almost 17.8 million shares, but it came at a significant discount to the previous day’s close, $11.71.

Many growth stocks have been hit as global markets have dropped due to the coronavirus, and Invitae certainly hasn’t been spared. This was a stock that was in the high $20s in the middle of February, but shares dropped from there. Shares bottomed in mid-March at $7.41, and have been back in the double digits for the past couple of weeks. As the chart below shows, management certainly raised funds in a position of weakness rather than from one of strength. 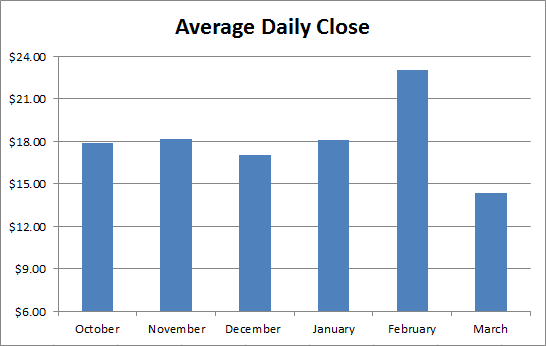 In the company’s deal prospectus, management actually detailed some decent revenue numbers for Q1 2020. A top line number above $63 million is a few million ahead of street estimates. Unfortunately, yearly guidance has been pulled like many names out there, as the situation is just very uncertain right now. Non-GAAP cash burn was estimated to be $68 million for Q1, before the acquisition, up a bit from the adjusted $50 million Q4 figure. Management also detailed two decent sized acquisitions in the above prospectus, with some of the details below.

On March 10, 2020, we acquired Orbicule BV which operates under the name “Diploid.” Diploid develops an artificial intelligence software capable of diagnosing genetic disorders based on next-generation sequencing data and patient information. The consideration paid for Diploid consisted of 2,800,623 shares of our common stock, with a portion of such stock consideration subject to a hold-back to satisfy any indemnification obligations, and approximately $32.0 million in cash.

On April 1, 2020, we acquired YouScript Incorporated as well as Genetic Solutions, LLC which operates under the name “Genelex.” YouScript has a clinical decision support and analytics platform and Genelex is a pharmacogenetic testing company. The YouScript and Genelex transactions add pharmacogenetic testing and integrated clinical decision support to the services we are able to offer. The consideration for YouScript consisted of 2,293,452 shares of our common stock and $25.0 million in cash, with a portion of such cash and stock consideration subject to a hold-back to satisfy any indemnification obligations.

The acquisitions above make the capital raise a little more logical, but I still think the company could have waited for a better offering market. With a 6% underwriting discount, Invitae is only netting $8.54 a share, and the total offering will equal more than 20 million shares. Thanks to this massive dilution, the share count has surged past 115 million as seen below, and it will go even since the underwriters exercised their option for more shares. 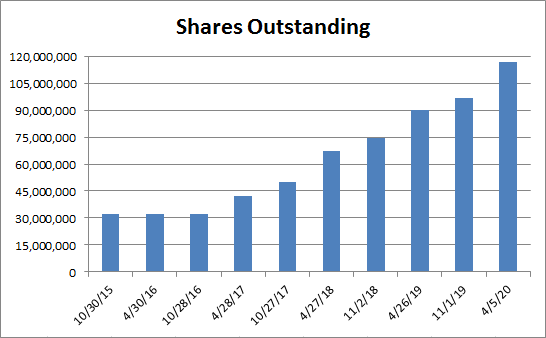 In the end, Invitae recently detailed a couple of acquisitions, but the biggest news in the past week was a major capital raise. Unfortunately, this massive offering came at a bargain bin price, meaning dilution was twice what it could have been just a few months ago. While Q1 revenues look decent, the company is still losing a lot of money and cash burn remains high. It will take a lot of work to get shares to the average street price target of nearly $26 in the short term, especially considering how much dilution investors have to digest now.