Traders are ratcheting up bets on a particularly turbulent US presidential election on November 3, and a potentially messy aftermath.

Futures contracts on the Vix volatility index — which uses options to derive an estimate of the future choppiness of the S&P 500 stocks benchmark — show what some traders call a “kink” around October and November, in a pick-up that exceeds previous contests for the White House.

The derivatives indicate that despite the US stock market’s ascent to new highs after the biggest August rally since 1986, the increasingly combative rhetoric between Democrats and Republicans and the possibility of political unrest are gnawing at investors’ nerves. Betting odds compiled by Real Clear Politics show a dramatic fall in expectations of a victory for Joe Biden, the Democratic candidate, over the past month.

“There is a noticeable bump” in expected volatility, said Federico Gilly, a fund manager at Goldman Sachs Asset Management. He estimates that options are pricing in an S&P 500 move of at least 3.5 per cent just on the day of the election. “Volatility will remain sticky on the upside until we have more visibility on the election outcome,” he predicted.

Jason Goldberg, a portfolio manager at Capstone, a big volatility-focused hedge fund, points out that the Vix index itself has been edging higher over the past month, climbing back to 26 this week, slightly above the long-term average. That has come despite strong bullish moves in US stocks — the opposite of what one would normally expect. “There does seem to be increasing anxiety,” he said.

Monthly futures contracts on the Vix index tend to slope gently upwards, as investors normally have to pay more to insure themselves against longer-term volatility. Yet the contracts maturing at the end of October and November are unusually expensive, trading at about 33 and 32 respectively.

Those premiums are considerably higher than they were at the same time in the run-up to the 2016 contest between Donald Trump and Hillary Clinton.

Four years ago, the spot Vix index was just under 14, while the October-November contracts were trading at 17 to 18 points. In the 2012 election the contracts traded at a 5 to 6 point premium, and in 2008 there was just a 3 point premium, despite the looming financial crisis.

“Despite the fact that elections, even for president, have not been a reliable catalyst for volatility in the past, a wide range of asset classes are already pricing historically high ‘event risk’ into options markets,” Joshua Younger, a JPMorgan analyst, said in a note on Tuesday.

Vix futures contracts maturing in December and in early 2021 are trading at a slightly lower price than those coming due around the presidential election, making the volatility bump priced in ahead of this contest particularly noteworthy.

However, Mr Goldberg said that the implied volatility for the end of the year was still higher than normal, indicating that traders were positioning for the risk of turmoil after the poll.

“What is interesting isn’t the election peak but the fact that it doesn’t come down quickly after the election,” he said. “The market is saying that we might not get a clean election.”

Analysts at Bank of America argue that the implied volatility towards the end of the year should perhaps be even higher, given the possibility of a disputed election result. Global markets also seem unduly complacent, they said in a report last week.

“US options markets are pricing high volatility for a clean election outcome, but are underpricing the chances of election risks spilling over beyond November,” the bank’s analysts said. “Further, we believe the US election could likely have spillover risks for global equity markets too, especially in the case of a contested election or potential constitutional crisis.”

In contrast, derivatives indicate that investors expect tranquility in the US Treasury market as the election plays out. The Move index — the equivalent to the Vix for US government bonds — remains near record lows, sedated by the Federal Reserve’s aggressive monetary stimulus programme. 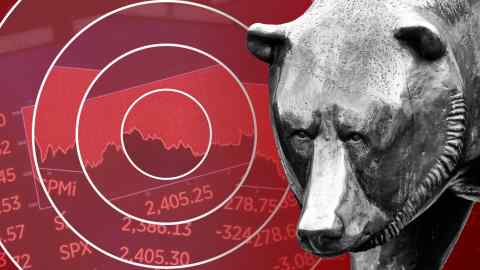 Analysts at Goldman Sachs say that bond investors may be too relaxed, given the chances of Mr Biden beating the incumbent, Mr Trump. Historical data suggests greater Treasury-market volatility when there is a change of control at the White House.

“The market . . . appears to be somewhat underpricing the risk of a switching election,” the investment bank’s analysts said in a report. “Relative to what is priced, history suggests that a Biden victory, and more specifically a Democrat sweep [of both houses of Congress], is likely to result in a longer period of elevated rates market volatility.”