Investors Are Giving Up On U.S. Shale 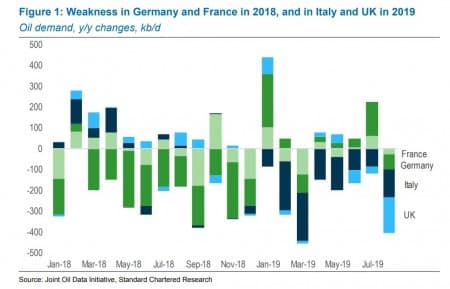 – Last year, oil demand in Germany was weak and France posted an outright contraction, but demand rose in Italy and the UK.

– This year saw the reverse, with gains in Germany and France, but declines in Italy and the UK. “Italian oil demand has fallen y/y in 10 consecutive months, with the decline exceeding 10% in five of those months,” Standard Chartered wrote in a note.

– In August, demand contracted in all four countries – that has only happened four times over the last five years. “The combined fall of 410 thousand barrels per day (kb/d) is the second-weakest reading in six years, only exceeded in March 2019,” Standard Chartered said.

– In fact, total OECD oil demand fell by 463,000 bpd in August, the fourth consecutive month of year-on-year declines. That marks the weakest stretch for demand growth in the OECD in the last five years. 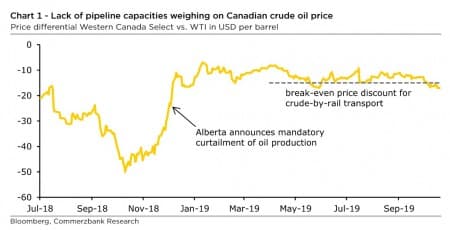 – Canadian Prime Minister Justin Trudeau survived reelection, although lost his majority. He will need to partner with a party to his left, which potentially creates new hurdles for Canada’s oil industry.

– “The lack of pipeline capacities is likely to slow the growth in Canadian oil production,” Commerzbank said in a note.

– However, if WCS narrows too close to WTI, it closes off the option of shipping crude by rail. In other words, without new pipeline capacity, WCS will have to trade at a deeper discount in order to allow for the egress of more oil.

– Prime Minister Trudeau reiterated his support for the Trans Mountain Expansion in the days after the election. 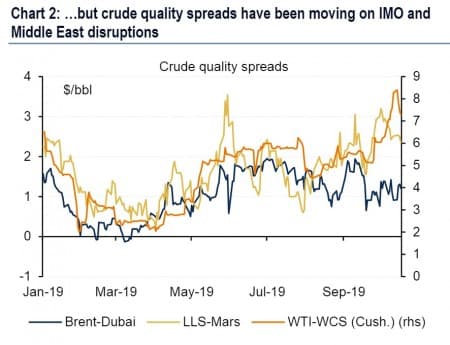 – Oil prices have been range bound, but light streams of crude are trading at higher prices relative to heavy oils.

– The forthcoming IMO regulations on sulfur content are lending a premium to lighter and sweeter oil. 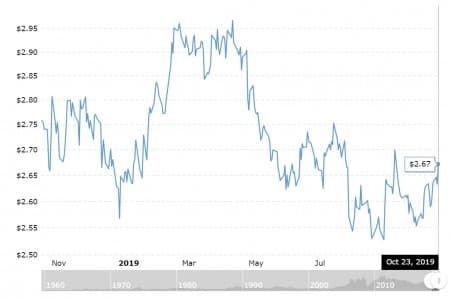 – Chile has been rocked by the most serious bout of political instability since the fall of the dictatorship decades ago. Thousands of protestors are denouncing the government over massive inequality and painful austerity measures.

– Chile is the largest producer of copper in the world. Unions at copper mines called for a temporary worker stoppage in solidarity with the protests.

– Copper prices in New York rose to one-month highs and are up about 4 percent since the start of October.

– “Major streets and highways around Santiago have been shut down with any significant port disruptions offering up near term support to copper prices,” said Colin Hamilton, an analyst at BMO Capital Markets, according to Bloomberg. 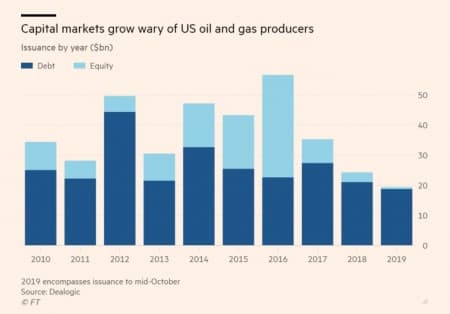 – Investors have lost faith in struggling U.S. shale drillers, and capital markets have essentially closed off.

– Investors say there are “five to 10 too many” companies in the sector, according to the FT.

– More than 200 energy companies in North America have gone bankrupt since 2015, and that figure is on the rise this year after slowing down in 2018.

– Production may continue to grow, but it will increasingly come from the oil majors and other large companies who can self-finance. 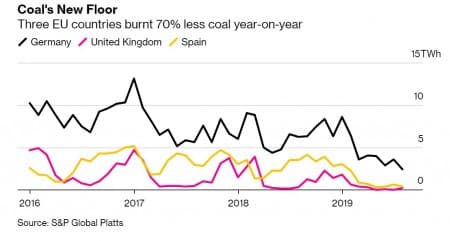 – European coal power generators could post as much as $7.3 billion in losses this year, due to falling costs for renewable energy and a steep drop in natural gas prices. At the same time, the price for carbon credits on the European cap-and-trade system have climbed, which hits coal economics worse than other fuels.

– Nearly 80 percent of lignite and hard coal-fired generation is unprofitable this year, according to Carbon Tracker.

– Germany, the UK and Spain have consumed 70 percent less coal this year compared to last, a staggering decline.

– “EU coal generators are hemorrhaging cash because they cannot compete with cheap renewables and gas and this will only get worse,” said Matt Gray, Carbon Tracker’s head of power and utilities. “Getting off coal is cheap and can be a win-win for consumers and shareholders, providing governments and investors work with local communities.”

7. Global car industry may have peaked 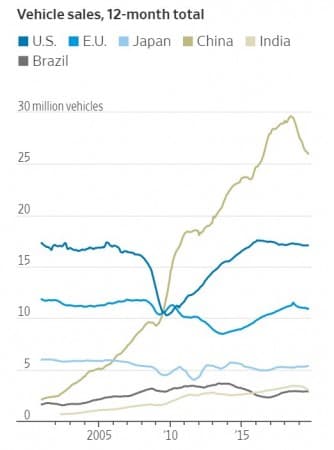 – Global car sales declined in 2018 and are on track to decline even further this year and again in 2020.

– Part of the problem is an economic slowdown, but analysts are starting to believe that the auto industry is past its peak. In the U.S., for instance, car sales peaked in 2016, and in 2000 in the EU, and in 1990 in Japan, according to the Wall Street Journal.

– The woes in the auto sector are a result of the economic slowdown, but they are also contributing to the slowdown since auto manufacturing accounts for 5.7 percent of global GDP and 8 percent of global trade.

– At the same time, EVs are making small but growing headway into this market. The warning signs for oil demand are clear to see.