Sometimes, when the investment narrative becomes boring, the attention focuses on foreign markets, China, and the emerging markets. It often sounds like the only investment solution when the domestic markets become unattractive or too volatile. But we need to be careful. Investing in foreign markets involves the knowledge of the local economies, local accounting laws, and local currency strength or weakness. These are just a few of the variables.

We can find some answers by starting to look at the patterns of the global business cycles. The OECD (Organization for Economic Co-operation and Development in Paris, France) provides data the average investor can use to recognize opportunities or risk. 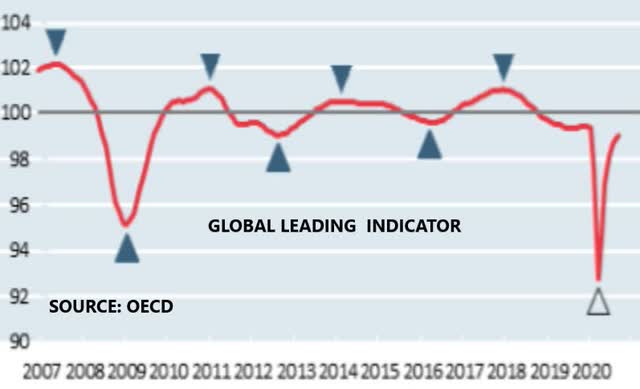 The above chart shows the global business cycle. It is an important chart when it is compared to the business cycle of other developed countries.

The OECD defines the graph as a leading indicator of the economy. A practical way to look at the graph is to think that it stands for the fluctuations of the economy around an average growth rate (the horizontal line going through 100.)

The position of the graph is well below the 100 level. The message is the global economy is improving but growth remains lukewarm and below its long-term average. 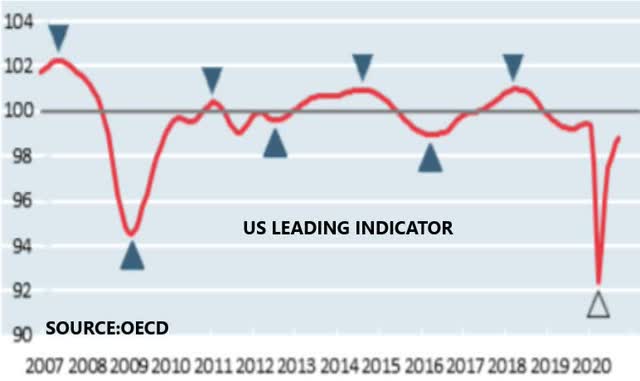 The above graph shows the OECD indicator of the US business cycle. The important feature is that it resembles the graph of the global business cycle – probably because the US economy is so dominant within the global economy. 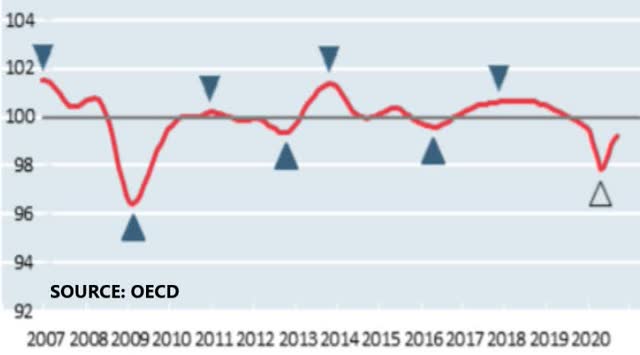 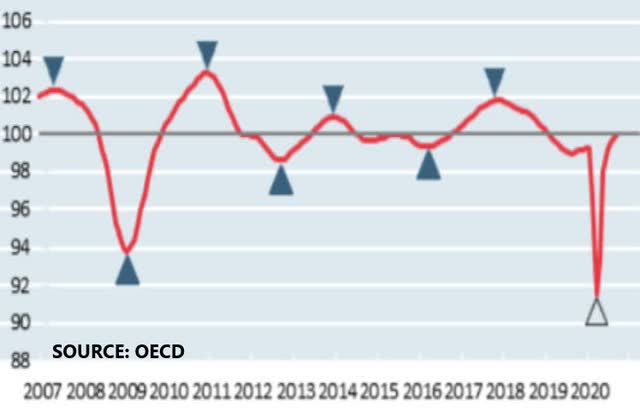 The above graph shows the business cycles of the German economy. The turning points are exactly like those of the global economy, US and Japan economies. The German economy, however, seems to be stronger. The indicator is in fact much closer to the horizontal line than the indicators of the other economies. 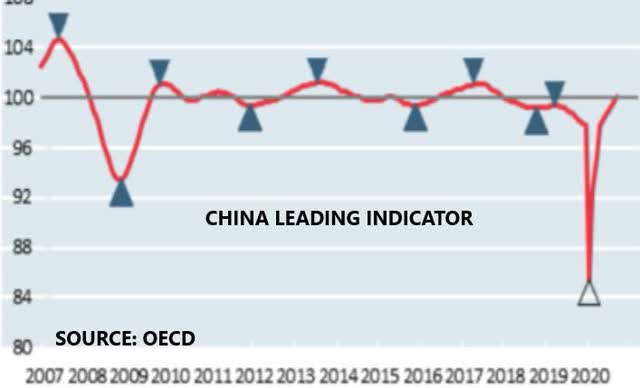 Finally, China’s business cycle shows the same turning points as those of the previous graphs. The main difference is the graph shows the Chinese economy has reached a growth rate consistent with its long-term pace.

The reason for showing these graphs is to point out that business cycles among the developed economies have the same turning points. The main reason is the global economies are closely interconnected and a slowdown in one of them is immediately transmitted to the other developed economies.

This is an important conclusion because it helps to accept why the equity markets of the developed economies are also closely connected. Investors, therefore, should not be surprised to see the major turning points in the global equity markets taking place at the same time as shown in the following chart.

The main reason is they reflect the synchronized relationship among the business cycles of the global economies.

READ ALSO  America is back and ready to lead world, says Joe Biden

The above chart shows the challenging task of predicting which market will rise faster than the US market between two major tops. This decision involves a view on the growth differential between the US and a particular foreign economy. Not an easy task for the average investor. Furthermore, the investment choice of a foreign market is not necessarily a hedge against a US bear market because the global markets move all in the same direction most of the times.

Disclosure: I am/we are long SPY. I wrote this article myself, and it expresses my own opinions. I am not receiving compensation for it. I have no business relationship with any company whose stock is mentioned in this article.