Invest In Esports Not For “Stay At Home” But For The Long Term (NASDAQ:ESPO)

With COVID-19 spreading across the planet, only abating somewhat in certain regions in recent weeks, investors were left looking for areas in the market which would prove resilient to such a shock. Video gaming saw a big surge in usage during the pandemic as people stayed/worked at home. Not surprisingly, many gaming companies reported robust user metrics and revenue figures for 1Q20. However, many of them were cautious regarding their outlook as the long-term damage to the economy, if any, remains unknown.

Now, if we look at the long term, emerging markets will be a key driver in esports revenue growth as these regions are under-served. Developed markets might have reached peak spend per user but next generation consoles will continue to push up spending albeit gradually.

According to Newzoo, the global esports market will produce revenues of US$1,059.3M in 2020 before rising to an estimated US$1,598.2M in 2023F. They lowered current year forecasts by 3.7% primarily due to COVID-19’s impact on offline events which were delayed or cancelled. Merchandise and tickets are expected to bear the brunt of the downward revision with ~12.5% reduction, followed by media rights and sponsorship revenue which were both lowered by about 5%.

Streaming revenue in the spotlight

Owing to the quarantine period, live streaming of video games and competition were in fact in demand, according to the checks done by Newzoo. Viewership has increased, drawing more attention to teams. Because of this, COVID-19 has essentially supplied “free” marketing for competitive teams.

As new titles are published, organizers are receiving higher publisher fees to host their tournaments. This steers away from the concern that in mature markets competition was fierce among organizers which would have forced them to cut prices.

Newzoo revised upwards their 2023F tail-end revenue forecasts. I agree with their assessment mainly because I believe there’s a long and rich runway for game developers to release new titles and genres, alongside console upgrades. Video gaming penetration, especially the esports market, is still relatively low globally. Viewership is an important driver for revenue growth, particularly to talent retention, which fuels the competitive scene. 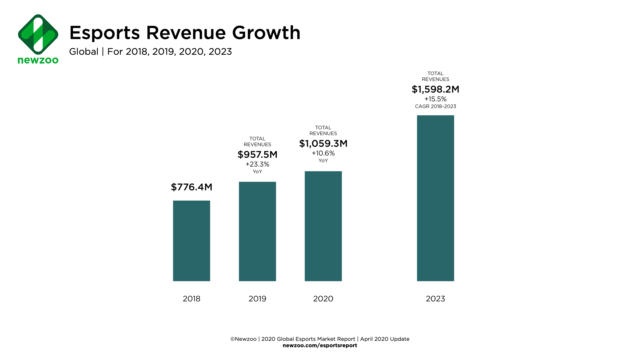 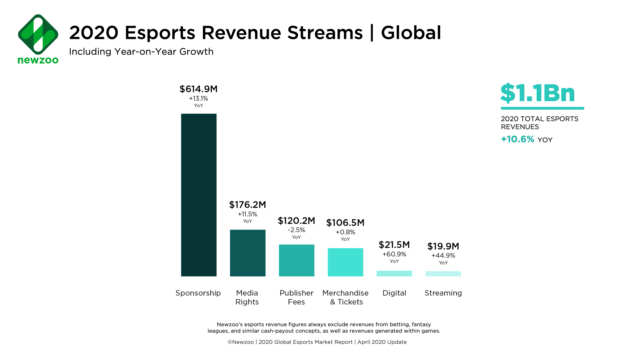 As I mentioned in my recent Tencent (OTCPK:TCEHY) article, the company experienced a stellar quarter, with user metrics and revenue surging, and they are also seeing an increased return on their investment in their game IPs due to COVID-19 which has enlarged their audience. This stickiness is likely to be around for much longer than the impact of COVID-19 itself even though as people return to work/school, play times will gradually normalize. The reason is because game developers are able to deliver incremental value to their players which increases both time spent and consumption in their game IPs. 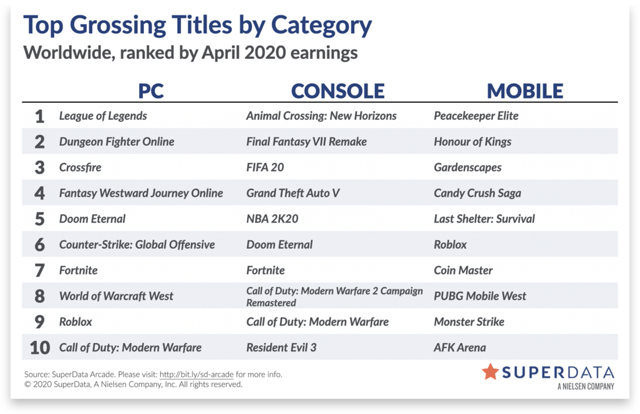 Investing in esports and video gaming with ETFs

ETFs are a great way to gain exposure to an industry as they are publicly traded, quite liquid and cover a basket of securities tied to an underlying index.

Large holdings gear towards big names and include semis

Most notably, this ETF contains semiconductors, like Nvidia (NVDA) and AMD (AMD), since a meaningful portion of their businesses are GPUs which are essential for almost all gaming hardware found in consoles, PCs, laptops and tablets. However, these semis also have revenue from other sources that include servers, datacenters and CPUs. Moreover, the semiconductor industry is quite cyclical and may not align with the video gaming industry.

A large cap stock like Tencent also derives a significant portion of its revenue from online games but it also makes money in online ads, cloud, fintech etc. This also means that it is not a pure-play. Similarly, NetEase (NTES) and Sea (SE) build their businesses on games, ecommerce and other internet applications.

To reduce the single-game risk, many game publishers have many games in their pipelines, addressing different genres and audiences. This mitigates the risk of a single hit becoming obsolete. To include many publishers in the ETF, like Nintendo (OTCPK:NTDOY), Activision Blizzard (ATVI), Electronic Arts (EA) etc., it further diversifies the games portfolio. 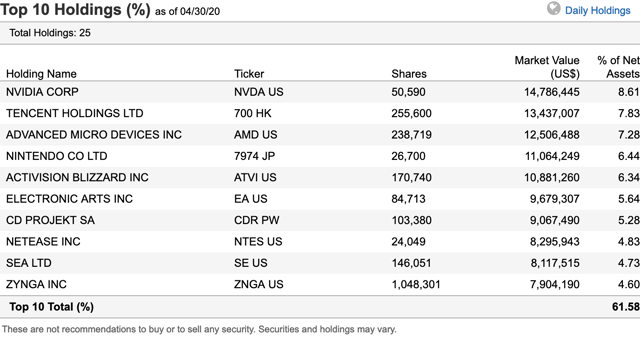 The Roundhill BITKRAFT Esports & Digital Entertainment ETF is designed to provide investors exposure to esports and digital entertainment by tracking closely (before fees and expenses) to the performance of the Roundhill BITKRAFT Esports Index (“NERD Index”). This index comprises a modified equal-weighted portfolio of globally-listed companies who are actively involved in the competitive video gaming industry.

The top ten holdings do not include large companies like Tencent and semis which is one of the main differences with the ESPO ETF.

Also, streaming names like AfreecaTV, Huya (HUYA) and Bilibili (BILI) are included. Media and game developer company, Modern Times Group (‘MTG’) is also an interesting addition. Through these companies, the ETF has a larger exposure to the media rights revenue stream through its operations in organizing esports competition events. 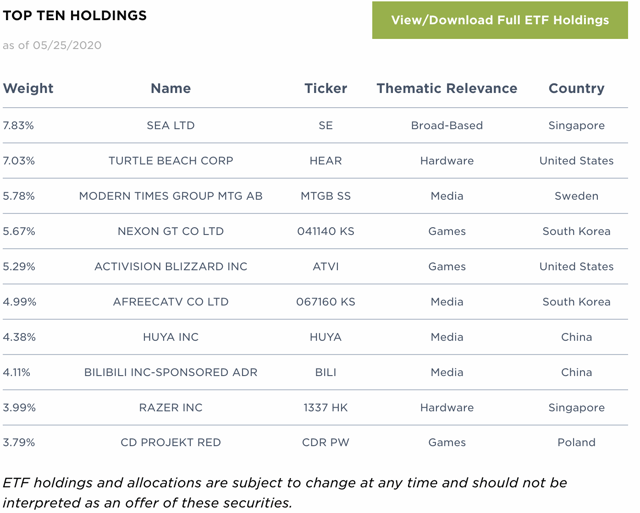 Here is a summary of a few key statistics. ESPO is clearly the more mature ETF with a much larger fund assets (thus higher liquidity) and has also attracted more funds inflow this year. Return-wise, ESPO outperformed NERD mainly due to the stellar outperformance of large caps like Tencent.

Measured on a forward EV/EBITDA basis, NERD’s holdings are slightly cheaper than ESPO while expense ratio is 30bps lower than ESPO’s 0.55%.

My verdict is that both ETFs are comparable if one chooses to invest in the industry. The preference lies within whether one has a tilt towards smaller companies which are closer to being pure-plays in esports. NERD would be a better choice in this scenario as one can avoid investing in semis and larger caps which have diversified revenue streams other than video gaming.

Without a doubt, COVID-19 has impacted economies around the world, forcing countries into recession, while video gaming industry has somewhat mitigated the crisis due to its online nature. However, the health of the broad economy is still essential to lifting and sustaining discretionary spending in games and entertainment while being crucial for offline esports events. That said, global cases are gradually slowing, according to the graph below. 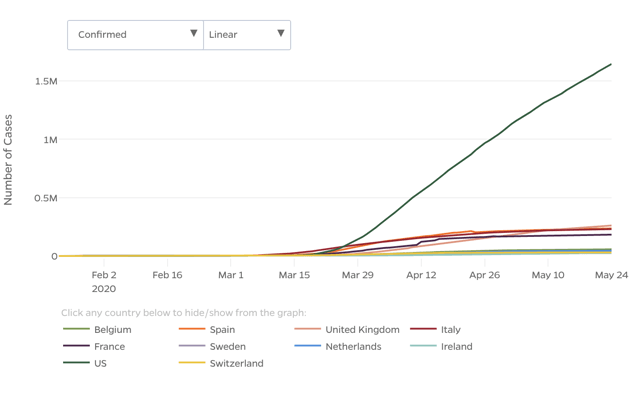 Additional disclosure: Disclaimer: All research, figures, and interpretation are provided on a best effort basis only and may be subject to error. Any view, opinion, or analysis does not constitute as investment or trading advice, please do your own due diligence.

Previous PostSE: keiser and BITCOIN !Next PostJAB seeks valuation of up to €16bn for coffee business