Intuit: Too Expensive For Too Little Growth (NASDAQ:INTU)

Intuit (INTU), the consumer-oriented financial software company behind popular programs like Quickbooks and TurboTax, has seen strong performance this year as the global pandemic impacted its business by far less than originally feared. The company has also brazenly moved ahead with its $7.1 billion purchase of Credit Karma. In defending the large purchase, Intuit has argued that the company is betting big on being able to help consumers “unlock smart money decisions” through its fuller product set, and that Credit Karma helps Intuit nearly double its consumer TAM from $29 billion to $57 billion.

So far, the market has responded well to Intuit’s strategy. Year to date, the stock has rallied ~13% – paling in comparison to some faster-growing software stocks, but certainly beating the S&P 500’s 3% gains over the same timeframe by a wide mile.

Yet over the past month, shares of Intuit have pulled back sharply from their all-time highs for one reason alone: investors are sounding off alarm bells on valuation again. News headlines of a 2000s-style tech bubble have become rampant over the past few weeks, and Intuit is a great example of a company whose recent stock price outperformance is due primarily to multiples expansion rather than fundamental growth.

Even after the recent pullback, Intuit’s current share price of ~$300 is priced at a 35.5x forward P/E multiple based on expected FY21 (the fiscal year that Intuit just began this August) pro forma EPS of $8.45 (data from Yahoo Finance), which would represent only meager 7.5% y/y growth versus FY20 actualized EPS of $7.86. That’s a premium multiple for subpar growth. Intuit’s PEG ratio, dividing P/E by a 7.5 growth denominator, winds up at a meaty 4.7x (a <1x PEG ratio is considered a value stock).

To me, there are three key near-term risks that may cause Intuit shares to slide from its current premium multiples.

While the first item is a pure and circumstantial toss-up, we can review the latter two items in greater detail. In my view, investors should lock in gains on this stock and invest elsewhere.

Competition in both small business and consumer

Let’s start with the competitive piece first. In my view, Intuit would be able to justify its premium P/E multiple if it was the only game in town, but this is far from the case. (even though Adobe (ADBE) is also trading at elevated earnings multiples, I find that justified by the company’s superior growth profile and the fact that virtually no other company can match Adobe’s creative suite).

Let’s start with the consumer side first, which I think is the less competitive of Intuit’s two segments. The most obvious competitor to Intuit’s TurboTax product is H&R Block (HRB). A comprehensive review of the two platforms on NerdWallet notes that:

H&R Block is generally the less expensive of the two. TurboTax’s top-tier, throw-it-all-at-us version costs well over $100 at list price when you add in a state return (and over $200 if you go with its software-slash-human hybrid package called TurboTax Live). H&R Block’s corresponding top-tier product is cheaper when you add the human review to make it an apples-to-apples comparison at the high end.”

While the most basic tax returns (standard deduction only, no itemization) are free on both TurboTax and H&R Block, the first paid tier for H&R Block starts at $50 versus $60 for TurboTax. Similarly, the more comprehensive package for self-employed workers costs $105 on H&R Block, versus $120 for TurboTax.

TurboTax’s stronger brand recognition may let it get away with charging a slight premium, but there’s likely very little loyalty among consumers between these two platforms, and switching providers year-over-year has low barriers.

The biggest competitive risk on the consumer side, however, is if the IRS finally decides to modernize and make online tax filings easier for consumers. The Trump administration has already taken small steps in this direction by simplifying federal tax forms, but in the future a TurboTax-like interface could be added directly on the IRS site. This would put pressure on Intuit’s entire consumer arm, which generates roughly 40% of annual revenue.

Competitive pressures are even fiercer on the small business front. Similar to TurboTax, Quickbooks has built up a venerable brand reputation for quality and for being the gold standard among bookkeepers, but it’s not exactly known for being the budget option. Quickbooks’ basic “Simple Start” package, which only allows for one user and doesn’t include key features like bill payments or inventory tracking, costs $12.50/month, while the more comprehensive “Plus” plan starts at $35/month. Payroll options, meanwhile, will run an additional $22.50/month at the most basic level plus $4/month for each employee. 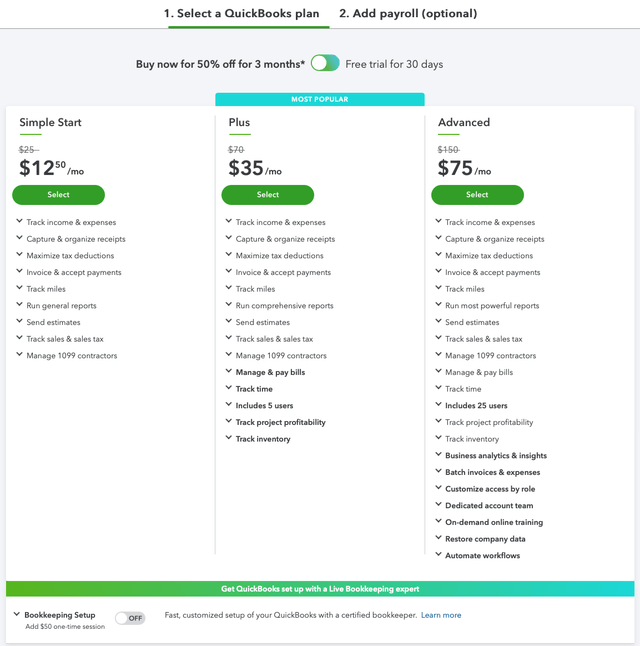 Plenty of Intuit’s competitors, meanwhile, try to attack Quickbooks from the price angle. Wave Accounting might be the best example of this: Wave’s basic accounting features including invoice creation are completely free, though it makes money on payroll options which is slightly more expensive than Quickbooks’: 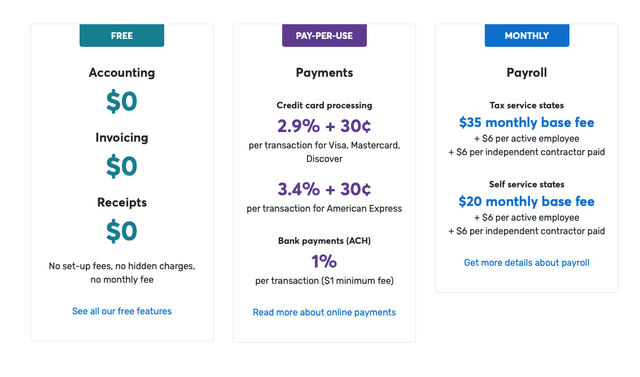 Aside from Wave, the list of other Quickbooks competitors is long: Xero, Freshbooks, and Quicken are some notable examples. And once companies move up from the small business sphere to the mid-market level, Oracle’s Netsuite (N) becomes a far more dominant player.

In part due to competition from lower-priced alternatives on both the consumer and small business front, and in part due to sheer saturation from the fact that Intuit’s products are already so well-adopted, Intuit’s growth over the past few years has been rather subpar, at least in tech sector terms.

Take a look at Intuit’s performance through its most recently-released fiscal Q4:

Disregard the 83% y/y growth rate in Intuit’s fourth-quarter revenue: the company benefited from the extension of federal tax filings to July, which pushed a swath of consumer revenues from Q3 to Q4. When we look at Intuit’s combined second-half revenue of $4.82 billion, that grew only 13% y/y – consistent with FY20’s full-year growth rate of 13% y/y.

Now, there is some good news embedded here. The bear case for Intuit posited that the company may perhaps see a large decline in small business revenue due to the widespread closure of many mom & pop businesses like restaurants that form a not-insignificant portion of Intuit’s small business customer base. Thus far, after slowing to 11% y/y growth in Q3, the small business arm re-accelerated to 16% y/y revenue growth in Q4.

Sasan Goodarzi, Intuit’s CEO since 2019, noted on the most recent Q4 earnings call that trends in the small business space have markedly improved since the onset of the coronavirus:

We are seeing the resiliency of our platform following a different demand earlier this year when shelter-in-place shutdown many Small Businesses. We are now seeing recovering trends across our platforms, including improved retention rates, payment volumes and employees paid with our payroll offerings, as customers continue to rely on QuickBooks as the source of truth for their business. With that said, there remains a great deal of uncertainty in the market, particularly for Small Businesses as the pandemic continues to run its course.”

The company additionally noted that QuickBooks Online (the cloud-based version of Quickbooks, and the company’s primary focus) saw ten points of customer growth acceleration since Q3, but that new customer growth is still below pre-pandemic levels. Quickbooks’ retention rate has also slipped two points to 77%, reflecting churn from failed businesses.

Still, while Intuit’s most recent results are certainly far better than feared, we find the ~13% y/y revenue growth rates and single-digit EPS growth expected for FY21 to be unimpressive relative to Intuit’s rich valuation multiple.

Intuit’s current downtrend is a reflection of a business whose share price has advanced past what its fundamentals justify. Intuit isn’t growing materially faster on either a revenue or earnings standpoint than the average company in the S&P 500, yet its >35x forward P/E ratio seems not to take into account either its lackluster growth or its wide pool of competitors. Don’t be tempted to buy the dip here.

For a live pulse of how tech stock valuations are moving, as well as exclusive in-depth ideas and direct access to Gary Alexander, consider subscribing to the Daily Tech Download. For as low as $17/month, you’ll get valuation comps updated daily and access to top focus list calls. This newly launched service is offering 30% off for the first 100 subscribers.

Previous PostSE: China has ramped up purchases of U.S. soybeans recentlyNext PostFederal Reserve Board issues Advance Notice of Proposed Rulemaking on an approach to modernize regulations that implement the Community Reinvestment Act