Intuit Hitting The Upper Rail Of An Upwardly Sloped Trend Channel Ahead Of Earnings (NASDAQ:INTU)

Home Financial news Intuit Hitting The Upper Rail Of An Upwardly Sloped Trend Channel Ahead Of Earnings (NASDAQ:INTU)
2020-11-142020-11-14By finanz.dk

Financial software firm Intuit (INTU) has seen its stock price triple in the last three and a half years. Solid earnings and revenue growth appear to be partially responsible for the rally and now the company is getting ready to release fiscal first quarter 2021 earnings results on November 19.

Intuit’s earnings and revenue growth are good, but not great, but its management efficiency measurements are great. The return on equity is 46.9% and the profit margin is 35.1%.

The current valuations are higher than the average stock with the trailing P/E at 50.5 and the forward P/E at 41.5. These readings aren’t terrible for a growth oriented stock, but they might be high enough to scare value investors away.

Up Against the Upper Rail of a Trend Channel

One of the things that jumped out at me with regard to Intuit’s chart is the trend channel that has formed over the last two and a half years. We see the upper rail is very clearly defined with the highs from 2019 and 2020 connecting very nicely. The lower rail isn’t as clean thanks to the huge drop back in March, but there are a number of stocks with similar patterns. I have called the action in February and March a black swan event as investors panicked and sold almost everything during those few weeks. 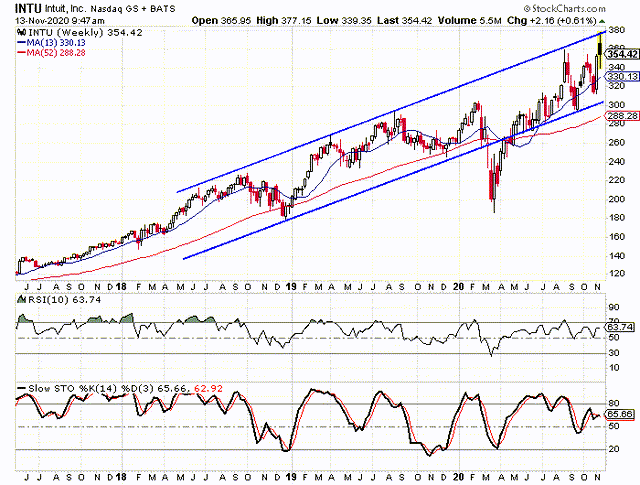 I must say that I am a little concerned that the stock is so close to the upper rail and actually hit it on November 9. While the 10-week RSI and the weekly stochastic indicators aren’t in overbought territory, I can see the stock slipping a little or maybe moving sideways for a few months — just enough to move the stock away from the upper rail.

If the earnings report does trigger a small pullback, I would watch the lower rail as a potential entry point on Intuit. The lower rail is currently right around the $305 level, but it’s climbing and will be up to $310 in the next week or so. If we use the $310 level as a potential target entry point, that would mean a decline of about 12.5% from where it’s trading currently. A move of that nature would also bring the oscillators down and they would likely be below the 50 level.

Sentiment Indicators are Neutral on Intuit

The sentiment indicators show a pretty neutral stance toward Intuit. Analysts are a little less optimistic toward the stock than they are the average stock. There are 20 analysts following it with 12 “buy” ratings, six “hold” ratings, and two “sell” ratings. That gives us a buy percentage of 60% which is slightly below the average range of 65%-75%. 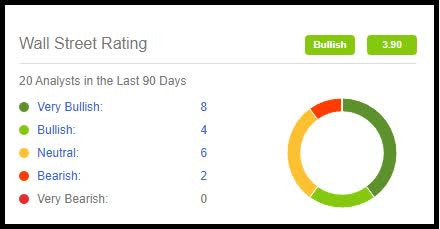 The short interest ratio is at 2.53 and that is slightly lower than the average ratio which is around 3.0. The ratio is lower than it was back on August 25 when Intuit last reported earnings. The number of shares sold short has dropped from 2.4 million shares in August to 1.99 million shares currently. The average daily trading volume dropped rather sharply in October, falling from 1.4 million shares to 787K. 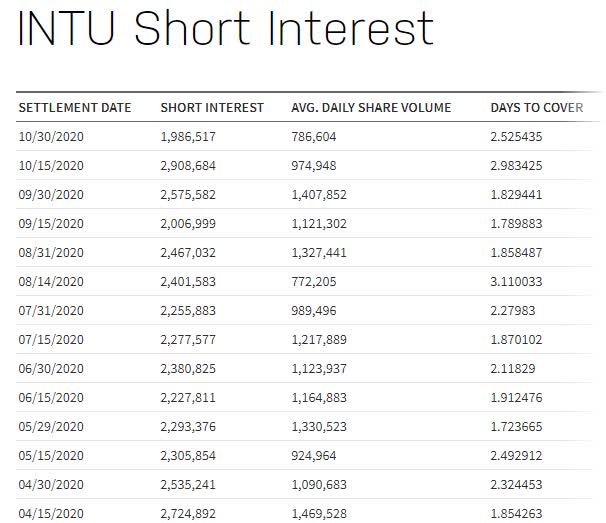 The put/call ratio is at 1.10 currently and that falls in the average range with 15,613 puts open and 14,247 calls open at this time. The average ratio falls right around 1.0, so Intuit’s is just a little higher than average. The ratio was higher back in August when it recorded a reading of 1.28 ahead of the Q4 earnings report.

My Overall Take on Intuit

Breaking down each of the analysis styles, I like Intuit’s fundamentals, I’m a little concerned about the stock being so close to the upper rail of the trend channel, and the sentiment is pretty uneventful. I like the stock on a long-term basis because of the fundamentals, but I think we could see a pullback in the stock over the next few weeks.

The earnings and revenue growth are good, but the ROE and the profit margin are well above average and that makes up for the modest growth. The valuations are a little high right now, but a small dip in the stock price would help those come down a little.

Intuit has beaten its earnings forecast in seven of the last eight quarters, with the only miss being in February. The company blew away estimates in August and the stock gapped higher as a result. Unfortunately, August 26 marked a temporary peak in the stock and dropped back from the $360 high back down to $300 a few weeks later. I think we could see a similar move this time around. If we get that kind of move, I would suggest watching the lower rail as a possible entry point.

If you would like to learn more about protecting and growing your portfolio in all market environments, please consider joining The Hedged Alpha Strategy.

One or two option recommendations per month

A weekly update with my views on the market, events to keep an eye on, and updates on active recommendations