Intel has agreed to sell part of its memory business to South Korean chipmaker SK Hynix for $9bn, in the latest upheaval in the global computer chip industry.

Seoul-headquartered SK Hynix will acquire Intel’s Nand memory and storage business over the next five years, it said in a statement to the stock exchange on Tuesday. The purchase includes associated component and wafer units as well as the US group’s fabrication facility in Dalian, China.

“This transaction will allow us to further prioritise our investments in differentiated technology where we can play a bigger role in the success of our customers and deliver attractive returns to our stockholders,” said Bob Swan, Intel chief executive, in the SK Hynix statement. Intel did not comment further.

Intel will retain its proprietary memory chip technology, Optane, a key part of its plans to consolidate its leading position in the infrastructure underpinning data centres.

The deal, which requires regulatory approvals, comes amid a series of adjustments by Intel as it shifts out of non-core activities. For the US chipmaker, a sale of the Nand business — chips that provide long-term data storage — marks an exit from a business that has increasingly been viewed as non-strategic.

Intel said it would invest the transaction proceeds in areas such as 5G networking and artificial intelligence.

The sale of the Nand flash memory operation is Mr Swan’s latest step to refocus on fewer markets, following the sale of Intel’s smartphone modem business to Apple last year. In July Intel said it was considering contracting out more of its chip manufacturing after it pushed back the launch of its next generation of processor chips by six months. 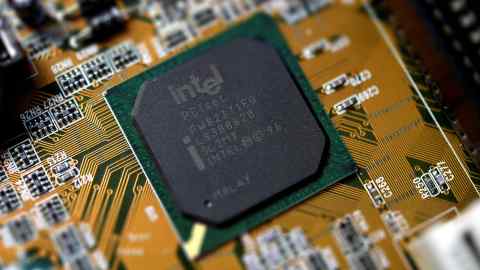 Pressures in the Nand market hurt Intel’s company-wide profit margins in 2019, but a recovery in pricing this year has contributed to a rebound.

In Dram — chips that enable devices to perform multiple tasks — SK Hynix ranks second only to Samsung in market share, ahead of US group Micron and Taiwan’s Nanya Technology.

The addition of Intel’s business will make SK Hynix the second-biggest producer of Nand chips, ahead of Japan’s Kioxia and Micron.

The deal adds to a blockbuster year for semiconductor M&A with transaction value in 2020 on pace to be the second highest on record, behind 2015. That is on the back of Nvidia’s $40bn purchase of chip design group Arm from Japan’s SoftBank and Analog Devices’ acquisition of Maxim Integrated products for more than $20bn.

The $9bn acquisition, which was first reported by the Wall Street Journal, is one of the biggest tech transactions in South Korean history, rivalling Samsung Electronics’ $8bn acquisition of US driverless car technology group Harman International Industries.