Intel: 10 Important Questions For Q1 Earnings And Beyond (NASDAQ:INTC)

Intel (INTC) will release its first quarter result on Thursday, April 23. Coming off the back of two strong quarters to end 2019 with positive growth, Intel had already stated that it expected this momentum to continue into the start of 2020. This would be driven by continued cloud strength and the Windows 10 refresh. However, Intel expected those factors to recede into the back half of the year, while competition from AMD (AMD) would also pick up.

Three months later, and so far it seems this scenario is playing out largely as expected, with the added caveat of COVID-19. At least near-term, reports have come out suggesting upticks in PC and data center demand, confirmed by Intel. This may well continue into Q2. Intel has also launched refreshed CPUs for the data center with substantially reduced prices, confirming the competition narrative as those SKUs ramp throughout the year, and also launched its first of nine 10nm products this year.

Reports have also come out (also confirmed by Intel) of a more muted Q2 launch of Cooper Lake, which will be constrained to only 4- and 8-socket (4S/8S) servers, instead of the mainstream 2S. Ice Lake, once scheduled for mid-2019, then mid-2020, remains on track for shipments late this year.

Besides updating its guidance, Intel management might want to address several further issues during the call.

Intel and AMD recently both launched their latest high-performance laptop parts. While Intel might still have competitive performance, it seems to come at the cost of power consumption.

While product leadership does imply performance, especially for laptops it also means power consumption. Since 7nm mid-2019, it seems that AMD has taken a definitive lead there (up to 2x), while reviews also suggest that Intel’s 10nm does not improve power much above 14nm++, so AMD 7nm vs. Intel 10nm would still be in AMD’s favor. (Some leaks do suggest that Tiger Lake’s 10nm+ might be a substantial improvement.)

This is especially noteworthy as power consumption was one of Intel’s strengths when it moved to FinFETs 3-4 years ahead of the rest, at 22nm.

Furthermore, even though this is Intel’s latest 14nm refresh, Comet Lake-S (desktop) will launch in late May, compared to Comet Lake-U’s (laptop) September launch. That’s a 6- to 9-month product delay of a refreshed product on a mature 14nm process, despite Intel’s insistence on a yearly (12-month) cadence.

Intel last year also promised to move to a yearly cadence for its server products. Cascade Lake launched in April 2019. Cooper Lake will launch in Q2, but limited as discussed above. Now seems about a good time for Intel to commit (publicly) to a Q2 2021 launch for its successor, Sapphire Rapids, once scheduled for mid-2020.

In general, does Intel have a plan to regain product leadership across all metrics and all product categories, and by what product generation should this be expected? Does Intel still expect this to only happen by 7nm, as discussed at its investor meeting in 2019?

Put another way, Intel’s 10nm does not have a good reputation in the enthusiast community, given the delays. Intel’s 7nm however, as Intel described, should embody all of its learnings, while the product engineering/IP side should also have had a much better chance to adjust to and plan for the revised, predictable schedule.

In 2019, Intel’s R&D spending declined for the first time in a decade, although slightly ($0.2B) driven primarily by the modem exit.

As I discussed in a previous article, COVID-19 has caused a work and study from home paradigm, which is favorable for demand. But this could be offset by the recession, or just be short-term.

Many companies have withdrawn guidance, so it remains to be seen what information Intel can and will provide.

In January, Intel discussed that the shortage was nearing its end with the capacity that came online in the second half of the year – part of the reason of the unusually high Q1 guidance was pent-up demand.

However, with the added demand due to COVID-19, there may be some lingering issues. I would expect Intel to provide one of its last supply updates before this issue disappears with the additional 2020 investments.

One further caveat may be supply chain issues due to COVID-19. DigiTimes reported recently that Samsung would have delayed its 3nm production from 2021 to 2022.

Intel had guided to another record capital investment year, spending $17 billion on capex. Given how crucial 7nm is for catching up in process technology, Intel can’t afford to delay 7nm.

Last year, Intel went into quite some detail about the status of Ice Lake: production in Q1, achieving PRQ in the second quarter, shipments in June, and hitting shelves towards the end of Q3 with over 30 designs by December. DG1, Intel’s first discrete GPU, meant for laptops, also went through power-on tests.

Leaked roadmaps and comments from Murthy in December had suggested that Ice Lake’s successor Tiger Lake might launch in the second quarter – well before the 2020 holidays. Tiger Lake also incorporates the Xe architecture.

Any guidance on Intel’s next major 10nm product would of course be welcome, although this might be reserved for the traditional June Computex timeframe, as Lakefield. Also, more important for Intel’s GPU ambitions would be information about its high-end desktop GPU Arctic Sound.

Getting a bit more technical (probably more than Intel would go into), one issue of note with Intel’s current laptop line-up is core count. Ice Lake launched with four cores, while Comet Lake-U went up to six to compete with AMD on MT performance. It might be assumed that it was too late to adjust the plans for Ice Lake, but for Tiger Lake this likely could have been adjusted. As discussed in Q0, even after years of process/manufacturing delays, the product side isn’t up to par either. 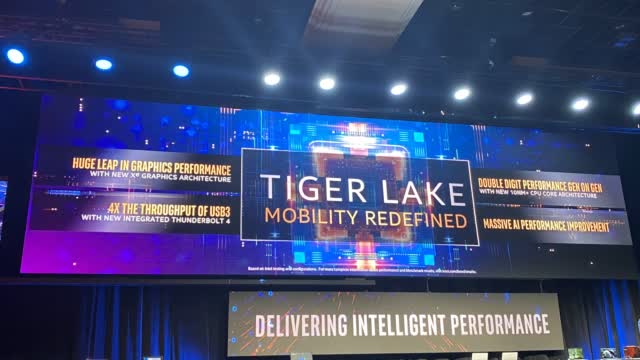 Not just 10nm, but also 14nm had quite a troubling start. However, the company was quite open about releasing comparative yield updates at its investor meetings and developer forum.

While those graphs didn’t contain absolute data, just comparisons to 22nm, any data at all has been absent about 10nm. Meanwhile, TSMC has become more open about disclosing such metrics for 7nm and 5nm, likely because they are quite good.

Intel did say that 10nm was starting to track 14nm, but also admitted its yield would never be up to par to the now-mature 14nm and 22nm nodes.

Further considering 7nm, what might be particularly of interest is at what yield Intel expects to ramp this node, compared to 10nm. Intel’s lead product, Ponte Vecchio GPU, will tape out this year. Intel is now – and should be – at about the time (for 7nm) where it announced that 10nm would launch in the following year’s holiday period, so the visibility in the 7nm era should be much clearer for Intel by now.

Not just the yield, but also the pace of yield improvement, and together with that the volume ramp. It should be expected that Intel is targeting 14nm-like yields for 7nm (at some point during its cycle).

One last point, while Intel said 7nm is on a two-year cadence, this is not quite apples-to-apples. The 10nm lead product was Ice Lake in laptops, while Ponte Vecchio is aimed at the Aurora supercomputer and will mark a new product category for Intel (a data center GP-GPU). It can therefor be expected that Intel’s real high volume products, and its 7nm laptops, won’t fulfill this 2 to 2.5 year cadence, which questions Intel’s ambition to catch up to TSMC and AMD in the most relevant product categories (CPUs). How does Intel management see this?

(A holiday ’22 7nm laptop launch would be a 3-year cadence from Ice Lake; at least a year too late to really be competitive. Ice Lake was also delayed by a year compared to the 2017 roadmap.)

Intel has stated that its whole product portfolio would transition to 7nm in 2022.

A 7nm-focused manufacturing and architecture day would of course be even better.

Another area where I would like to see a deeper discussion by Intel is with regards to its FPGA group, the Programmable Solutions Group (NYSE:PSG). Its vice president, Dan McNamara, left Intel last year, and the group also saw a quite substantial decline in revenue in Q4. More in general, the group has underperformed most of Intel’s other data-centric businesses.

While PSG has been quite open with regards to its 10nm Agilex roadmap, it might be interesting to hear if Intel has any insight in how it expects PSG revenue to progress in the near and longer terms, whether it can achieve similar growth rates as its IoT group, for example, and overtake Xilinx (XLNX) in market share.

Intel and Mobileye have provided quite some information about its progress and efforts into self-driving. However, information in some areas still seems to be lacking.

More specifically, any statistics/comparison in how its self-driving system is performing, the size of its fleet and number of miles driven would be welcome. While Mobileye has for example published a 20-minute video at CES in January and has stated that it wants to achieve 1000x better performance than humans, more generalized and actual results to date have been absent.

Additionally, any updates on its MaaS (robotaxi) joint ventures’ progress would also be useful.

Intel has not discussed its ICF foundry business for quite some time. Reports have come out about Intel losing customers at 10nm. So several questions could be:

Similar to FPGAs, a near and longer-term discussion of the Optane (3D XPoint) memory ramp would be useful. For example, what portion does Intel expect to be SSDs vs. DIMMs over time, and how big of a DIMM ramp does it expect within the next 1-2 years as proof-of-concepts translate to adoption?

Also relevant would be expectations of profitability. Intel has invested well over a decade in this product, but (when) will this translate into meaningful returns?

Previous PostTrump to announce ‘guidelines’ on reopening U.S. economy ThursdayNext PostSE: 'We Know We'll Get to the Other Side of the Storm' Says Airbnb's Lehane