Initial Claims Continue To Fall – So Does Unemployment

We’ve noted before that a precise definition of unemployment is a difficult philosophic concept. It’s also true that in our current times the usual official numbers aren’t entirely and wholly helpful.

However, we do still need to use these official numbers as a guide. Partly because they’re what we’ve got but also because, while not perfect, they are at least indicative of the direction of travel for the economy as a whole.

As to why unemployment interests us at all it’s because it’s an almost definitional guide to how much damage Covid is doing to the economy. The more people there are out of work then the worse the damage being done to production and incomes – production and incomes and their interface being what produces the profits we’re trying to chase in our investment strategies.

Exactly what will make a profit depends upon the specific company or situation, of course. But unemployment is that useful guide to the general level of profits across the economy that we’re chasing. That, in turn, means it’s a useful guide to stock indices as they’re a measure of those same profits at heart.

Again as we’ve discussed before initial claims are only a guide to the labour market, not a definition of it. It’s the number of people entering insured unemployment. It’s not even true that a higher number here is worse – that could just mean a higher turnover of jobs in a vibrant market. What matters is the balance between this inflow into the state of unemployment versus the outflow from it. It’s the stock of unemployment that matters, not that number starting to be in that state.

The advance number of actual initial claims under state programs, unadjusted, totaled 756,617 in the week ending October 17, a decrease of 73,125 (or -8.8 percent) from the previous week.

Even given the caveats above that’s a pretty good number. Or, even if we wish to be sceptical, it’s a decent change in the right direction. The much more important number:

The advance unadjusted insured unemployment rate was 5.5 percent during the week ending October 10, a decrease of 0.6 percentage point from the prior week.

However, it is the official insured unemployment count and so it’s comparable with other times in the economy. And however else we want to describe it week by week drops of half a percent of the labour force are really pretty good going. Unemployment has never dropped this fast before in the US economy. The reason why is obvious – ending lockdown – and yet even so. It’s not bad going. 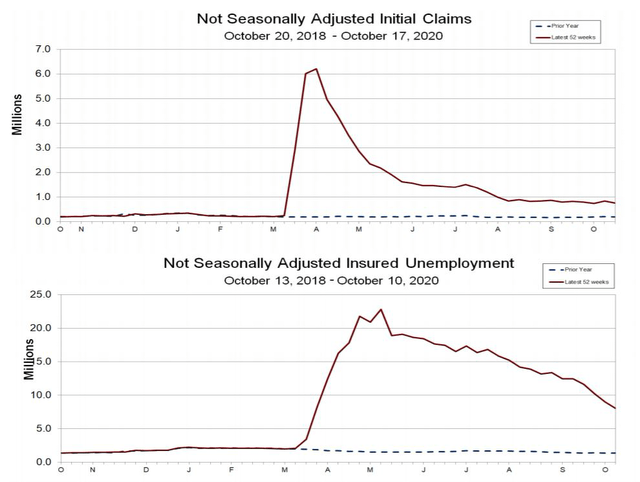 (Initial claims from Dept of Labor)

As we’ve got to say

Yes, we get the full employment numbers in a couple of week’s time. Then we can see how many people are processing out of the workforce entirely. That being the measure of the long term scarring the economy might suffer as a result of Covid. But sticking with the numbers we’ve actually got right now these are pretty good.

We’re not back to where we want to be and the situation isn’t great. But that’s certainly pretty V shaped as a recovery even if this is inverted.

I have long been vocally of the view that we’re going to have a V shaped and reasonably swift recovery. Within that I agree that it will slow down and that the last few percent will be more difficult. I’m not seeing anything to change my mind as yet.

The stock market is roughly priced to agree with that swift and V shaped recovery with the last little bit being more difficult. So, in viewing the macroeconomic indicators we’re looking for things which disprove that thesis. Initial claims and the much more important continuing claims numbers don’t disprove it. They’re entirely consistent with just such a recovery. Insure claims seem to be dropping by something a bit over half a percent of the labour force each week.

That isn’t going to continue all the way to our February levels, of course it isn’t. But as long as it does continue there’s not going to be widespread doubt about the continued improvements.

Stock prices and indices are thus consistent with the macroeconomy at present. We thus need to look to microeconomics, specific stocks and situations, for our edge in our investments.