As the world’s leading pharma companies race to develop vaccines for coronavirus, one man in India claims to have already found the cure.

Baba Ramdev, a black-bearded yoga televangelist close to Prime Minister Narendra Modi, is pushing ahead with sales of coronavirus kits containing traditional ayurvedic remedies, despite official warnings against branding them as a cure for the disease.

Mr Ramdev and his company, Patanjali Ayurved, have emerged as among the corporate winners in a country that is one of the hardest hit by coronavirus. But his controversial medications have drawn fierce opposition from critics who say India’s ayurveda industry should be better regulated.

The government’s ayurveda ministry said it had only given approval for Mr Ramdev’s kit of tablets and drops to be advertised as an immunity booster. The kit includes “coronil” pills, which contain herbs such as giloy, marketed as “the root of immortality”, and tulsi, or holy basil.

But Mr Ramdev’s initial guarantee his products will help people recover from coronavirus has resonated with a fearful public. The guru’s kit is so sought after, it is sold alongside Gilead’s remdesivir on the black market, according to local reports.

“We are still selling the medicine and there is tremendous demand for it,” said Acharya Balkrishna, who co-founded Patanjali Ayurved alongside Mr Ramdev. He casts the controversy as a battle between big pharma and the wisdom of ancient ayurveda.

“People are questioning our claim because we have spoiled a huge market for coronavirus medicine for them,” said Mr Balkrishna. “They [drug manufacturers] had inflated a big balloon, we have pricked a hole in it.”

India has the world’s third-highest number of coronavirus infections. There are more than 1.8m confirmed Covid-19 cases and 38,135 deaths in India after the country of 1.4bn people lifted a strict lockdown in May to restart the economy.

Though Mr Ramdev’s penchant for making astonishing claims has stoked controversy in the past, such as when he said yoga cured homosexuality, that has not stopped Indians from entrusting their health to him.

He is a champion of Swadeshi, or economic self-reliance, which resonates with India’s increasingly assertive Hindu majority. He was also a star backer of Mr Modi’s run for office in 2014.

While in power, Mr Modi has championed yoga and ayurveda, suggesting that earlier periods of foreign rule weakened Indians’ awareness of their own traditions.

During the pandemic he has repeatedly touted “immunity enhancing ingredients” linked to India, such as ginger and turmeric, and has said yoga is a “protective shield” against Covid-19. 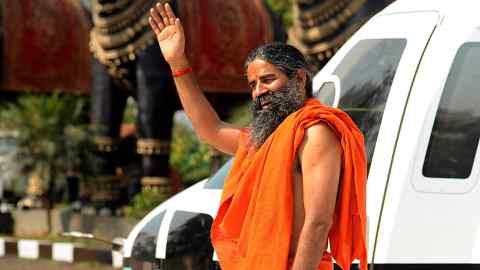 “The industry gets away with making ridiculous claims on most days but to make such a claim during a global pandemic is a first,” said Dinesh Thakur, a public health activist and former director of pharma company Ranbaxy. “People naturally want to know what exactly it [the government] is doing to reign in the industry from hoodwinking people.”

Aside from Covid-19-related remedies, Patanjali is a consumer conglomerate selling products that range from ghee to herbal toothpastes and hand sanitiser. The company is trying to reduce its Rs33bn ($440m) debt, accumulated during its rapid expansion across India, to take on multinationals such as Nestlé, Colgate and Unilever.

The company reported revenue worth Rs90bn in the year ending March 2020, its highest ever, and it is expected to reach Rs100bn this year.

Late last year, Patanjali made its first big acquisition, an insolvent edible oils company, Ruchi Soya Industries, whose share price rose as much as 7,300 per cent on its emergence from bankruptcy between January and June before collapsing 60 per cent.

Patanjali denied any knowledge of why the stock has soared. “How do I know why share prices are rising? We are not doing anything,” said Mr Balkrishna. “I’d say let the authorities investigate what is going on.”