KC Yusuf left home almost 30 years ago to work in hotel kitchens in Kuwait, one of millions from the southern Indian state of Kerala who travelled to the Gulf in search of a livelihood.

Mr Yusuf sent about Rs10,000 ($134) back to Ernakulam, his home city, every month, where he built a three-room home and helped support an extended family of 12.

But the 65-year-old had to fly home last month after the hotel where he worked was forced to shut down because of the coronavirus pandemic. His youngest son, who was employed at a bakery in Ernakulam, is also out of work.

“I have no money left,” he said. “I came back from Kuwait empty-handed when the hotel closed down. It’s got really tough now.”

There are likely to be major structural changes in the global economy, and Kerala is uniquely vulnerable

Mr Yusuf is one of hundreds of thousands of Keralans who are expected to return from the Gulf this year, according to S Irudaya Rajan, a professor at the Centre for Development Studies.

Kerala, a coastal state of about 35m people, has been lauded internationally for its strong public health response to coronavirus, which helped quash early outbreaks even as the virus accelerated around much of India and the globe.

But the mass return of migrants such as Mr Yusuf exposes weaknesses in the star state’s economy.

Kerala’s economy is powered by remittances from abroad. They are estimated to account for as much as a third of the state economy and are now under threat as Gulf countries rethink the role of foreign workers.

READ ALSO  Travelex falls into administration, with loss of 1,300 jobs

“There are likely to be major structural changes in the global economy, and Kerala is uniquely vulnerable,” said Reuben Abraham, chief executive of the IDFC Institute, a think-tank.

Tourism in Kerala has also been hit hard by the pandemic. International visitors used to flock to relax on the state’s pristine beaches, meander its rivers and canals in houseboats and explore tea plantations in its verdant hills. The sector accounted for almost a quarter of employment in Kerala, the state planning board said in 2016, with many of those jobs now at risk.

Kerala, which has had a long succession of communist state governments, has been celebrated for its “Kerala model” of development that built up robust healthcare and education systems, which are outliers in India.

But the lack of economic opportunity compelled many Keralans to leave en masse, with about 90 per cent heading for the Gulf, where they found work in construction and local services and sent money back home.

While lower oil prices had put pressure on those wages in recent years, total remittances from the Middle East and north Africa are expected to fall 20 per cent this year, according to the World Bank.

“Even though Kerala’s handling of the crisis has been commendable, an economic crisis looms large over the state,” India’s National Disaster Management Authority said in a recent report.

In January, Kerala became the first Indian state to record a case of Covid-19. But the ability to control the virus was helped by its experience managing the deadly Nipah virus in 2018, another disease that can pass from bats into humans.

But the virus is rampaging through India, and Kerala has not been spared. With the national caseload rising above 1.5m, new infections in Kerala have reached more than 1,000 a day. The surge in new cases was caused partly by returning migrants and the relaxation of lockdown measures.

The state government has subsequently put swaths of Kerala back into lockdown, including Thiruvananthapuram, the state capital of 1m. 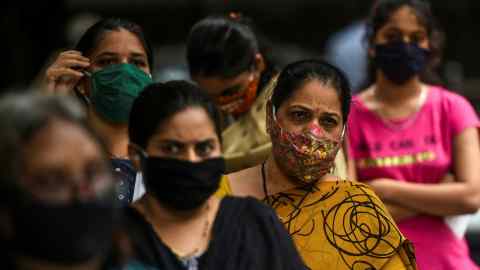 The wave of infections has prompted alarm, though Mr Abraham argued authorities were prepared. “The Kerala government knew all along that this would happen.”

But the renewed lockdowns and ensuing disruption have added to the strain on stressed businesses in the state. Sidarth Dominic, chief executive of hotel chain CGH Earth, started reopening some properties around Kerala to attract instate visitors but has had to moderate those plans.

“Wherever there’s a spike, there’s a containment zone created. It’s very challenging,” he said. “I don’t know how many [businesses] will survive the pandemic.”

Mariamma Philip, who hosted tourists at her home in the picturesque labyrinth of lagoons and waterways known as Kerala’s backwaters, said she planned to cultivate vegetables and chickens on her land to generate income.

Ms Philip said tour agencies that had sent international guests before the pandemic still owed her money. “We are going to take [farming] more seriously,” she said.

Economists said Kerala’s economic vulnerability was exacerbated by its comparative lack of manufacturing. While the industrial sector across India rebounded to about 75 per cent of normal levels in June, according to a Nomura index, services remained below 20 per cent.

“The problem is not that they’ll come,” Mr Rajan said of the returning migrants. The problem is “what are they going to do when they come back”?

Mr Yusuf, the former kitchen worker, said he was too old to return to Kuwait. But with so few options at home, he hopes one of his sons can follow in his footsteps and find employment in the Middle East.