India will ban imports of more than 100 types of military equipment in pursuit of Prime Minister Narendra Modi’s goal of greater self-reliance and amid a growing strategic threat from neighbouring China.

Rajnath Singh, India’s defence minister, said the import embargo would ensure about $53bn worth of defence contracts for Indian suppliers over the next six to seven years, including a $666m contract for 200 new armoured fighting vehicles.

The items designated for the import ban were selected after consultation with the armed forces, as well as public and private industry to assess the country’s defence requirements and production capabilities, he said.

Mr Singh added that a list of embargoed items — which includes artillery guns, short-range surface-to-air missiles, rocket launchers, radars, simulators and protective clothing — would be imposed on a rolling basis over the next four years. The embargo on the first batch of items will take effect this December and will be gradually expanded.

“This is a big step towards self-reliance in defence,” he said on Twitter. “This decision will offer a great opportunity to the Indian defence industry to manufacture the items . . . to meet the requirements of the armed forces.”

India was the world’s second biggest importer of foreign defence equipment after Saudi Arabia between 2015 and 2019, according to the Stockholm International Peace Research Institute think-tank. This included the procurement of fighter jets, transport aircraft, helicopters and howitzers to modernise its defence forces.

Traditionally, India purchased most of its weaponry from the then Soviet Union. New Delhi continues to look to Russia as a supplier and is spending $5bn on the S-400 missile system. But India is also now purchasing more of its advance weaponry and equipment from the US. President Donald Trump declared in February that Washington “looks forward providing India with some of the best, most feared military equipment on the planet”.

But many Indian strategic analysts believe the armed forces are overly reliant on imported equipment, which account for nearly 60 per cent of total military spending.

He welcomed Sunday’s announcement. “You really have to go cold turkey on imports if you must develop an indigenous industry,” Mr Karnad said. “We have quite extraordinary indigenous capabilities but the procurement process inevitably favours foreign suppliers.”

He added: “Once you are relying on foreign governments, the supply chain can be interrupted for a host of reasons.” 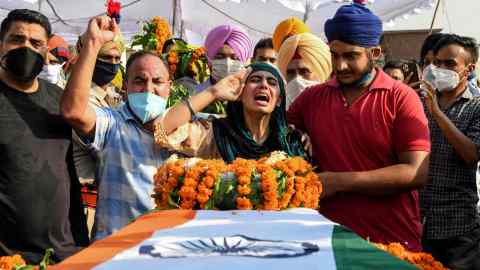 India is engaged in a tense stand-off with China along their disputed border in Ladakh, which saw more than 20 Indian soldiers killed in June.

Mr Singh said nearly $7bn from the military’s capital procurement budget for the current financial year has been set aside for domestic purchases. New Delhi aims to develop a mechanism for “the hand-holding of the industry” by the armed forces to ensure the embargoed items can be produced at home, he added.

The new defence procurement strategy is the latest effort by Mr Modi’s government to restrict imports and encourage domestic manufacturing as part of a new drive to build a “Self-Reliant India”.

India now requires licenses for the import of large-screen televisions and is looking at similar import controls on other items, such as air conditioners and toys. That has raised concerns that New Delhi is lurching towards a return of its socialist-era “license raj”.