India and Pakistan ramp up remdesivir production under Gilead deal

India and Pakistan have ramped up production of the coronavirus drug remdesivir under a licensing agreement with Gilead Sciences, but onward distribution to other developing countries has been slow.

Vamsi Krishna Bandi, managing director at pharma company Hetero, said there was no longer a remdesivir shortage in India — the country with the second-highest number of coronavirus infections in the world — and that the business had delivered about 800,000 doses of the drug domestically since starting production in June.

But while doctors in India are prescribing the experimental Covid-19 treatment, the majority of the 127 countries in the Gilead licensing deal have yet to start buying it.

Few countries “have actually put in a system for procurement”, said Mr Bandi, adding that few African countries in particular were placing orders. Hetero has exported to 25 countries, while Cipla, another Indian manufacturer, said it had only shipped to South Africa.

Developed as a potential treatment to the haemorrhagic fever Ebola, Gilead’s remdesivir inhibits the development of viruses in the body and was found to shorten recovery time from Covid-19. It received emergency use authorisation in the US in May after a large randomised control trial of more than a thousand patients showed that it cut the time to recovery to 11 days, from 15 days in the placebo group.

We have 100,000 doses today, we have nowhere near that level of demand in Pakistan

More recent trials in July, showed the drug may also reduce the risk of death, suggesting the antiviral treatment could do more than just speed up recovery.

Since May, Gilead has signed licensing agreements with nine generic pharmaceutical companies in India, Pakistan and Egypt to supply remdesivir to 127 developing countries, following a model pioneered during the Aids/HIV epidemic.

The licences are royalty-free for those countries until the World Health Organization declares the end of the Public Health Emergency or a Covid-19 treatment other than remdesivir, or a vaccine, is approved. The drug, which costs $390 for one dose in the US, costs as little as Rs2,800 ($38) in India.

“Currently, our licensees have made remdesivir available to patients in need in more than 40 countries, and we expect this number will continue to grow over the coming months,” Gilead said, adding “we are pleased by the rapid progress made by this effort”. 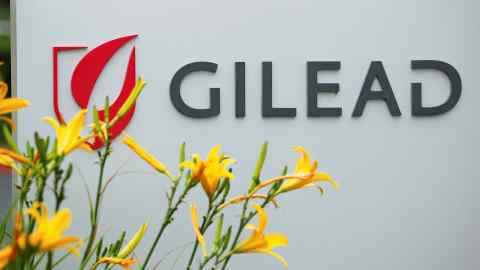 Osman Waheed, chief executive of Ferozsons Laboratories Limited, one of Pakistan’s largest pharma companies, said that he had a stockpile of more than 100,000 remdesivir doses after waiting weeks for healthcare authorities in Islamabad to approve exports.

Ferozsons is now shipping the drug to the Caribbean, Kenya and the Philippines, though is still sitting on large stocks after the Covid-19 cases in Pakistan declined.

“We have 100,000 doses today, we have nowhere near that level of demand in Pakistan,” said Mr Waheed. “The [coronavirus] burden on the healthcare system has almost dropped off a cliff.”

But in the US, where the coronavirus death toll is near 200,000 and generic production and distribution of remdesivir is not licensed, some hospitals have struggled to get hold of the drug. Gilead has said it would increase production to “treat to all eligible hospitalised patients” in the US and will be able to meet the “global real-time need” by October.

Leena Menghaney, manager of Médecins Sans Frontières’ Access Campaign in India, called on Gilead to expand the licensing deal to allow generic drug manufacturers to produce and distribute remdesivir cheaply worldwide. “They should allow licensed generic manufacturers to supply in upper middle and high-income countries as well,” she said.

Gilead said, “we do not anticipate any changes to the territory included in our generic licenses”.

Previous PostPeter Schiff: The Fed Is the Biggest Enemy of Legitimate Economic GrowthNext PostNYC Restaurants Debate Whether To Use New 10% COVID Surcharge