It has almost been a year since I had a look at Imperial Oil (IMO) here on Seeking Alpha, and I wanted to check up on this producer of heavy oil as the price for Alberta heavy oil has decreased to a single digit price per barrel. Imperial Oil previously touted low sustaining capital expenditures and is quite fortunate to have a long-standing relationship with Exxon Mobil (XOM), but I wanted to figure out how hard Imperial will be hit by the current abysmal oil prices.

Imperial: a large producer, but a much higher oil price is needed

Thanks to the decent production results (up from the 2018 and 2017 production results, I was expecting the downstream segment (the refinery division) to perform well but unfortunately an incident at Sarnia reduced the company’s flexibility, and the utilization rate of the refinery capacity dropped to just 83% after having averaged well over 90% in the previous two years.

As the price for Bitumen held up pretty well throughout 2019 (Imperial received an average price of C$50/barrel, which is approximately 25% higher than in the previous few years), it was able to protect the margins of its upstream segment against the lower NGL price (down 41% compared to 2018) and lower gas price (down 16% compared to FY 2018). The increase of the received price per barrel of bitumen was mainly related to the higher WCS price (Western Canadian Select) and a lower diluent cost.

Imperial reported a net revenue of C$34.1B and although this is approximately 3% lower than the revenue in FY 2018, its pre-tax income fell by approximately a third to C$2.05B. Perhaps a surprise given the relatively strong oil price, but the excise tax and fuel charges (+10%) and 8% increase of the production expenses caused the operating expenses to remain unchanged as they mitigated the impact of a lower interest expense, SG&A and a lower amount of purchased oil products. Interestingly, Imperial did get a C$154M tax credit (compared to a C$759M tax payment in 2018) and thie was the only reason why the net income fell by just 5% to C$2.2B. And as I explained in my previous article, Imperial Oil appears to be a believer in repurchasing its own stock so despite the 5% decrease of the net income, the EPS actually increased by 1 cent thanks to the continuous share buybacks throughout 2019. 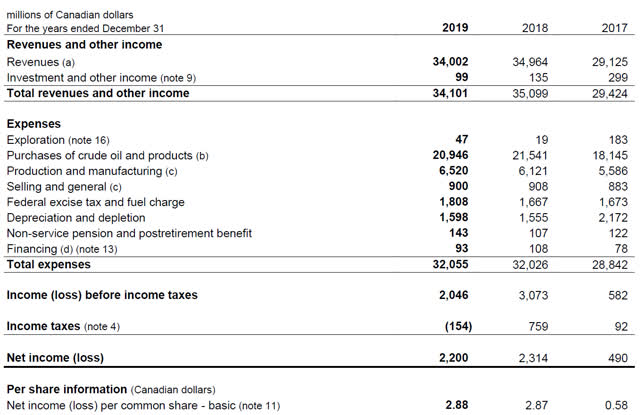 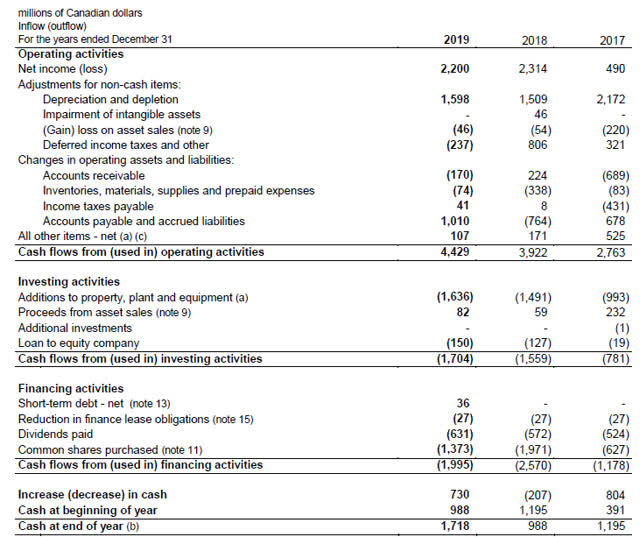 Given the current share count of 744M shares, that’s roughly C$2.63 per share (or just below US$2/share based on the current USD/CAD exchange rate).

Just a few weeks ago, Imperial Oil was referring to its history and tried to reassure the market the company was ready to ‘weather market challenges’. As Imperial is currently in a low capital investment period, IMO referred to the lower capital needs to keep the operations humming along nicely while maintaining flexibility to deploy its investment capital.

As the oil price continued to trade around multi-year lows (with the price for a barrel of heavy oil in Canada’s Alberta province dropping to less than US$5/barrel), more decisive action was required and Imperial Oil announced a substantial reduction to its planned level of investments. Whereas the oil company was planning to spend C$1.6-1.7B, it has now reduced this guidance by C$500M to C$1.1-1.2B. Most of the capex reduction is from deferred investments (with for instance the coker turnaround at Syncrude being deferred into Q3, while Imperial Oil has now also suspended its ongoing share repurchase program. Additionally, Imperial will also be able to save C$500M per year on operating expenses, and the combination of both should be a big help to the company. 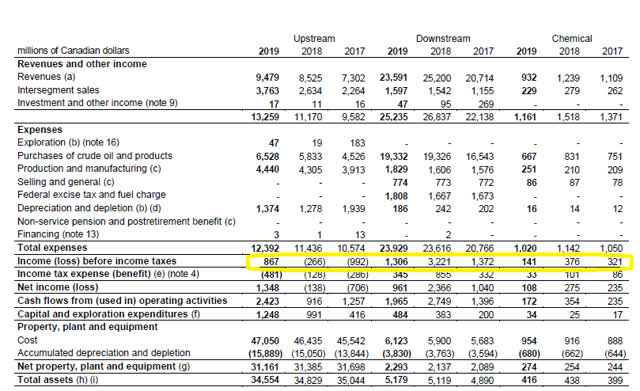 As Imperial Oil is an integrated company divided in an upstream, downstream and chemical segment, it’s difficult to guesstimate the impact of the low oil price on its business. Even in 2019, when the average oil price was around C$50 for Imperial’s type of oil, the upstream segment generated a pre-tax income of ‘just’ C$867M while the downstream segment reported a C$1.3B pre-tax income and the chemical division reported a C$141M pre-tax income. So the main question for Imperial Oil will be the efficiency of its refinery operations and the demand and pricing for finished products like gasoline and jet fuel.

Additionally, having Exxon Mobil owning in excess of 2/3 rd of the share count will help as Imperial will very likely continue to be supported by Exxon.

With C$1.7B in cash and C$5.2B in gross debt on the balance sheet, Imperial Oil can survive an extended period of lower oil prices, but the true impact will only be visible later this year. I currently have a small long position in Imperial Oil and am looking to slightly increase this position.

Take advantage of the TWO WEEK FREE TRIAL PERIOD and kick the tires!

Disclosure: I am/we are long IMO. I wrote this article myself, and it expresses my own opinions. I am not receiving compensation for it (other than from Seeking Alpha). I have no business relationship with any company whose stock is mentioned in this article.