There are a lot of things that rightfully scare investors away from investing in metal miners. Debt levels, high volatility, the illiquidity of the OTC exchanges, and just the general disdain towards precious metals from fiat-minded mainstream financial minds all play a role. I like gold. I like silver. I think they are an important part of any investment portfolio. I don’t know what that mix should be for you. It probably comes down to your personal risk tolerance, and nobody’s is the same. You could argue a 20% weighting is too much. Personally, I think 1-5% is probably way too little. Miners are not gold or silver. They are equities that can act as leveraged plays on moves in gold and silver. That’s what makes miners dangerous, but it also makes them exciting and potentially lucrative investments or trades, depending on your time horizon. Despite the bloodbath that has been the mining sector this month, I think the setup is highly skewed to favor bulls from here. I like IMPACT Silver Corp. (OTCPK:ISVLF) for a variety of reasons. But first, let’s just explore the fundamental setup for the mining space in general.

What we have been dealing with in the paper metal market can be described as a deflationary shock. We can also clearly see it in the stock market. Because the very nature of a debt-based currency like the US dollar can’t allow a large-scale deflation, it is all but a certainty that the Federal Reserve is going to drastically increase the balance sheet in an attempt to stimulate the economy and devalue the existing debt. For years, those predicting QE infinity from the Fed have been mocked. As it turns out, QE infinity is exactly what we’re going to get. And the Fed isn’t wasting any time. Looking at changes by week, at just under $4.7 trillion, the balance sheet is already moving upwards at a crisis-level pace. Even before announcing QE infinity, the Fed had already increased assets by 8.26% in just one week as of March 18th. Meaning, last week’s balance sheet move was the 6th largest weekly move by percentage in the last 2 decades.

Debt devaluation is currency devaluation. And a devalued currency is a tailwind for gold and commodities. When we look at how gold overlays with the balance sheet, we can see the two have historically had a relationship. Though gold has often led the rise, I believe precious metals are eventually going to start playing catch-up.

Gold has already started to make the move, as it ripped through $1,600/oz on 3/24. When gold eventually continues its bullish rise to new all-time highs, it will become too expensive for the average person to gain physical exposure. That is where silver comes in. We have seen in previous metal bull markets that when gold becomes unattainable or too expensive, silver is often picked as the substitute. 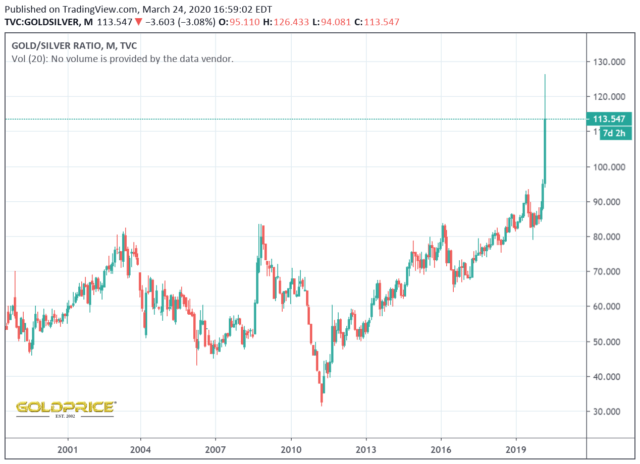 Just as we saw during the last recession, gold’s outperformance of silver will likely be vicious but temporary. Judging from the current candle on the gold/silver ratio chart seen above, we may have already seen the turning point for silver.

Because 89% of the company’s production is silver, it makes IMPACT Silver Corp. one of the purest silver plays in the mining sector. A glance at the financial history shows a company that is pacing its best annual operating earnings performance since 2016.

Say what you want about how each government body from country to country is handling the COVID-19 pandemic, one that has largely not flinched is Mexico. As of article submission, Mexico is still open for business. This is important because IMPACT’s mining operations are in Mexico. One of the notions I’ve seen online to explain miners’ performance lag lately while metals move higher is the risk of the mines actually shutting down because of the pandemic. That’s a valid concern. To this point, IMPACT isn’t facing a forced shutdown. We can find numerous examples of physical supply issues in the metals space. Not only would a silver supply shock benefit silver producers, but if COVID19 does indeed force mine closures around the world yet IMPACT is one of the few that stays open, it’s easy to quickly see how the company could see a sharp rise in the bid for its product.

Even with modest precious metals price appreciation, we could potentially see more zones become viable purely because of a decrease in operational expense.

For miners, the increase in margin isn’t just attributable to an increase in the price of the product they sell. That oil has plummeted helps them keep mining expenses down considerably, as energy is a large cost in production. 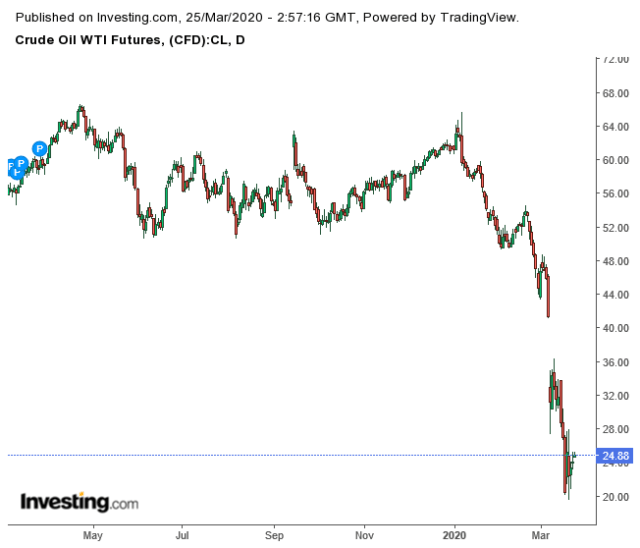 With WTI crude getting crushed about 60% this year, miners stand to benefit from far cheaper oil prices. This leads to a lower all-in sustaining costs and better margin on production.

Though it is not always the case, miners sometimes lead gold and silver in both directions. For much of the last 9-10 months, it’s actually the miners that have outperformed the metals. What I find interesting is how badly they have lagged year to date. Again, this is possibly out of fears of impending mine closures. 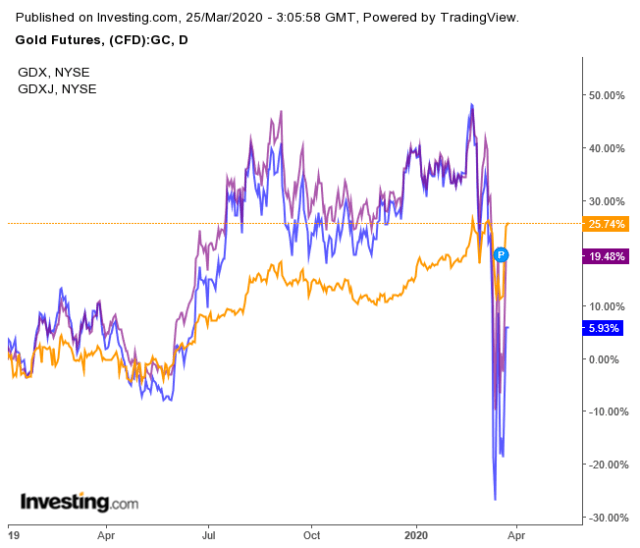 Deflation could last much longer than I anticipate. This could keep precious metals from rising in dollar value. Potentially of bigger concern, precious metal mines could be shut down and workers sent home because of COVID-19. This would likely help gold and silver from a physical standpoint because of a supply crunch, but it would almost certainly hurt low-inventory miners who are unable to conduct business.

Furthermore, even if IMPACT isn’t one of the producers suspending operations in a hypothetical mining shutdown scenario, there is no guarantee that its mines return the grades or ounce numbers that would be expected. Though the company doesn’t have high levels of leverage, there is not a tremendous amount of cash either. This could point to immediate cash flow concerns that may force the company to seek out financing or conduct share offerings. Given the current global economic environment, there is no guarantee of future financing, should it become necessary for the company to continue operations.

Despite the risks, it is hard for me to imagine metal miners and, particularly, IMPACT Silver Corp. having a better fundamental set-up than what they have right now. Their energy costs have just plummeted. The product they produce is likely going to appreciate in value after what I believe will be a brief deflationary shock. And the gold/silver ratio is at such an extreme that silver has the potential to rip higher very quickly as metals appreciate. If that happens, miners highly levered to silver could see very large gains in a very short amount of time. IMPACT Silver is one of those miners. The company also operates in a jurisdiction that doesn’t seem to be entertaining a state-mandated economic freeze. IMPACT Silver is my pick from a large selection of very depressed mining share prices. I want to be very clear, this is a risky name for a variety of reasons. It’s also an illiquid stock trading over the counter. Though it has a very small weighting in my portfolio, I am bullish and view the potential upside to be many multiples from current levels.

Disclosure: I am/we are long ISVLF. I wrote this article myself, and it expresses my own opinions. I am not receiving compensation for it (other than from Seeking Alpha). I have no business relationship with any company whose stock is mentioned in this article.

Additional disclosure: I am not a financial professional. Please do your own research when making investment decisions.