Fannie Mae (OTCQB:FNMA) and Freddie Mac (OTCQB:FMCC) are two companies regulated by the Federal Housing Finance Agency (FHFA). “FHFA is confident that the final rule puts Fannie Mae and Freddie Mac on a path toward a sound capital footing,” Mark Calabria said in a statement. President Trump put Calabria in charge of FHFA last year, and since then, FHFA has been following the law. FHFA just finalized the capital rule. FHFA says that finalizing the capital rule was required by law, and so this rule was long overdue:

Finalizing the capital rule is the beginning of the end. Now that we know how much capital Fannie and Freddie need to be determined adequately capitalized, it’s time to figure out how to get there.

Investment Thesis: Finalizing the capital rule is like lighting the fuse that explodes with a public offering based on incoming capital restoration plans put together by Fannie and Freddie and their underwriters JPMorgan (NYSE:JPM) and Morgan Stanley (NYSE:MS). With the capital rule finalized, the next major step is the amendment of the senior preferred securities purchase agreement (SPSPA/PSPA). Given the market response to the capital rule was slightly bullish for junior preferred and completely muted for common stock, I expect this next leg to be more evenly split with both common and preferred going up about the same amount when the PSPA amendment comes out. A PSPA amendment is necessary in order to allow Fannie and Freddie to both retain and raise capital. The finalized capital rule is so heavy that there’s no way that Fannie and Freddie can get there in reasonable time without raising capital. As such, Treasury will need to amend the PSPA in the context of the litigation in such a way that it permits the largest IPO in history. The only way to do that is to reclassify the net worth sweep as payments against the liquidation preference to attract hundreds of billions of equity capital.

READ ALSO  What No One Is Saying About The Lockdowns

The SPSPA Amendment is what is necessary to allow Fannie and Freddie to actually obtain the amount of capital as proposed in the now final capital rule. According to American Banker:

The capital framework, released Wednesday, is a prelude to steps the FHFA is expected to pursue to allow the mortgage giants to retain all of their earnings, senior FHFA officials said.

According to Bloomberg, FHFA is working hard with Treasury to finalize the PSPA amendment:

A different senior FHFA official said the agency and Treasury Department are actively negotiating an amendment, which the FHFA wants to finalize this year. 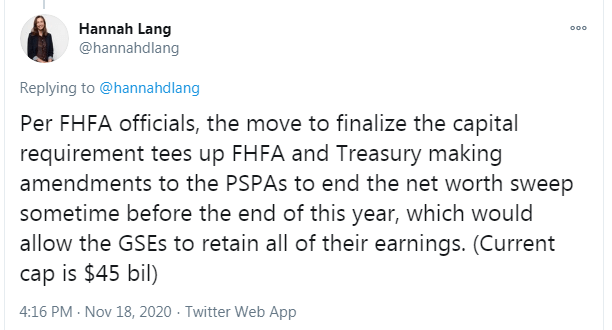 ACG Analytics has the PSPA Amendment happening between now and January 20th in their most recent reform timeline: 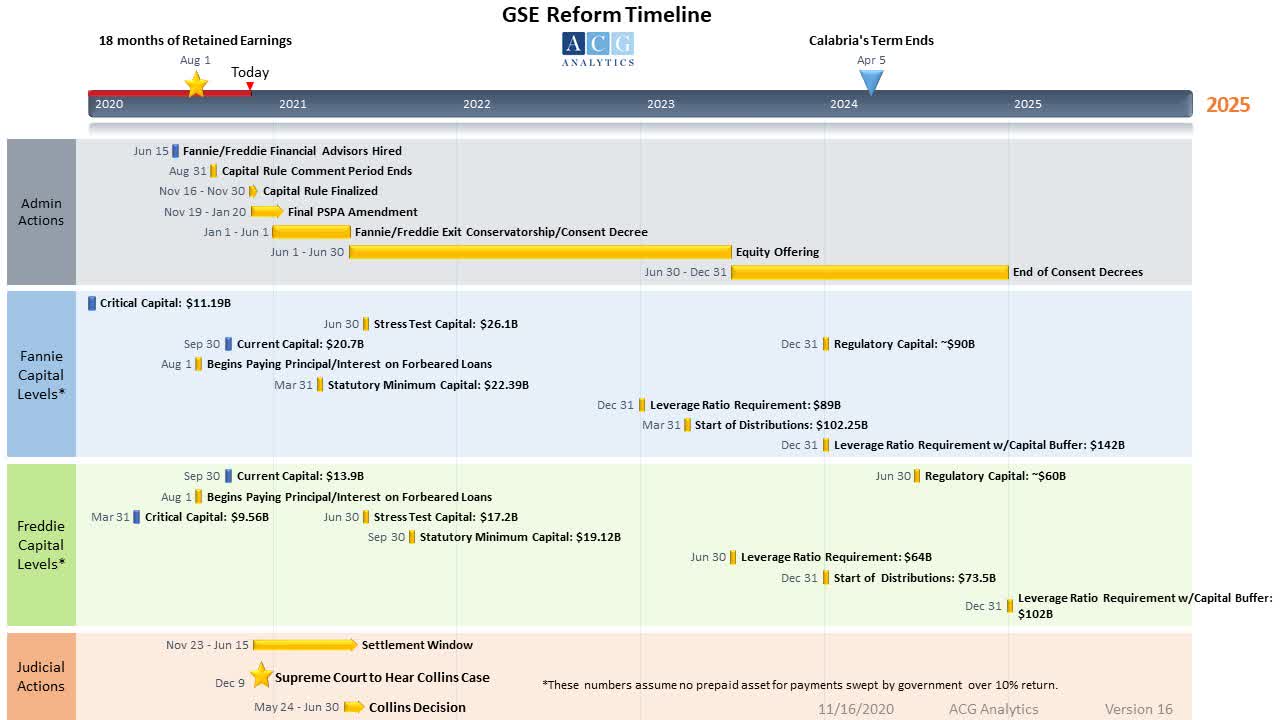 I have heard that the current roadblock of the PSPA amendment is the continuing resolution, so we have to wait for that to get resolved. I have also heard that it is coming before Christmas and even Hanukkah.

These don’t need to be done ahead of inauguration since these are an FHFA issue, not a US Treasury issue. That said, capital restoration plans (CRPs) are detailed in the Safety and Soundness Act of 1992: 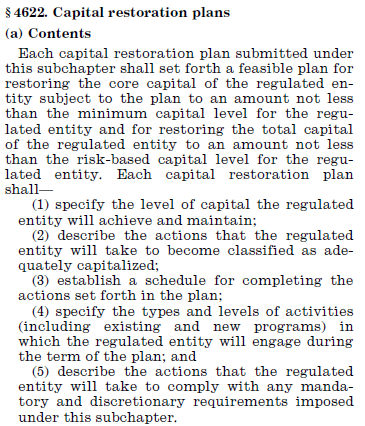 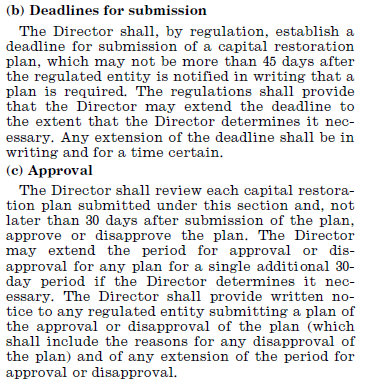 Fannie and Freddie have up to 45 days to submit, and FHFA has 30 days to approve.

According to the Wall Street Journal, Mnuchin and Calabria have been meeting on the PSPA Amendment already:

Mr. Calabria has met twice recently with Mr. Mnuchin to discuss an expedited exit of the companies from government control, most recently the week of Nov. 9, according to people familiar with the meetings, which also involved Larry Kudlow, the director of the White House’s National Economic Council. Mr. Mnuchin was noncommittal about the push, the people said.

In fact, Mnuchin is supportive of locking in a path to private ownership:

One person familiar with the effort said Mr. Mnuchin is supportive of locking in a path to private ownership but mindful of steps that could disrupt the housing-finance market.

According to the author, there is still time to lock in an exit, whereas, last week, there was not, so this is a huge update: 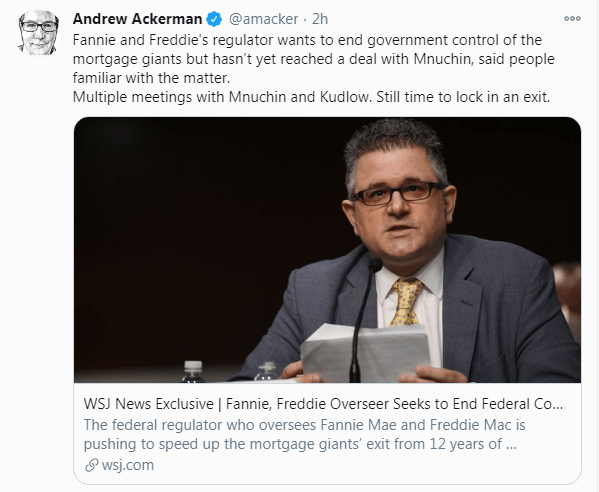 Andrew Ackerman also talks about the liquidation preference writedown that is incoming as being a boon for shareholders:

Unfortunately, with a capital rule this high, the only way the companies will be able to retain and raise enough capital to actually meet this capital standard is for Treasury to write down its liquidation preference. I say this because I know that Treasury isn’t about to pony up over $100B to settle the legal claims because they are trying to divest not invest, and so this is the path forward.

I don’t think dividend rates on the preferred stock matter because I don’t expect any to be paid or for these terms to factor into conversion terms. I expect that because the conversion terms will be determined when settling the Lamberth contract claims, the value of those claims will drive those terms and those claims are par plus a fixed percentage interest straight line since the time of the net worth sweep. An example would be par plus 6% per year from 2012 to present or 8 years so about 148% of par. I am not even sure if Fannie preferred are better or worse than Freddie preferred based on this capital rule.

I do want to offer a reading suggestion when you’re doing your own homework here. What I do know is that, when reading information about the incoming PSPA amendment, it is important to understand that there are two camps. There is the camp of the current administration, and then there is the camp of those who say they speak for the Biden camp. The Biden camp includes people who are generally against Fannie Mae and Freddie Mac like David H Stevens and Jim Parrott, who have been featured all over the place lately, urging caution to investors saying that Biden will stop everything and reverse everything. For example, Parrott recently said:

The capital rule is a nice example of how the path that Calabria has the GSEs on is likely to run counter to the way in which an incoming Biden administration is going to think about what is helpful coming from policymaking around the GSEs.

My advice is to listen to what these guys have to say, but my view is that these are the guys who were parading around narratives that got us into this undercapitalized disaster in the first place. Notably absent in articles supporting narratives like this is quotes from current FHFA and Treasury officials. I recommend only taking what current FHFA and Treasury officials are saying seriously. Given that the current administration is making unstoppable progress towards getting Fannie and Freddie out of conservatorship, especially with the finalization of this capital rule, it’s been no surprise to me that those opposed to this have come out in force lately. Further, the PSPA amendment is not a complicated thing to do. Don’t forget that there are so many advisors involved, not to mention Milbank, a law firm specifically engaged by FHFA to provide legal services related to ending the conservatorships. I’m pretty sure an amendment like what I expect is far from complicated, except maybe politically.

If you ask me, things have never been better, and the prices of the preferred stock still don’t reflect it. Given the legal challenges, I don’t see the senior preferred converting to common, so I think that the SPSPA amendment that is incoming later this year will likely be a positive catalyst for both common and preferred shareholders. That said, I still only own preferred securities. Consent decree is where this is going, and it’s going to solve everything and make it so that the steps FHFA and Treasury take to close out this administration are irreversible. I waited two and a half years for this capital rule to be finalized. The next two and a half months are the golden days of junior preferred shareholders. I am so excited to be here. There is still so much opportunity to capitalize on, and that’s why I’m writing this update. Not everyone understands that this has more than just this small upside move. If this was a meal, for example, you just had half of your first appetizer. You still have another appetizer, the main course and dessert. Dinner is being served, and it’s time to eat. Happy Thanksgiving Ya’ll!