IMF October Buys: The 13 Stocks Added To My Fund

With the market down a little bit last week, I decided to put my monthly capital to work on October 20th. With the benefit of hindsight, I could have gotten better prices waiting another week. As such, there’s now an opportunity to go bargain hunting on these stocks at even better prices. In any case, here are the purchases for the month:

The figures are larger than normal, as proceeds from the recent FedEx (FDX) sale were combined with the usual $1,000 of monthly capital to fund the purchases. In addition, last month’s received dividends were invested into Reynolds Consumer Products (REYN). REYN stock has now slipped to less than 16x forward earnings despite running a stable low-risk business, and one which is getting a sales boost from COVID-19, and the company recently said it sees results at the top end of guidance. Yet, shares are still lingering around $30 for now. That will change.

Let’s start off with picks I’ve written about recently. We have TFS Financial (TFSL). I laid out the detailed math for this one. Depending on daily price fluctuations, either TFS Financial or Hormel Foods Corp. (HRL) is the IMF portfolio’s largest holding. The only thing concerning me at all on TFSL is that it’s already a large position in a sector – regional banks – that I also own plenty of. But at this price, even accounting for concentration, I’m almost compelled to keep adding regardless. I expect TFSL stock to head back on up to $22 as the economy normalizes, and even if the share price gains are delayed, the 7% dividend is a nice reason to stick around in the meantime.

Also in recent write-ups, I’ve laid out the bull cases for Walmart de Mexico (OTCQX:WMMVY), Corporacion America Airports (CAAP), and Danone (OTCQX:DANOY), so I’ll just refer back to my recent work as far as this month’s buys go.

I wrote up Bruker Corp. (BRKR) as well recently, but I’d just like to reiterate that I feel strongly about the opportunity there. Various scientific tools and instruments stocks have already surged back to new all-time highs, and Bruker is still languishing down 25% from its recent peak. There’s a great chance of the company catching up with peers and the stock running from $42 to the $50s in early 2021, and if not, downside is modest here. I love these sorts of set-ups, particularly in more growth-heavy names. I’m not aware of many set-ups to get consistent double-digit earnings growth in a good industry/management team like this at the present valuation.

I’m also a continued buyer of Diageo (DEO). Since I last covered the company, it announced an excellent business update for both the U.S. and Europe. About the U.S., for example, Diageo said that:

“Our U.S. business is performing strongly and ahead of our expectations, reflecting resilient consumer demand and the spirits category continuing to gain share within the total beverage alcohol market. Increased retailer confidence is resulting in some re-stocking in the off-trade channel. The on-trade channel is now open in all states, with some capacity restrictions.”

Despite this, DEO stock is only up slightly since I last purchased shares. It is trading at an unjustifiably cheap price if you assume that the company will recover in due time from COVID-19. With the company already saying sales are back on track, the price makes little sense down here. According to analyst estimates, the stock is at a touch under 20x FY’22 earnings and under 17x FY ’23 earnings:

People waiting for bars and restaurants to be back to normal capacity are going to miss an attractive entry price here. Unlike many COVID-19 impacted stocks, Diageo has recession-resistant cash flows and an excellent balance sheet. So, there’s little doubt that the business will get back to normal in due time. Thus, I’m not particularly concerned if this purchase is a bit early; shares will be much higher than here in 2-3 years.

Switching gears, as I said last month, after avoiding the energy sector since the Saudi price war announcement in March, I’m finally, tentatively buying in the sector. So far, avoiding energy this spring and summer has been the right call, as that sector utterly failed to take part in the subsequent recovery unless you timed your trade just right. From June on, energy has wildly underperformed: 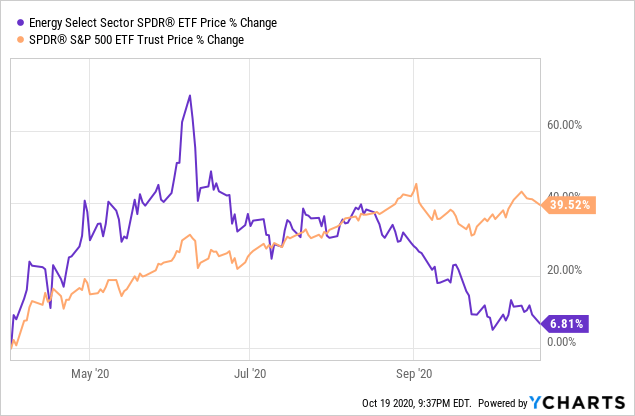 However, at some point, the energy stocks will catch a bid again. That said, for now, quality is the focus. No turnaround energy names, no high beta, none of that. When oil shows sustained demand pick-up, there will be a time for more speculative plays.

But for now, I’m sticking to the best – which for producers is Canadian Natural Resources (CNQ) and Suncor (SU). They have the lowest production costs and the longest-lived resources. And in pipelines, I’m adding to the Enbridge (ENB) position, though TC Energy Corp. (TRP) would be an equally fine choice.

Johnson & Johnson (JNJ) is not a new position for the IMF portfolio. But it probably feels like one. I bought the stock just once in early 2016 back at an entry price of $98. Shares promptly went up and it dropped off my radar. I’ve resisted averaging up to the position for a while, in particular as J&J has been plagued by lawsuits and underperformance out of certain business segments.

At some point, though, it’s worth taking a fresh look. We’re now at that point for JNJ stock.

As you probably know, J&J has extensive businesses in pharmaceuticals, medical devices, and consumer products. Its pharmaceuticals division is the largest, and thus, is a risk factor for the company. Pharma businesses tend to trade at low P/E ratios even in good times, due to the loss of cash flows with patent expirations.

Risk mounted last year as it appeared that Bernie Sanders had a credible path toward the White House. That, in turn, could have led to a dramatic overhaul of the entire health care system. However, once Joe Biden won the nomination, the threat to pharma profits greatly decreased. The odds of major changes to the industry are quite low under either a Biden or Trump administration. So, J&J’s pharma business should be fine through at least 2024.

Meanwhile, medical devices is getting going again after the COVID-19-induced slowdown. And J&J’s consumer products, while arguably underearning their potential in recent years, got a boost from COVID-19. All in all, Johnson & Johnson handled the pandemic fine.

The major issue with J&J is its slow growth. Over the past 10 years, the company has grown revenues, earnings, and free cash flow all at a 3% clip annually. 3% is better than nothing, but barely topping inflation isn’t too exciting either. That said, off the starting earnings base, you don’t need a whole lot of growth to do alright: 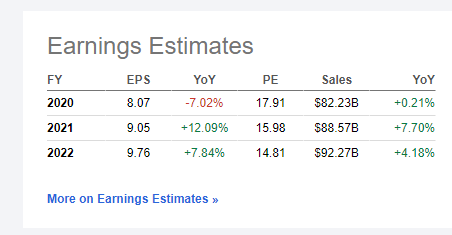 Investors should still use caution. This is the sort of business that, given its heavy pharma exposure, could easily slide to a 12x-14x earnings multiple on a sustained basis if revenue growth goes to zero or negative figures. However, as long as management can continue to grind out small increases, the stock should have reasonable upside from here.

Like I’ve said about other such stocks this fall, this isn’t something that would be on my radar if the S&P were still in a bear market. But with stocks back near all-time highs (at least until this past week), getting a 7% earnings yield and a steady growing dividend from a low-drama blue chip is quite fine. Even in a market where people are chasing yield, JNJ stock is offering its usual 2.7% yield or so. As you can see, this is a perfectly fine starting offer for J&J: 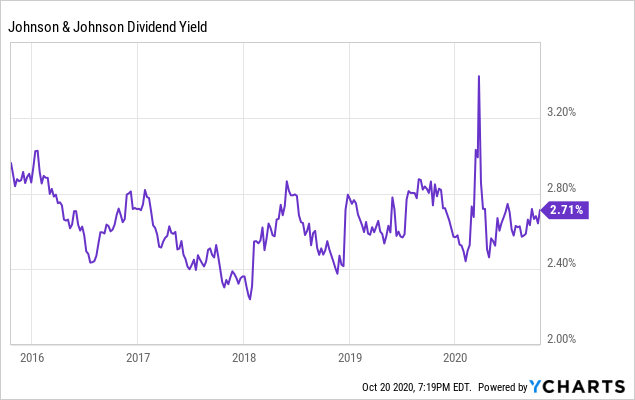 A 10% correction, which would take the yield to 3%, would mark a juicy entry point. That said, the current one will do well enough for buy-and-hold investors – JNJ stock hasn’t regularly yielded more than 2.8% within the past five years.

Finally, we have the new portfolio position for the month. And let me be clear from the outset, Northwest Natural Holding (NWN) is not much of a capital gains stock. In fact, with the recent sell-off, shares have now been flat for the past 12 years, and have merely doubled since the year 2000 on a share price basis.

However, Northwest Natural Holding, as a long-running Dividend Aristocrat (64 years in a row of increases), is a huge dividend payer. Thus, as a result, despite ho-hum stock price returns, the stock (until March) had kept up with the S&P 500 in total returns: 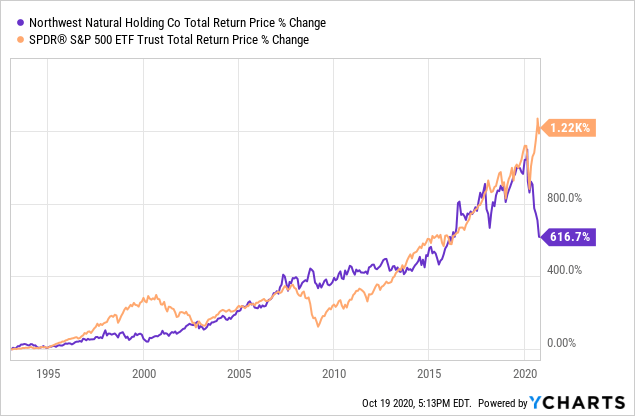 Even after the recent drop, NWN stock has still delivered a more than 600% total return over the past 25 years or so. And historically, it has done so with less volatility than the S&P 500. Northwest Natural Holding missed out on the market’s big sell-offs in both 2001 and 2008, for example.

Now, with the decline this year, the stock is back to levels it last routinely traded at in the early 2010s: 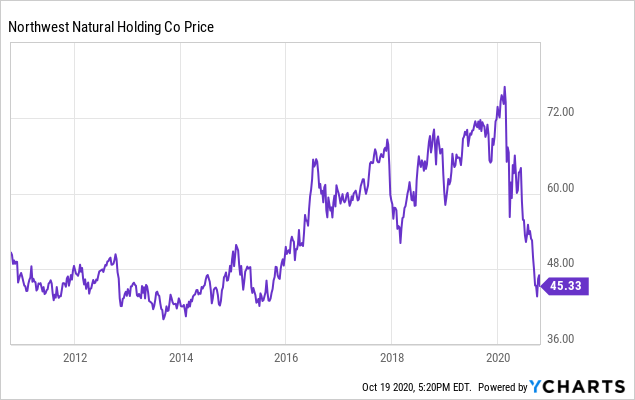 The share price has been under pressure this year with traders fretting about utilities being unable to collect on late payments, along with the political uncertainty in the city of Portland. Fellow Oregon utility Portland General Electric Co. (POR) has seen similarly weak performance in 2020.

Zooming out, however, I’d argue that 2020 merely reversed an overdone run-up in shares of Northwest Natural Holding (and many other utilities). Since I launched the IMF portfolio in 2016, I’ve bought hardly any utilities, as prices soared almost solely due to the interest rate trade – lower interest rates make income streams from stable companies more valuable. There wasn’t any particular move higher in earnings for these utilities though, so the fundamentals underneath those share prices were always a little questionable.

Now, with something like NWN stock, the past five years of share price gains have disappeared, and the stock is back to being a solid bond alternative. You get a 4.3% starting dividend yield and very modest annual dividend increases. It wasn’t a good move to pay $70 for the stock earlier this year and lock in a mere 2.7% yield. Here, it’s quite a different matter, though:

Now, the price is much less demanding. You get about $2.50/share of earnings post COVID-19, so that’s around a 18x P/E. That means a starting 6% annual earnings yield, with 4.3% of that coming right back to you as dividends.

Even if the utility has no growth at all (which has been fairly close to what’s happened in recent years), you still get your 6% base return from the earnings yield. And if management can figure out how to get just 3-4% EPS growth, you’re close to a 10% expected annual return, with more than 4% of that coming off the dividend. This isn’t exciting stuff by any means, but if you’re looking to fill out a portfolio with a few bond alternatives, this is the sort of thing that should be on your radar.

Finally, I’d note that Northwest Natural Holding has been gobbling up small water utilities, diversifying away from its usual natural gas business. The market much prefers water to other types of utilities, and as Northwest Natural grows its revenue share from water, the yield should move lower to reflect the higher quality of earnings. That, in turn, could get the stock moving back up to $60 or $65 in due time.

This is an Ian’s Insider Corner report published October 21 for our service’s subscribers. If you enjoyed this, consider our service to enjoy access to similar initiation reports for all the new stocks that we buy. Membership also includes an active chat room, weekly updates, and my responses to your questions.

Disclosure: I am/we are long ALL THE STOCKS IN THE TABLE. I wrote this article myself, and it expresses my own opinions. I am not receiving compensation for it (other than from Seeking Alpha). I have no business relationship with any company whose stock is mentioned in this article.