The second wave of coronavirus infections and lockdowns poses “a considerable risk” to the eurozone economy, the IMF has warned, adding that recent progress on vaccines will not deliver a recovery in the near future.

The gloomy short-term outlook means the bloc needs more support from both fiscal and monetary policy, the fund said in a report on the conclusions of its latest official visit to the eurozone.

The EU might need to provide “solvency support” to businesses, the IMF said, and it called on the European Central Bank to consider “direct support” to companies if bank lending started to dry up.

Governments should switch from shielding economies from the impact of the pandemic to prioritising support for companies that are most likely to prove viable once the crisis is over, “while facilitating the exit of unviable companies” and boosting overall demand, the fund added.

The launch of the EU’s €750bn recovery fund — which has been delayed by disagreements between member states — could provide “a meaningful boost” to growth if implemented effectively, the IMF said, although it warned that “further delays would damage euro area recovery prospects”.

The IMF said output in the final three months of this year and the first quarter of 2021 was likely to be weaker than expected because “rising infections and reimposed lockdowns have damaged confidence and lowered mobility”.

The ECB is due to announce its latest monetary policy decision on December 10, when it is widely expected to expand its €1.35tn emergency bond-buying programme and its €1.5tn of ultra-cheap loans to banks. The IMF said a further cut in the ECB’s deposit rate from its record low of minus 0.5 per cent “should also be considered”.

“What has been done is unprecedented, it deserves praise, but we need to recognise there is plenty still to do especially for the vibrancy of the eurozone economies,” said Kristalina Georgieva, the IMF’s managing director. “We are still in a place where the motivation has to be hope for the best but prepare for the worst.” 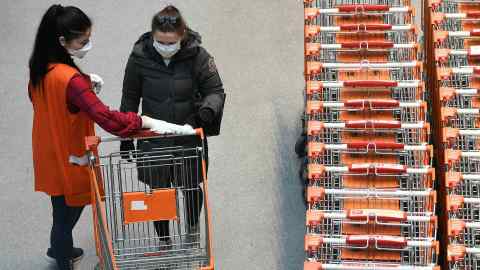 Alfred Kammer, head of the IMF’s Europe department, said that in a severe scenario the ECB could set up a special-purpose vehicle to lend directly to small businesses, similar to the $600bn Main Street Lending Program launched this year by the US Federal Reserve.

“With the ongoing second wave, national fiscal policies will likely need to provide broad-based support for longer than initially envisioned,” the IMF said, adding that “as the recovery gains traction, the focus should gradually shift to facilitating reallocation of labour and capital, sustainably boosting inclusive growth and reducing fiscal vulnerabilities”.

The IMF said the EU’s fiscal rules, which restrict the size of public deficits and debt levels but which were suspended at the start of the pandemic, should be reintroduced only when they had been simplified and the recovery had firmly taken hold.

It said there was a risk of “adverse market reactions” for countries with high debt levels that provided extra fiscal support to their economies and had “sizeable contingent liabilities”.

The €750bn EU recovery fund and the European Stability Mechanism, which provides bailout loans to governments, “can help to mitigate such pressures”, the IMF said. “In a severe downside scenario, augmentation or expansion of defences may be needed,” it added.

Eurozone banks have been blocked from paying dividends or buying back shares since the start of the pandemic and the IMF said regulators should maintain these restrictions until the recovery was “well under way”.