Ilika Plc: Some Points To Consider In Valuing Its Shares (OTCMKTS:ILIKF)

Ilika plc (OTCPK:ILIKF) is a U.K.-based battery developer which is scaling up pilot production on a pathway to commercialization. That has led it to tap the equity markets again this year. My investment thesis is that at this point the whole value of the company rests in its ability to produce proprietary battery technology at scale and profitably. The company continues to be upbeat about its prospects in that regard, with the CEO recently giving an interview on point. Unless one has a strong technical point of view about the battery technology and likely commercialization prospects based on the company’s work to date, it seems like a highly speculative investment. The publicly-traded company shows no intrinsic profitability and few commercial revenues, so it is a punt on the technology scaling. I am avoiding for now.

The Company has Sufficient Liquidity, Which Helps its Survivability

A lot of industrial research is a race to get to the right answers before the competitors do, the market changes, or the money runs out. So for a company such as Ilika, liquidity is important. In general, the company needs money to scale up pilot production and move into larger-scale production at a time when revenues remain low.

That has been the case this year, for example, as it sought to scale up manufacturing on the Stereax product line. Accordingly, it had an equity placing in April which raised net proceeds of around £14.2m. £8m of that is earmarked for production facilities. It is also worth noting that the offering was oversubscribed, which suggests that the company can tap equity markets again should it need to, providing further reassurance on liquidity. In its trading update earlier this month, the company said that it had cash and cash equivalents of £12.4m at the end of October.

Additionally, the fairly modest cash burn is not worrying as long as the company is able to raise funds via share placings, which to date it has been able to do. The most recent placing more than covers the planned cost of scaling up Stereax production. Moreover, it is not the only share placement which the company has used to bolster its finances. So, while cash flow exceeding financing came in negative again last year, at -£3.7m, when the financing is taken into account, cash flow was positive, at £10.4m. This maintains a pattern of positive cash flow driven by financing activities – the same was true in 2019. In 2018, positive cash flow was driven by investing activities, while in 2017, cash flow while negative (-£0.5m) was helped by net proceeds of £5.8m from share placement.

Funding Has Come at the Cost of Dilution

In the 2010 figures, for example, the weighted average number of shares in circulation was 121,339. It now stands at over 100 million. That growth is so large that the 2010 number barely even registers on the graph below.

Since 2011, dilution has been less dramatic, but it has continued apace. The company has a clear history of diluting existing shareholders and I assess that its development model means that that is likely to continue for the foreseeable future, while it is still in cost-incurring development mode. 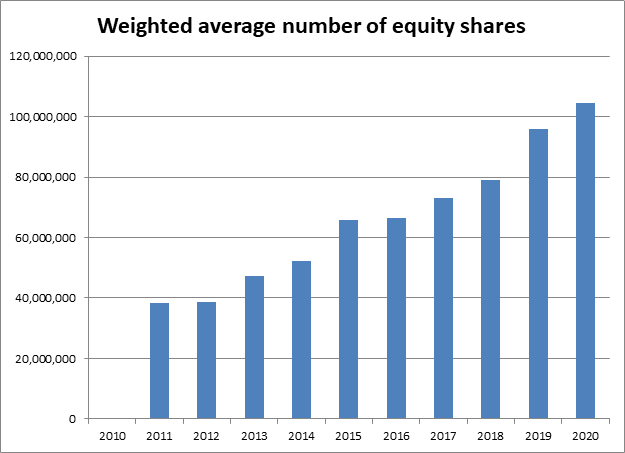 So, if Ilika does eventually roll out its technology at scale and profitably, it is likely that the profits would be spread over a wider pool of shares than exists today, based on consistent historical precedent. That means that the valuation of shares currently needs to look not just at the possible size of the prize, but also its likely distribution.

Commercial Revenue Has Been in Long-Term Decline

The company’s multi-phase growth strategy calls for a first phase in which revenues are small while its concepts are proven, before using more money in a second phase which scales up production and therefore revenues, before going into full commercialisation. That is why revenues look small compared to market capitalisation and also why revenue growth has been weak.

In fact, it’s worth digging into the revenue numbers in detail. The company’s turnover has grown in the past several years, though still remains negligible at under three million pounds per annum, which gives the shares a price to turnover ratio of 49x at the current share price. That already sounds very high. But for Ilika, turnover is not just commercial revenue, it also includes grants received from the British government. In recent years, these have taken on more prominence. With the company’s increasing pivot to batteries, former commercial revenue streams such as medical have fallen away, such that revenue has not touched seven figures since 2011-2013. 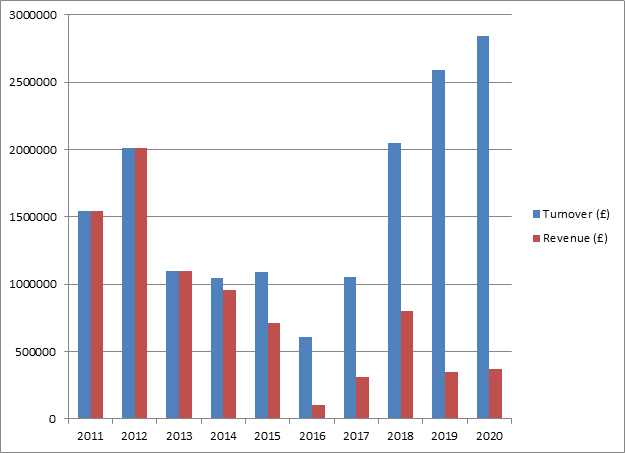 Such an approach could make sense where a company is working on early-stage discovery and commercialisation, which is what Ilika says it is doing. So in and of itself, it doesn’t necessarily have negative implications for the investment case. However, it is worth noting for a couple of reasons – first, the company’s turnover growth in the past five years has been driven not by commercial revenue, so is a somewhat misleading indicator of apparent growth unless one digs into it more closely. Secondly, the shift away from commercial revenues and towards relying on grants to develop the battery technology represents a clear strategic direction of travel. Therefore the investment case for Ilika at this point – unlike, say, 10 years ago – relies on a level of confidence in its ability to commercialise its battery technology profitably.

The investment case for Ilika shares for the foreseeable future relies on capital appreciation in the share price alone, in my view.

Ilika: Know What You’re Getting Into

I don’t attempt an Ilika valuation here. As I said above, I believe that the valuation largely depends at this point on whether one believes it can commercialise its battery technology at scale profitably. I assess that to be rather a specialist question for those with a deep understanding of solid-state battery technology.

Almost quintupling over the past year, Ilika shares are hot property in the market and it seems that a lot of growth investors believe that the battery development means the shares will sustain upwards momentum. This is a second coming for the company – today’s share price is still a little below where it was in 2014, for example, so a lot of the drivers seem to be based on sentiment and expectations, not results. As I have shown above, there is little commercial revenue and significant dilution. I also see no prospect of a dividend for many years. I see Ilika as primarily a speculative play at this point, so am staying away from it.