The four main British banks are looking like interesting investments at present. Dividend yields are excellent and as a result of the problems 12 years ago all of them are well capitalized. There’s no risk – OK, no risk unless civilization itself is going down the tubes – of their going bust.

So, strong capitalization, high dividends, sure there’s a certain economic problem to be faced at present but why not buy into such an income stream at such agreeable prices?

The answer as to why not being that hoary old bugbear, politics. The European Central Bank has decided that European banks, which face rather greater problems, should not be allowed to pay dividends at present. OK. But this creates political pressure for the same practice to be forced upon the British banks. I don’t think they need it but as an avid observer of – and sometimes participant in – British politics I don’t think this pressure will be resisted.

I expect – without 100% certainty you understand – British bank dividends to be cancelled. Even to the possible extent of the non-payment of those already announced.

The domestic – retail if you prefer – British banks had a torrid time of it in the last crisis. Lloyds (OTC:LLDTF) took over Halifax, that one action taking it near to bankruptcy without government intervention. Royal Bank of Scotland (OTC:RBSPF) was pretty much bust without the government intervention. Barclays (OTC:OTCPK:BCLYF) survived through new capital from Qatar, the court cases over which only finished a couple of weeks ago. HSBC (OTC:OTCPK:HBCYF) missed much of the excitement given its substantial Far East business.

As a result of the bailouts they were told to boost their capital reserves. Which they have done and they are, for all of them, well above the levels that the usual stress tests tell us they should be. The thing about financial markets being that they rarely make the same mistake twice. Or, at least, not in the same generation. The British banks are well capitalized.

But of course coronavirus

Even then we’re aware that the economy is under rather a lot of stress at present. So, we’d be worried about the liquidity of the banks perhaps, even as we aren’t worried about their solvency.

However, they all do have that solid capital base these days. The regulation of them really has changed their position this disaster as opposed to last.

So, we might expect them to maintain their dividends, given that we expect this to be a short-term problem?

Those dividends are looking pretty juicy after all: 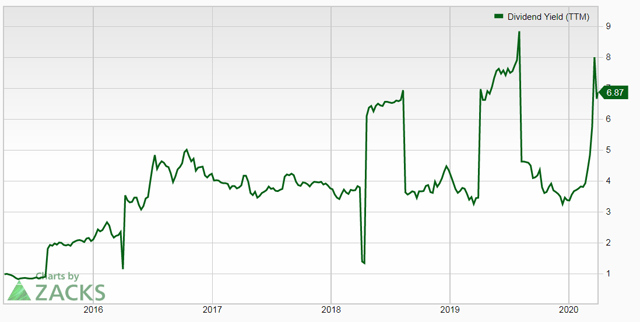 So, happy days, right? Great dividend yields on companies that we know governments aren’t going to allow to go bust. Judging by their actions last time around at least. And which have good solid capital bases this time around as well. Why not load up on them?

At which point we get politics. The ECB has told European banks – the ECB is the regulatory authority for them – not to pay dividends. They are in a rather more fragile state than the UK banks, with a worse likely economic future ahead of them. So, fair enough.

The thing being this then places pressure on British politics to do the same thing. No matter that the British banks are stuffed with enough capital to ride through the likely coming troubles.

There are growing calls for banks to scrap plans to pay out billions of pounds to shareholders so that they can keep the money in their coffers to help customers as times get harder. This weekend Agustín Carstens, head of the Bank for International Settlements, called for a global freeze on dividends in the sector. On Friday the European Central Bank ordered eurozone lenders to cancel all dividends until at least October.

This places a strong moral obligation on banks to make themselves as secure as possible through this crisis. That means ensuring funds are used to support lending and not to reward shareholders, many of whom are similarly more interested in the long-term survivability of the companies than a short-term payment. Banks must cancel dividends and share buybacks.

That’s the Financial Times editorial there.

Britain’s high street banks are set to be forced to halt dividend and bonus payments this week because of the coronavirus crisis.

A decision by the ECB on Friday to stop dividend payments and buybacks by European banks though has put pressure on UK regulator the Prudential Regulation Authority (PRA) to follow suit, with some reports suggesting a decision this week and possibly today.

I’ve worked in British politics, write often enough for the British papers. And that’s the sort of uniformity of view you tend to see when the decision is already made, the pass already sold. And it’s also the sort of political pressure that’s likely to lead to the decision being made even if it hasn’t been already.

Whether or not the British banks need to cut or stop their dividends isn’t really the point any more. The political head of steam is up and I think they’ll be told they have to.

The counterargument is that they don’t need to so therefore they won’t be told they have to. That could even be true but that’s not the way I’d read British politics.

We might well see the British banks as being good buys at the present time. After all, as I’ve said, they are well capitalized these days and also rather well run. I certainly expect this recession to be short, however sharp it is.

But the thing we shouldn’t be doing is buying into these stocks for the sake of the current dividends. I expect – not with 100% certainty but expect still – the banks to be told to cease paying dividends, possibly even those already announced.

If that happens then I expect there to be bargains immediately following such an announcement but consider the risk right now to be too high to recommend a buy.