Hygo Energy Transition (HYGO) has filed to raise $450 million in an IPO of its common stock, according to an F-1 registration statement.

The firm builds and operates liquified natural gas [LNG] infrastructure in Brazil and other regions.

HYGO has a promising future as Brazil’s market deregulates and the use of LNG increases worldwide, but the IPO is very highly priced, so I’ll watch it from the sidelines.

Hamilton, Bermuda-based Hygo was founded to provide integrated downstream LNG facilities in Brazil, with an eye to expanding beyond that country throughout Latin America, Southeast Asia, the Indian Subcontinent, West Africa and Europe.

Management is headed by Chief Executive Officer Mr. Eduardo Antonello, who has been with the firm since May 2016 and provides services via his employment with Magni Bermuda. He was previously Senior Vice President of Seadrill where he established the firm’s operations in Brazil.

Below is a brief overview video of the LNG value chain:

The company’s primary offerings include:

The firm is currently under development on 10.6 GW of natural gas-fired power plants in Brazil.

It is currently evaluating or developing over fifteen terminals elsewhere in Brazil, Ivory Coast, Mexico and Vietnam where it believes its ‘hub and spoke’ approach will provide efficiencies compared to other infrastructures.HYGO is also focused on utilizing floating storage regasification units [FSRUs], which take far less time to permit and construct as well as require less capital.

Administrative expenses as a percentage of total revenue have risen as revenues have decreased, as the figures below indicate:

The Administrative efficiency rate, defined as how many dollars of additional new revenue are generated by each dollar of Administrative spend, dropped to a negative (0.1x) in the most recent reporting period, as shown in the table below:

According to a 2019 market research report by S&P Global, the Brazilian LNG import market is ‘now the fastest liberalizing sector of the country’s so-called new gas market, with private imports of the super-cooled fuel already set to begin ramping up by early next year.’

Before the implementation of market reforms, Petrobras had a monopoly on the midstream gas transportation market. The state is expected to relinquish its ownership in the midstream markets by December 2021, leaving room for private firms such as Hygo to perform these services.

According to management and the Shell 2020 Outlook Report, global LNG trade ‘has seen double-digit growth over the last three years, with LNG demand forecasted to grow at 4% annually from 2019 to 2040….The commissioning of record amounts of LNG liquefaction capacity in 2018 enabled LNG trading to grow by 10%…The use of natural gas in transportation is expected to more than quadruple from 2018 to 2050 according to the EIA’s 2019 outlook.’

Also, the firm believes that the strong demand pull will necessitate continued capital investment to build infrastructure capable of processing and transporting LNG products and FSRUs represent a faster and more capital efficient means to do so.

Major competitive or other industry participants include:

Hygo’s recent financial results can be summarized as follows:

Below are relevant financial results derived from the firm’s registration statement:

Hygo intends to raise $450 million in gross proceeds from an IPO of its common stock, selling 23.1 million shares at $19.50 per share.

Assuming a successful IPO, the company’s enterprise value at IPO would approximate $2.8 billion, excluding the effects of underwriter over-allotment options.

Excluding effects of underwriter options and private placement shares or restricted stock, if any, the float to outstanding shares ratio will be approximately 18.77%.

Management says it will use the net proceeds from the IPO as follows:

We intend to use the net proceeds to fund [i] $80.0 million of capital expenditures related to the Barcarena Terminal and acquiring all remaining outstanding equity interests in the Barcarena Terminal (which would give Hygo a 100% indirect equity interest in both CELBA and CELBA 2), [ii] $40.0 million of capital expenditures related to the Santa Catarina Terminal and [iii] $180.0 million to be paid to Stonepeak in redemption of the preference shares in the Recapitalization, which amount includes accrued and unpaid dividends of approximately $41.5 million. We intend to use the remaining net proceeds of $120.9 million for working capital and general corporate purposes.

Management’s presentation of the company roadshow is not available.

Hygo is seeking public investment to fuel its expansion plans within Brazil, Ivory Coast, Mexico and Vietnam, as well as its targeted areas for new development.

The firm’s financials show contracting topline revenue but a swing to operating profit and increasing cash flow from operations.

The market opportunity for the firm’s hub and spoke approach appears significant. I especially favor its capital and time efficient FSRU focus, as long as these conditions continue.

As to valuation, management is seeking a significant valuation based on its future growth opportunities.

Below is a five-year LNG price chart, which show significant price fluctuation over that time period: 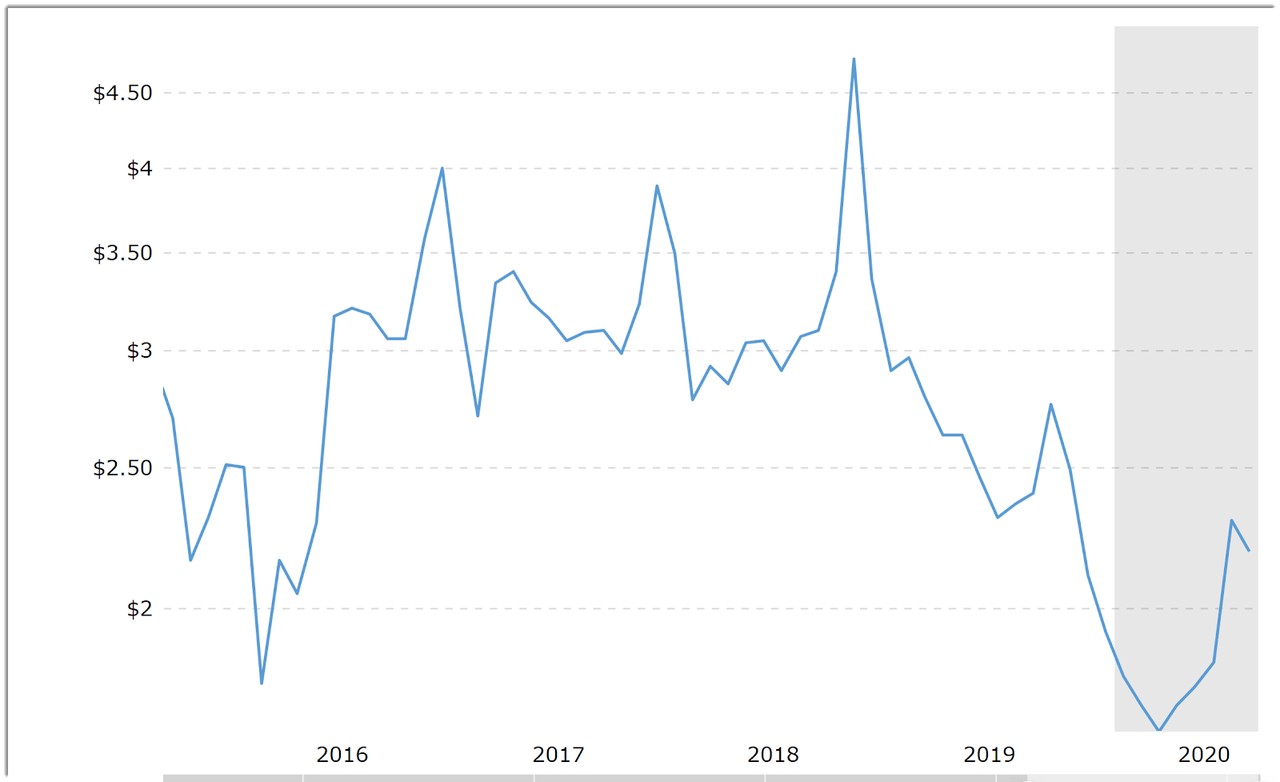 The firm is subject to the volatility of LNG pricing, but perhaps less so than E&P firms.

Management believes it can compete effectively against higher cost fuels with lower cost LNG through its network of terminals and related infrastructure.

Investors interested in the firm’s potential may be able to find a justification for the high EV/Revenue multiple of nearly 64x.

I’m more cautious on paying such a high price for future execution, so I’ll sit on the sidelines for the IPO.

Members of IPO Edge get the latest IPO research, news, and industry analysis. Get started with a free trial!