Husky Energy: While The Common Dividend Is At Risk, I’m Raking In 12% With The Preferred Shares (OTCMKTS:HUSKF)

Husky Energy (OTCPK:HUSKF) is currently paying a very handsome dividend of C$0.50 per year, giving the common shares a current dividend yield of 12.5% as Husky’s share price has cratered due to COVID-19 related issues on both the financial markets as well as the impact of the virus in the oil and gas sector. While the common dividend may be at risk, the preferred shares offer an attractive option to fall back on.

Husky Energy has its main listing in Canada where it’s trading on the Toronto Stock Exchange with HSE as its ticker symbol. The current market capitalization (at C$3.98) is almost exactly C$4B, and the average daily volume is north of 4M shares.

Husky Energy: Vertically-integrated and a cash flow monster in 2019

Husky Energy is a large producer of oil with an average production rate of 290,000 barrels of oil-equivalent per day, ending the year with a strong second semester with an attributable oil-equivalent production north of 300,000 boe/day, peaking at 311,000 boe/day in the final quarter of the year. Approximately one-fifth of the production came from offshore assets which also had the highest netback results per barrel. 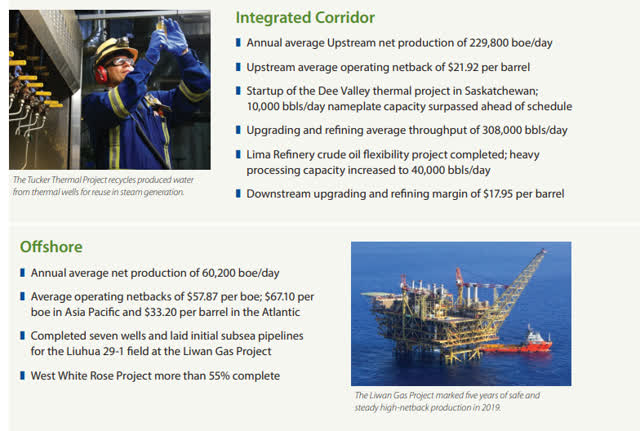 The company generated total revenue of almost exactly C$20B in FY 2019 (adjusted for royalty payments but including marketing fees) which resulted in an EBIT of a negative C$2B. The main reason for this were the higher production expenses (not a surprise given the higher production rate), but the C$5.5B depreciation and impairment charge. Looking at the footnotes, this appears to have been caused by a C$2.24B impairment charge in the upstream division and a C$90M charge in the downstream division, indicating a total of C$2.32B in expenses were non-cash impairment charges and that’s what pushed the pre-tax income into the red territory. 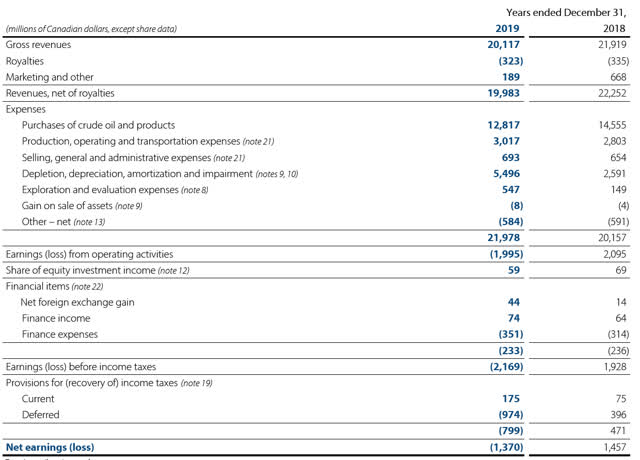 Thanks to a deferred tax income, the net loss remained limited to C$1.37B or C$1.40 per share.

That’s indeed not satisfying at all, but given the fact the non-cash expenses (depreciation, amortization and impairment charges) were the main culprit for the net loss, the cash flows should look much stronger.

And indeed, Husky reported an operating cash flow of C$2.97B which includes a C$280M investment in the working capital position but excludes C$233M in lease payments and C$177M in capitalized interest expenses. On an adjusted basis, the operating cash flow came in at C$2.84B. 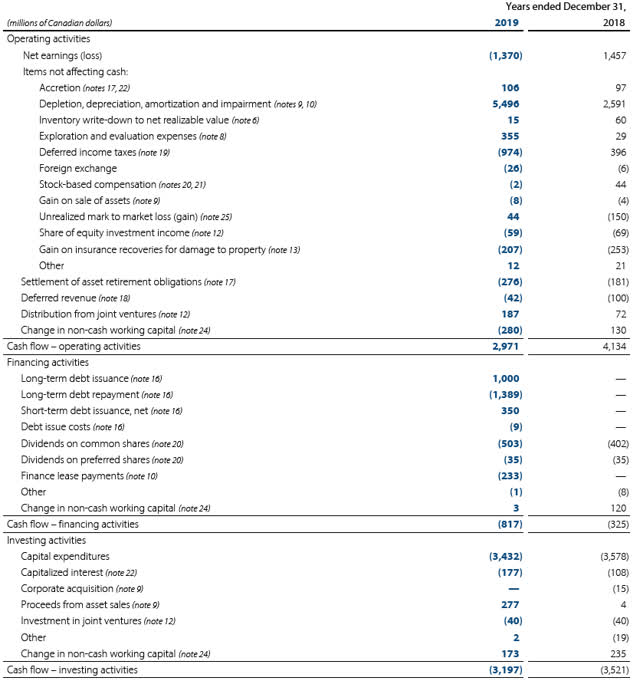 This wasn’t sufficient to cover the C$3.4B in capex, but as I will explain in the next section of this article, that C$3.4B in capex includes quite a bit of growth investments as the sustaining capex level is less than C$2B per year. So on a sustaining basis, Husky would have been free cash flow positive to the tune of C$840M which was more than sufficient to cover the C$540M in dividends on both the common and preferred shares.

COVID-19 will leave its marks in 2020, and Husky is scaling back its operations – is suspending the dividend the next step?

Husky was heavily investing in the new White Rose offshore project which will be a cornerstone asset in Husky’s plan to reduce its cash flow breakeven (sustaining capex + dividends) price per barrel of oil which it wants to see reduced to less than US$30/barrel (on a WTI basis) by 2023: 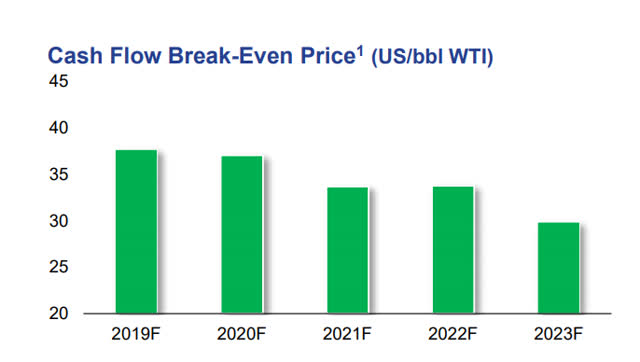 The White Rose project was 57% complete as of the end of February, and Husky had budgeted to spend roughly half a billion dollar on the offshore oil project, located 350 kilometers from Newfoundland but has now suspended the construction activities while waiting for the financial situation to improve (the official reason of the suspension was the COVID-19 virus and the health and safety of the employees, but cutting in excess of C$500M in capex from the 2020 commitments is an added bonus). The West White Rose suspension comes on the heels of the suspension of the construction activities at the Superior refinery which was being rebuilt (partly funded with insurance proceeds) after a fire.

This comes on the back of an already reduced capex program. In March, Husky Energy decided to cut C$900M from its capex program and identified C$100M in cost savings to reduce its 2020 cash outflow by a combined C$1B. The total capex guidance was cut from C$3.2-3.4B to C$2.3-2.5B with only a minimal impact on the oil production which is expected to decrease by 5-7% to 275-300,000 boe/day. Hardly a negative factor as the demand for oil products decreased anyway and the refineries have been adjusted to maximize the output of the most sought after products.

READ ALSO  Japan plans to boost tourism — but only domestically

Considering the sustaining capex is estimated to be less than C$2B, Husky could probably reduce its annualized spending even more, toward the C$2B level. 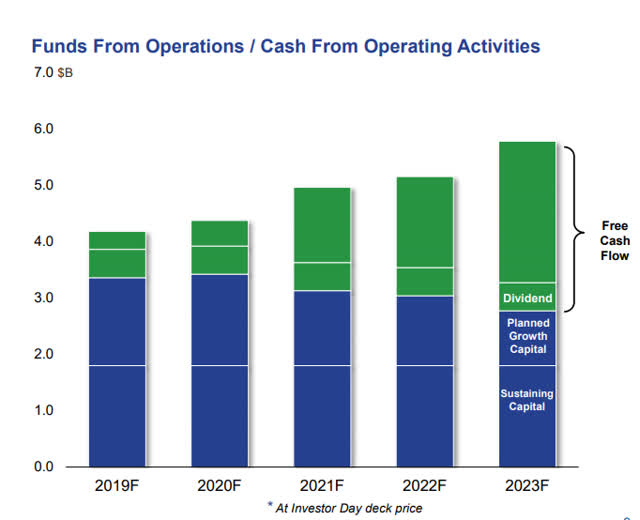 Surprisingly, Husky Energy hasn’t provided an update on its dividend yet. The current quarterly dividend of C$0.125 per share is costing the company approximately half a billion Canadian dollars per year and would be an easy cash outflow element to cut to further reduce the cash outflow. It looks like Husky Energy has been kicking the dividend reduction/suspension plans down the road while waiting and hoping for higher oil prices, but it’s not unthinkable a dividend reduction will be announced when Husky reports its Q1 results at the end of this month.

I bought the Series 7 of the preferred shares

So although Husky Energy already has taken steps to reduce its cash outflow by C$1B, the company will very likely still be cash flow negative at the current oil price (although we shouldn’t forget the financial performance in the first two months of the year will be relatively normal). As such, the common share dividend is at risk so I have no reason to invest in the common shares (although a potential dividend cut or suspension may already be anticipated by now).

Husky Energy has four types of preferred shares that are currently trading on the Toronto Stock Exchange as well. After careful consideration, I decided to initiate a long position in the Preferred shares G, also called the Series 7-shares

The Series 7 preferred share has a slightly higher yield than others, even if you would take the upcoming 5-yearly reset in to account. Let’s have a look at the terms:

Great. But what will be more important is the new interest rate that will be locked in, in June 2020, for the subsequent five-year period. That rate is actually relatively easy to calculate as it simply is the five-year government bond rate of Canada + 3.52% as mark-up.

The current 5Y bond yield is approximately 0.45% so if the bond rate remains unchanged until June, we can look forward to a yield of 0.45% + 3.52% = 3.97%. On a face value of C$25 per preferred share, this represents a new annual preferred dividend payment of C$0.9925, divided in four quarterly payments of C$0.248125/share. As I bought my preferred shares at C$8.21, an annual dividend income of C$0.9925 represents a yield of 12.09%. That’s obviously based on today’s 5Y government bond yield which can still change (for the better or worse) by the time the new yield gets locked-in during June.

I have a long position in the Preferred Share Series 7 (trading as HSE.PR.G in Canada) and I’m planning to add on additional weakness. Even if the 5Y government bond yield drops to 0%, the yield on a C$8.21 purchase base would still be around 10.7%.

Disclosure: I am/we are long HUSKF PREFERRED SHARE SERIES 7. I wrote this article myself, and it expresses my own opinions. I am not receiving compensation for it (other than from Seeking Alpha). I have no business relationship with any company whose stock is mentioned in this article.

Additional disclosure: I have no position in Husky Energy’s common shares but have purchased the preferred shares.