John Hancock Tax-Advantaged Dividend Income Fund (HTD) is a hybrid fund of equities and preferred stocks. More specifically, the equity portion is comprised primarily of utility names, while the preferred portion is chock full of financial institutions. This makes the portfolio rather unique in that it can’t be compared easily with the other utility/infrastructure funds like Reaves Utility Income Fund (UTG) or Cohen & Steers Infrastructure Fund Inc. (UTF). Which, of those two funds there are enough differences as well to warrant holding both. This distinction though has probably caught some investors in HTD off guard. Due to HTD’s steep discount of 8.05% and long-term track record, I’d still be a buyer today.

HTD is held in our Taxable Income Portfolio at the CEF/ETF Income Laboratory. The fund has an investment objective to provide “a high level of after-tax total return from dividend income and capital appreciation.” They emphasize income with “typically investing at least 80% of assets in dividend-paying securities.” They also put an emphasis on the utility sector; however, they also carry quite a bit of exposure to financials via preferred stock. Preferred stock is another attractive option for income-focused investors. This isn’t out of the ordinary either, as financials primarily make up the largest offering of preferred stock.

The fund is currently managing $1.17 billion in assets. The fund does utilize leverage, this is currently 35.81% of the fund’s assets. HTD has an inception date of February 27th, 2004. The fund charges a reasonable 1.18% for expense ratios, and when including leverage expenses this sits at 2.62%.

It really is no surprise that HTD has had a struggle throughout 2020 just like any other investment in this COVID-19 environment. However, if we are to look at the fund’s performance relative to “suspected” peers, we will see that HTD has lagged significantly. As previously mentioned, I believe this has to do primarily with the fund’s exposure to preferred stock in the financial space. The other funds are more heavily geared towards equities. UTF that does hold some small amount of preferred and bonds exposure isn’t as much as HTD’s ~40%.

Preferred stock is generally more defensive in nature due to its “pull to par” attributes. However, in a sell-off they can be sold off unusually hard as volumes are just generally lighter overall, causing issues with liquidities. This is the same exact concept that all investors are aware of – during sell-offs assets drop precipitously as investors flock out the exits, where there is a lack of buyers to offset those pressures. 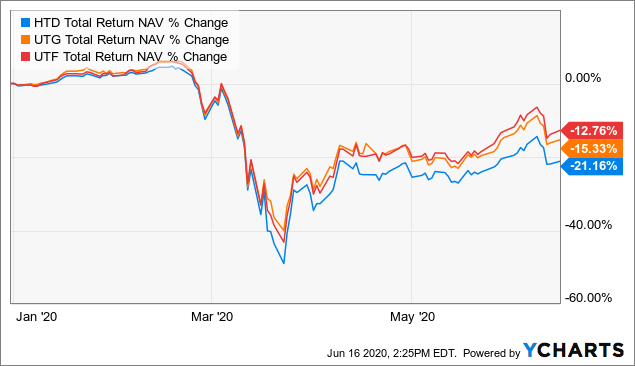 This lag can be seen when looking at each of the funds’ performances on a YTD total return NAV basis.

With that being said, John Hancock provides their own blended benchmark that might be more appropriate for HTD. It is a blend of “55% ICE Bank of America Merrill Lynch Preferred Stock DRD Eligible Index and 45% S&P 500 Utilities Index.” I believe this is a more appropriate representation of the portfolios mix.

While that underperformance is discouraging, I haven’t given up hope in the fund. A large reason for such underperform is cropping up in a lot of CEFS. This is to be expected in massive sell-offs with leveraged funds. This is the major downside to investments utilizing leverage – the very real risk of steeper drawdowns. Then, when performance is tracked against a non-leveraged benchmark during a sell-off – the performance is distorted from those recent sharp losses.

HTD is the prime example too. If we look at a time when things were going up steadily higher, like 2019, we see a different picture. Let’s take a look at the performance from the funds Annual Report ended October 31st, 2019. 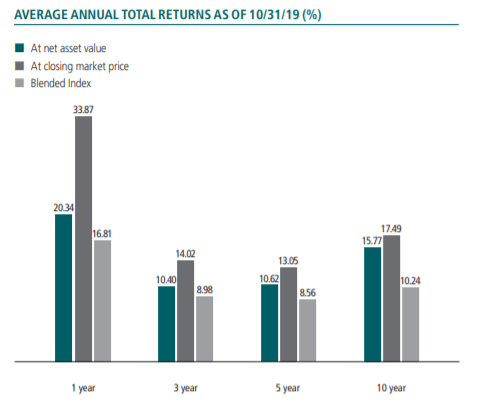 Here we see a very different story – this time frame shows that HTD beating their benchmark on all timeframes!

I’m also a proponent that the market is generally rising in nature. Partially why I’m a fan of CEFs in the first place, due to their wide diversity that they can give to specific sectors or asset classes. I’m not trying to pick a single winner tomorrow – I’m trying to pick what will throw off attractive income over the next 10-year period.

I still believe HTD fits this description and would be a buyer as I have been for the last several years. The current discount of 8.05% is just the kicker here. Especially considering the fund’s 5-year average discount is 5.80%. Signaling that the fund is relatively attractive even over the longer-term. Though this too might be a bit distorted as the fund for the last few years really shrank its discount. 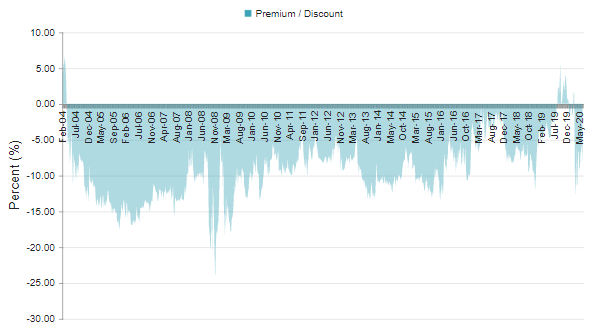 Due to the fund’s significant discount, the fund has a NAV distribution rate of 8.03%. For investors though, we get paid 8.74% for buying today. This works out to $0.138 paid out monthly. If we continue a rebound or even stay flat from here, then I believe this is manageable by the fund. However, should we revisit lows then a trim could be waiting for us investors. I’m fine with trims if they are necessary for the longer-term stability of the fund. I know that is quite obvious; however, with the nature of the current environment, no investor can really make for certain a call one way or another. Even looking at the fund’s 57% NII coverage from that last report isn’t very useful, due to the fact that many dividends will be cut and have been this year.

Some have shown concern as the fund has been estimating return of capital in its distribution. It is particularly interesting as the fund estimates that for the latest distribution they estimate 48% as ROC – but on a fiscal YTD basis – they don’t show any as ROC.

I’m not entirely sure why they are breaking it down and then changing their estimation so drastically. Check this one out from January 31st, 2020 where they showed 66% of that distribution was ROC. Then, they also stated that 20% was ROC. Now, all of a sudden, their latest section 19a said 0% ROC for their fiscal YTD. I don’t believe this is cause for concern though since it is just estimated and they just keep adjusting that estimate. Primarily, I wouldn’t be surprised if they do utilize ROC this year if the fund doesn’t recover to flat. This can be advantageous for tax mitigation. It could also simply mean they are selling off their “losers” to harvest losses. This could provide cash for new positions that could be potential “winners” as well.

As of the last two years, the fund hasn’t contributed any portion of their distribution as ROC either. Note that 2018 was a down year for the fund as well.

One thing that I can say for certain is that I am a bigger fan of HTD right now than its counterpart – John Hancock Premium Dividend Fund (PDT). I would be selling that fund right now to purchase HTD if I hadn’t already done so last year. That fund is sitting at a 7.69% premium and a NAV distribution of 9.38%. That isn’t to say that PDT can’t be just as successful over the long-term, just that it will have a harder time maintaining that rate if we don’t see more of a continuing recovery quickly.

Another area that has held HTD back, but isn’t specific to the fund, is the energy sector. The fund currently holds almost 10% in the energy space. We all know how that sector has done this year. Briefly, the price of oil had turned negative before rebounding significantly. Still, the energy sector has been hindered this year and that is a source of many dividend cuts and bankruptcies. 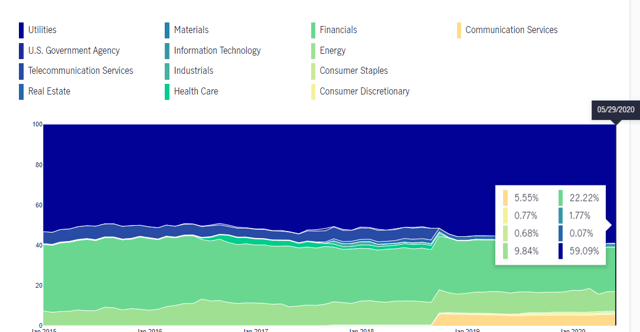 This is also where we see that 22.22% of the fund was last reported as being in the financial sector. To drill deeper into the holdings, we can take a look at the fund’s total holding list. There we see that the fund has 117 holdings. That is including some various options – though that isn’t a huge focus for the fund. They also list their interest rate swaps as a holding as well. Taking all of that away, the fund is left with 102 total holdings. However, what is important is we get the classification of either common stock or preferred stock for all of their holdings.

When looking at the funds top ten, it is also easy to spot as the preferred stock has a maturity and coupon rate. Though some of that information is missing as well if you don’t look into their full holdings list. For example, Interstate Power and Light Company is a preferred stock holding. 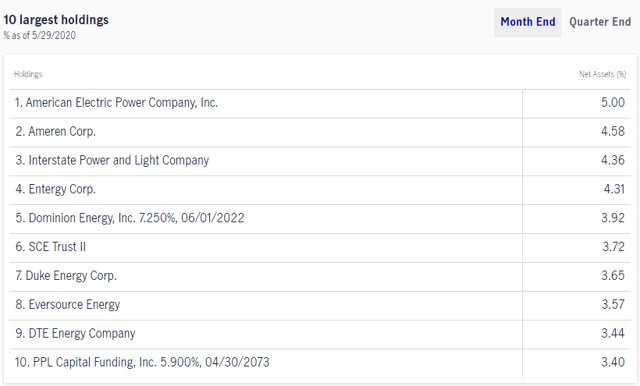 The top ten positions make up just shy of 40% of HTD’s portfolio. A positive so far is that none of the 6 equity top holdings have cut their dividends so far. This is exactly what utilities are known for too, providing reliable dividends and cash flow to investors. That also shows that there should be some optimism in the fund remaining relatively stable as far as what the fund can provide for NII coverage. Thus, that should translate into the reduced chance of a distribution cut.

READ ALSO  Why Selectively Shorting Tanker Names Paid Off In 2020 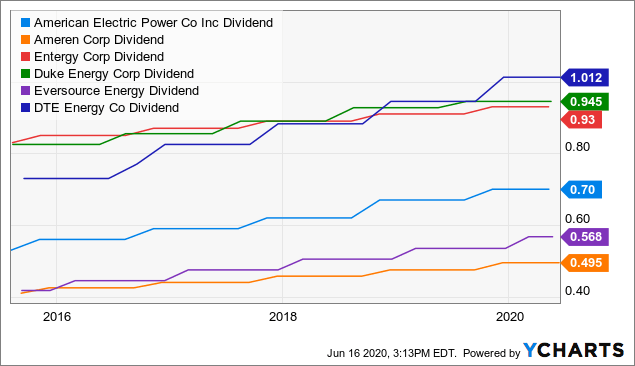 A primary draw to HTD is the fact that the fund holds a significant amount of preferred stock and utilities. In a normal period of time, these provide steady cash flows to investors. Though as discussed, it has created some volatility with the preferred holdings. Typically, we do see the utility sector as a source of stability and defensive in nature during sell-offs. With this particular one, we have seen tech as primarily the safety play. That is quite unusual. One reason for this is that utilities have been overvalued for quite some time. Especially heading into the pandemic. Additionally, the expectation for fewer electric and natural gas energy needs as businesses shut down was a factor.

HTD has been a long-term winner. The performance of the fund for 2020 has been disappointing and lackluster. However, I believe that has a lot to do with the fund’s financial and energy exposure. Additionally, it has to do with the fund’s utilization of leverage. Leverage can be great for enhancing returns over the longer-term, over the short-term though, we can see some large drawdowns during panics. During these shorter-term moves, the drawdown can push down performance numbers significantly. As we saw, the fund just last year reported beating its benchmark in every period. Now, as of the end of April, the fund only beat performance on a 10-year annualized period.

I’m still a buyer here, with the funds 8.05% discount and 8.74% distribution. I believe there are brighter days ahead for the fund. Of course, if you believe the economy will continue to tank, and the pandemic continues to worsen, then I would be avoiding purchasing anything in this environment. I’m personally a bit more optimistic that we will survive the current difficulties presented! Although, the question is how long that recovery could take. I certainly don’t regret picking up the shares I did in April.

Disclosure: I am/we are long HTD, UTG, UTF. I wrote this article myself, and it expresses my own opinions. I am not receiving compensation for it (other than from Seeking Alpha). I have no business relationship with any company whose stock is mentioned in this article.

Additional disclosure: This article was originally published on June 16th, 2020 to members of the CEF/ETF Income Laboratory.