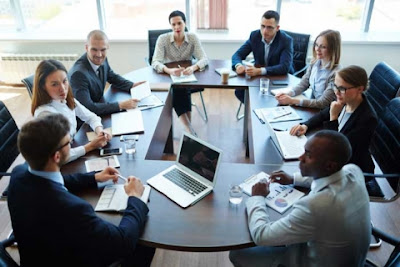 By An Anonymous Middle Manager in a Big Company

I’m a senior technical manager at one of the largest financial institutions in America.  That means I’m a middle manager on the technology side with one or two clear responsibilities.  That means the executives at the corporation may know who I am, but usually only when something goes very wrong (and occasionally when it goes very well.)  In general, non technical executives are the norm at non technical firms.  In fact, it appears to me that being a “leader” in this world requires you to be completely ignorant of how technology works.  But I digress.  I want to share my story of how one corporation is handling the George Floyd situation and its aftermath.  I think it’s instructive and might help anyone who faces these situations in the future, especially if you hold controversial opinions.

Our company started having “open conversations” about the Floyd Protests early last week.  In these “conversations”, an executive would take the lead, repeating all the one-sided talking points about police brutality targeting black Americans, followed by what the anonymous UC Berkeley professor would call, univariate analysis that all of these events are due to systematic racism.  So the open conversation generally starts like this:

“Thanks for coming, everyone.  I’m very nervous to be in front of you, because as a white person (they are always white), <insert statement about guilt here>.  But I see the recent news events and I am deeply disturbed,  <Recount each of the police killings of blacks in the news over the past 2-3 years.>  It’s important that we take a stand and let people know this company won’t tolerate this any longer.  <Insert boilerplate about how that’s why such and such has launched such and such initiative.>  There is still racism and racial injustice in our country and silence is no longer accepted. Now I’d like to invite you to be a part of our conversation to promote change.”

What happens next is the executive will then call on his or her direct reports to come forward one by one and talk about how they feel.  It’s really important to understand that the message is always how does this make you feel, and not what does this make you think.  They don’t want you to think.  When the underling speaks, it’s much the same boilerplate nonsense you have already heard, mixed with some nervously told anecdote about how they witnessed some racist thing once.

After that, an open floor.  Some idiot in the audience always has to say something.  So two or three of the biggest suck ups or most politically oriented (read: biggest idiot) will chime in, passionately (always very passionately), to brag to you about how they once saw racism too.  Cool story, bro.

Then the conversation moves on.  The next day, the underlings host their meetings, where the same thing happens.  We all hear the same nonsense again.  This time a new set of managers is called upon to speak before their serfs.  Once again, everyone is assured that we all care very much. And then another rung lower the next day. We finally get to the middle manager basement (i.e. IT). It finally came my time to speak.  I followed 2 or 3 fellow middle managers in technology who rambled on about how pissed off they were.  Cool stories, bro.

You must understand if you are in this position, that you are not in an open conversation. You are in a very dangerous conversation for which anything you say can be used against you down the road, and the possibility of getting fired in today’s climate for saying the most seemingly innocuous thing is very real.  So when it came to me I made a very very short one sentence statement saying the world would be a better place if we treated each other better.   The awkward silence after I spoke was a little amusing, but my boss thanked me and moved on.  Nothing I said could ever be used against me.

What follows these conversations is truly bizarre and the epitome of progressive arrogance: Reflection Time

Following these conversations we are asked to reflect on the current events and what more we can do. I’m not joking. Our executives send out calendar invites to us for 30 minute reflection time after these meetings.  In the middle of the work day….  You can see that executives do not actually have any work to do, I guess.  This level of stupidity I cannot partake in, so I decline the invites without sending a reply.  Think of the gall here?  Like we are all children who don’t take the time to reflect on injustice on our own, so our corporate executives (all of whom live in wealthy, isolated communities) are going to hold our hands and make us reflect….  This makes my blood boil a little bit.  If you have lived on this planet long enough, you have witnessed injustice.  If you think you can solve the problems of injustice, great go for it.  Yea, have at it bro.  But just because the rest of us are not rushing to join you, it doesn’t mean we are blind to it or we don’t reflect on it.   Maybe we’ve seen enough of it and thought hard enough on it, that we know you are a complete idiot who won’t solve anything and will likely make matters worse.

Speaking of brilliant plans to solve racial injustice, what is my company doing to make a difference (besides handing out millions to shady organizations to fight “inequality” and “racism”)?  I can no longer call access control lists by their technical nomenclature of black/white lists.  They will be block/safe lists.  Racism solved!  Great, let’s all pat each other on the backs and get back to work, please.

Here’s the key takeaway from all of this. And if you are a like minded individual, and you would like to keep both your job and your sanity, what you need to keep in mind is that all of these things happening at your firm are for one reason.

Your company is having these meetings and putting out these boilerplate memos, for two main groups of people:

1. Customers who might take their business elsewhere (small concern)

2. Employees who might become disgruntled and take to social media complaining that your company is racist (big concern)

In order to continue making money, your company needs to engage in this stupidity for a little while.  And then we will get back to normal, I think… well I hope….  In the meantime, try to not take it personal.  It’s not.  It’s just stupid being stupid.