Home Financial news How the Unemployment Fiasco in Europe Is Kept out of Official Unemployment Rates
2020-11-132020-11-13By finanz.dk

The massive and once-again extended Pandemic-era furlough programs serve their purpose, but…

In Europe, people who are furloughed are paid under government programs via their employers. Many of these programs have been created during the Pandemic. In theory, these people still have jobs. In practice, they’re not working, or are working heavily reduced hours. But they do not count as “unemployed” and are not reflected in the “unemployment” numbers. So throughout the Pandemic, the official unemployment rates barely ticked up, compared to the last crisis, and remain low for the EU era, despite tens of millions of people who’d stopped working due to the lockdowns (chart via Eurostat): 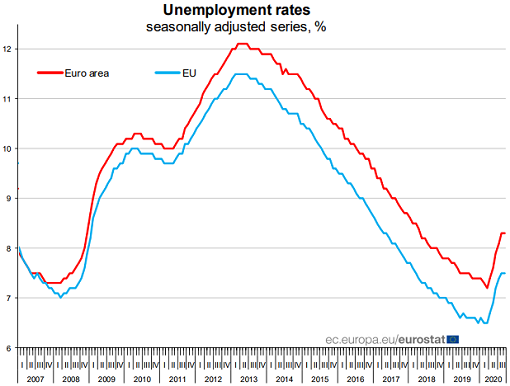 The UK adopted a sweeping job retention program at the beginning of its last lockdown. Each government pays companies, who in turn pay employees between 60% and 84% of their monthly wage. In some cases, the workers work fewer hours for less pay; in others, they don’t work at all. The workers take a hit to their income but their jobs remain intact, at least for the duration of the program.

Under the UK program, businesses can claim 80% of a staff member’s regular monthly salary, up to a maximum of £2,500. The money must be passed on to the employee and can also be topped up by the employer.

But the unemployment rate has begun to rise as people come off furlough, and those whose jobs disappeared entered official unemployment. The unemployment rate ticked up to 4.8% in the three months to September, from 4.5% in Q2 and from 3.9% a year earlier, according to the Office for National Statistics (ONS). In London, the unemployment rate surged by 1.2 percentage points from the previous quarter, to 6%. It was the largest quarterly increase in unemployment since the ONS started tracking the data in 1992.

Extend and pretend. Most of Europe’s job programs were initially described as a short-term fix, providing employers affected by the lockdowns time and financial breathing space to reinvent themselves for the new economic reality that is quickly taking shape. But more and more governments extended the duration of their programs, some until 2022, in the hope that the economic outlook will change in the interim.

One country that said it wouldn’t do this was the UK. But it, too, backtracked. The furlough program was supposed to come to an end on October 31. But four days later, just after announcing a fresh lockdown, the government extended the program until March 31, 2021. It also announced a fresh round of measures to support the self-employed. On the same day, the Bank of England pledged an additional £150 billion of QE purchases, which will help ensure there is enough demand for all the new debt the government will need to issue to finance its new commitments.

In March, the number of furloughed employees exploded from zero to 8.5 million and remained near 9 million through May, after which it began to drop as the economy opened up. By the end of August, the latest available data, they’d fallen to 3.3 million: 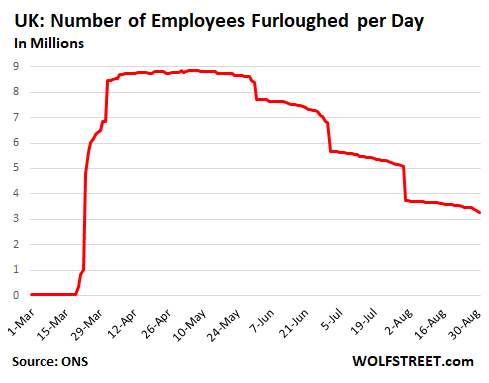 This decline in the number of furloughed workers — some of whom then become “unemployed” — led to the irony that in the UK, as elsewhere, the official unemployment rate rose precisely when the job market was improving. Millions of people whose jobs had been put on hold during the lockdown were able to go back to those jobs once the lockdown was lifted. But many others ended up having no jobs to go back to, either because their employer had gone out of business in the interim or had decided to let them go.

Some companies announced mass layoffs in anticipation of the end of the furlough program. The problem is not just that jobs are disappearing in large numbers; it’s that very few new ones are being created.

Other countries too showed a surge in the official unemployment rate in the third quarter, driven by people who came off furlough programs with no job to go back to, even as the job market improved.

In France, at the height of the lockdown in April, the number of salaried workers registered for the “temporary unemployment” program exploded to 8.8 million. By September, it dropped to 1.6 million. Most of the people who left the program returned to their jobs. But not everyone.

And the jobless rate jumped to 9.0% in Q3 (from 7.1% in Q2), according to the INSEE statistics office. The increase of 628,000 unemployed people was the single biggest quarterly jump on record going back to 1975, said INSEE. 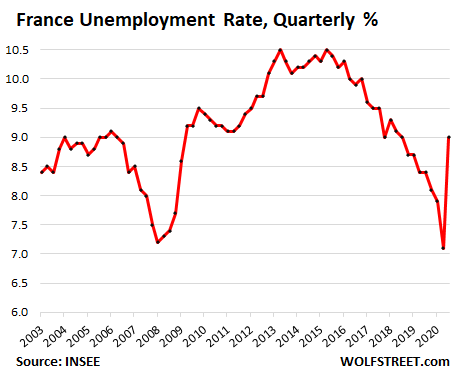 Now that France has entered another lockdown, the government expects the number of people on its temporary unemployment program to rise to around 2-2.5 million in November — roughly double the number in September but substantially less than during the first lockdown.

Much will depend on how long the lockdown lasts, how much damage it does to consumption in the lead up to Christmas, and whether or not the legions of small and medium-sized companies that already took on a huge amount of fresh debt to survive the last lockdown can weather another storm of economic inactivity.

In Spain, the number of salaried workers on the government’s temporary unemployment program has fallen dramatically in the last eight months, from about 4 million in April to just under 1 million today. But the unemployment rate — which is already very high — has risen, reaching 16.3% in the third quarter. Two-thirds of the 697,000 people who were added to the official unemployment rolls between July and September were in the tourism sector, which in Spain accounts for roughly one out of every eight jobs. 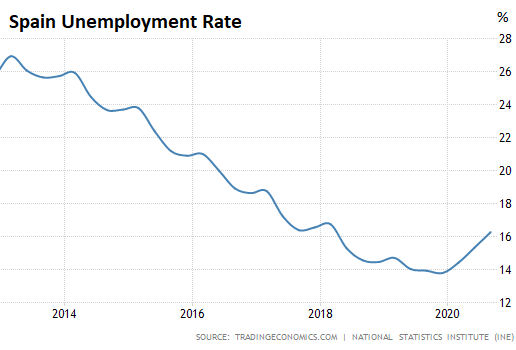 In Germany, unemployment rate in September was roughly flat with July, at 4.5%, after ten months of increases to the highest level since December 2015 (chart via Trading Economics): 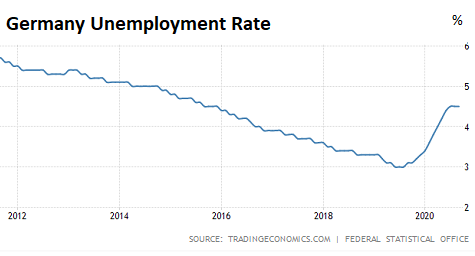 At the peak in May, there were 7.3 million people on Germany’s “Kurzarbeit” furlough and social insurance program. More than a third of them were in manufacturing jobs. None of them counted in the official unemployment numbers. By October, the number of people on Kurzarbeit declined to 3.3 million. 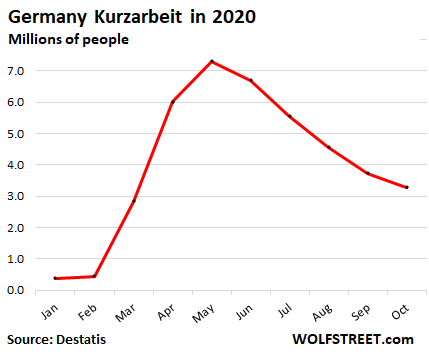 But with a new lockdown in Germany — this time a “Lockdown Light,” as it’s called — in place, the number of workers on Kurzarbeit is likely to swell again.

Italy had the largest number of people on furlough (12.6 million) during the last lockdown. But the unemployment rate in September was just 9.6% — exactly the same as it had been in September 2019. When the government introduced its furlough program in March, it effectively banned companies from laying off workers. So all the people who stopped working because of the Pandemic, and were paid by the government under the furlough program, were in the furlough data (the 12.6 million), and not in the unemployment data.

And the steep drop of the unemployment rate in March and April during the lockdown was caused not by a sudden burst in hiring, but by the very lockdown conditions during which people stopped looking for work and therefore no longer counted as unemployed (chart via Trading Economics): 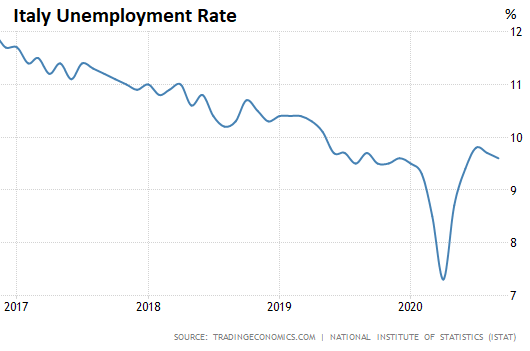 Despite the ban on layoffs in Italy, around half a million jobs have disappeared. Many companies are barely holding on. Italy also has one of the biggest informal economies in Europe, and many of those who depend on it have lost their livelihoods. They qualify for little, if any, government support. Even many of those in the formal economy who lost their jobs in the first lockdown had to wait months before receiving their furlough checks, while the unpaid bills and debts kept growing. Many of those who haven’t lost their jobs yet fear they could at any moment. By Nick Corbishley, for WOLF STREET.