How Paul Krugman Can Be Useful 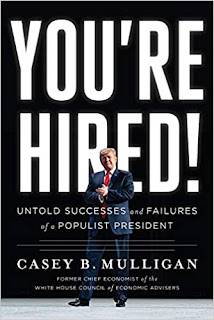 Casey Mulligan served as chief economist for the Council of Economic Advisers in the Trump Administration from September 6, 2018 to August 2019.

He now has a book out on the experience, You’re Hired!: Untold Successes and Failures of a Populist President.

He writes about Paul Krugman in his memoir:

Paul Krugman’s Twitter is a another social media that I followed as Chief economist. He is wrong about most economic subjects… Professor Krugman’s Twitter proved helpful for predicting mistakes that would be made by the President’s’ opponents.

He had this to say about the China-hating, trade-hating Trump adviser Peter Navarro:

Even the President was annoyed with Mr Navarro’s boorishness and double dealing and barred him from running meetings. .. Mr Navarro also flunked marketing in 2018 when he was promoting a “fair and reciprocal tariff act.” So named, the “FART act” had no chance of passing.

From the book’s blurb:

Donald J. Trump had essentially zero experience running for office and his candidacy for President of the United States was opposed by many in both parties that dominate American politics. Nevertheless, in 2016 the American people told him “You’re hired!”. As an insider, scholar, and Chief Economist of the President’s Council of Economic Advisers, Casey Mulligan presents riveting first-hand accounts of President Trump’s engagement with policy and politics. The struggle between Trump and a ruling class is skillfully presented by revealing business practices that President Trump is using to dismantle and reshape the Federal administrative state. It proves that today’s populism has some real substance, but also acknowledges Trump’s political incorrectness. You’re Hired! brilliantly details the administration’s successes and failures alongside the scandals, and accurately portrays the approach and capabilities of our President and our government. You will feel like an insider as you learn how Trump handles auto companies, Senator Bernie Sanders, immigration, international aid, the 2016 election, Twitter, and more that the news media has often failed to report or explain. Rigorous evidence is detailed on assertions that the White House staff is in perpetual chaos which is directly attributable to the President. A fascinating comparison of the similarities and differences between Presidents Reagan and Trump is presented along with topics including Obamacare, Putin, the opioid epidemic, and tariffs. This book highlights the great divides created by the President and his “Make America Great Again” (MAGA) supporters being on one side and a small, unelected, and insulated class who have years of experience running, and reporting on the Federal government being on the other side. Anyone wanting to understand, emulate, or oppose President Trump’s “populist” methods will be enthralled by accurate first-hand accounts of how he engages with policy and politics.