How Much Oil Does The U.S. Really Own?

It’s no secret that the United States produces more crude oil on a daily basis than any other country at 12.6 million bpd, according to the most recent weekly EIA data. But this is domestically. When you look at crude production from US majors operating overseas, just how much of the world’s crude oil do these US giants really control?

Who Produces the Oil?

It may be impossible to get a definitive total, but a look at the reported production from US oil majors against some of the rest of the world’s largest oil companies shows that two of the world’s 10 largest crude oil producing companies are US-based. 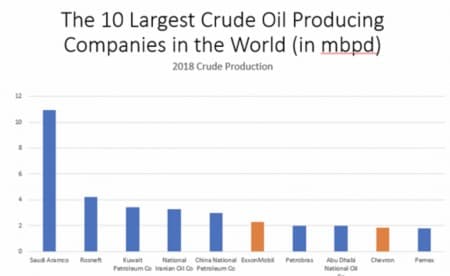 The top 10 oil producers together contribute 34.73 million bpd to the world’s oil supplies, and the two largest US oil majors, ExxonMobil and Chevron, account for 4.13 million bpd of that, or 11 percent.

Compared to total global oil production, which was estimated at 94.7 million bpd, the United States’ top 2 oil producers account for 4.4 percent, based on production. That may not seem like a large figure by itself, but only Aramco—which is responsible for 100 percent of Saudi Arabia’s production, produces more oil than Exxon and Chevron combined.

Aside from Exxon and Chevron, other major US oil companies include ConocoPhillips, Occidental, EOG Resources, Anadarko, Marathon, Vaalco, and Devon Energy. And these players operate in countries throughout the globe. 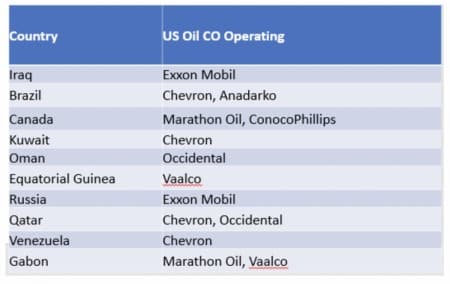 And the list above is by no means all inclusive, with US oil majors also operating in Trinidad, the United Kingdom, and China.

In total, US oil companies produce more than 15 percent of the world’s oil.

Who Owns the Oil?

Another way to look at who controls the oil is to look at the proved reserves of the US majors, which accounts for not just their oil reserves held in the United States, but around the globe. 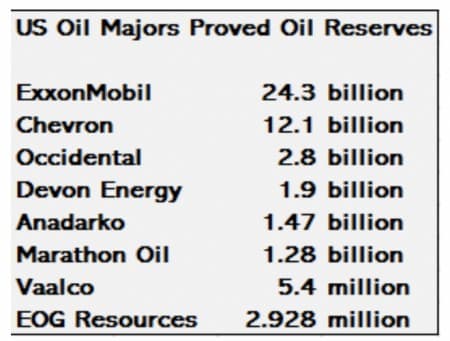 That list is not all-inclusive either, but it is some of the biggest names in the US oil industry. Combined, these players hold roughly 44 billion boe. Of course, there are many more smaller US companies that hold additional proven barrels.

So how does that stack up?

Even with Exxon’s massive size, US production and proved reserves is a small portion of the world’s oil, which stands at 1.73 trillion barrels of oil. This is less than 3 percent of the world’s total proven oil resources. Related: Oil Production Paralyzed As Venezuela’s Electricity Crisis Worsens

But that doesn’t mean that US oil companies don’t hold sway.

American oil companies’ presence in the Middle East goes back decades. In 1943, America and Britain were jockeying for pieces of the Middle Eastern oil pie. At that time, the British controlled more than 2/3rds of oil production in the Middle East, and only 14 percent fell under American control.

Arguments can be made, however, that any US majors operating in the Middle East have little influence over oil produced in the Middle East, and some countries have shoved US majors to the backburner as they nationalized their lucrative oil industries.

America’s oil majors have had a difficult time in other regions of the world as well, leaving many to question how much influence these oil majors really have, should push come to shove.

One need only to look as far as Venezuela, Libya, and Nigeria to see how Western oil companies have sometimes fared overseas. But the oil prize often has so much appeal that even great risks are sometimes just too good to pass up.

In Venezuela, for instance, former Socialist leader Hugo Chavez nationalized almost all of its oil, seizing assets and kicking foreign oil companies out, at great expense to those oil firms, proving that not even Venezuela, holding the world’s largest oil reserves, was worth it.

Other countries such as Libya and Nigeria have been embroiled in so much internal strife and corruption that some US oil companies have pulled out.

Undeterred, some US majors are keen to go exploring in other countries, and the most interesting spot today for this exploration seems to be Guyana and its neighbor, Suriname. And already concerns have been voiced that Exxon in particular got a crazy good deal in Guyana, with some calling Exxon’s deal exploitative.

And like the Middle East when petroleum was first discovered, Guyana and Suriname have zero experience with petroleum, and their policies for oil have not yet been established—prime ground for US majors.

If history is any indication of this will go, the oil majors bold enough to dip their toe into those literal waters could one day find themselves kicked to the curb after developing the oil and gas resources, but we’d bet good money they have planned for such a contingency.

With US majors controlling as much as 15 percent of the total oil produced globally, US producers have a powerful position in the world. And with the United States accounting for 98 percent of the world’s total production growth in 2018, and the trend likely to continue, its influence will only solidify in the coming years.