How do financial markets react to monetary policy signals?

How to map policy communications onto financial market effects

Mapping central bank communication onto yield curve movements is challenging: it is difficult to isolate the component of market participants’ expectations that is exclusively driven by policy actions. The European Central Bank (ECB) has a unique way of communicating its monetary policy decisions – first announcing the policy decision in a press release and then then explaining the policy decision further in a press conference. This offers a natural way of separating the financial market effects of the change in policy rates from the effects associated with other policy actions and communication, by employing intraday data. Past research, going back to Kuttner (2001) and Gürkaynak et al. (2005) for the United States and Brand et al. (2010) for the euro area, has focused on identifying the effect of monetary policy surprises on asset prices. In a nutshell, these studies collect data at different times on the same day, i.e. before and after a monetary policy decision, to isolate the effect of monetary policy.

The implicit assumption in many of the existing papers is that a policy meeting is perceived to convey a single policy message, for example about immediate policy rate changes, and that this is a constant feature of policy meetings through time. This implies that there has been little emphasis so far on the presence of multiple policy messages and their effects over the various maturities of the yield curve. Similarly, there has been little emphasis on the combination composition of policy instruments, and on the fact that the number and type of messages may change over time due to the introduction of new policy instruments.

In a recent paper Altavilla et al. (2019) make use of the newly constructed Euro Area Monetary Policy Event-Study Database (EA-MPD), to ask how many dimensions of policy action and communication market participants perceive in press releases and press conferences following Governing Council policy meetings. We show how to interpret policy surprises through the lens of the footprint they leave on the yield curve. The results dovetail with the general understanding of how the ECB policy communication is designed to operate.

High-frequency data, i.e. data collected at different times on the same day, are an essential input for studying the effects of monetary policy communication. Recent studies for the euro area analysing the effect of policy surprises on a limited number of asset prices include Andrade and Ferroni (2018), Cieslak and Schrimpf (2018), and Jarociński and Karadi (2020). These studies all required an enormous investment in preliminary data to identify the effect of policy surprises.

Using high-frequency intraday data, we measure changes in asset prices over three time windows: the press release window, the press conference window, and the window of both together, called the monetary event window.[2] The EA-MPD reports the asset price/yield changes we measure for the three event windows in separate worksheets.[3]

To provide an illustration of the intraday data, Chart 1 shows the two-year Overnight Index Swap (OIS) rate on four different monetary policy meeting dates – 4 July 2013, 4 September 2014, 3 December 2015 and 7 September 2017. We select the two-year rate as this maturity is sufficient for the rate to display movements in response to announcements of non-standard as well as standard monetary policy measures. The EA-MPD reports changes around the two vertical lines, denoting the times of the press release and the press conference. Chart 1 makes it clear why these two windows should be separated. 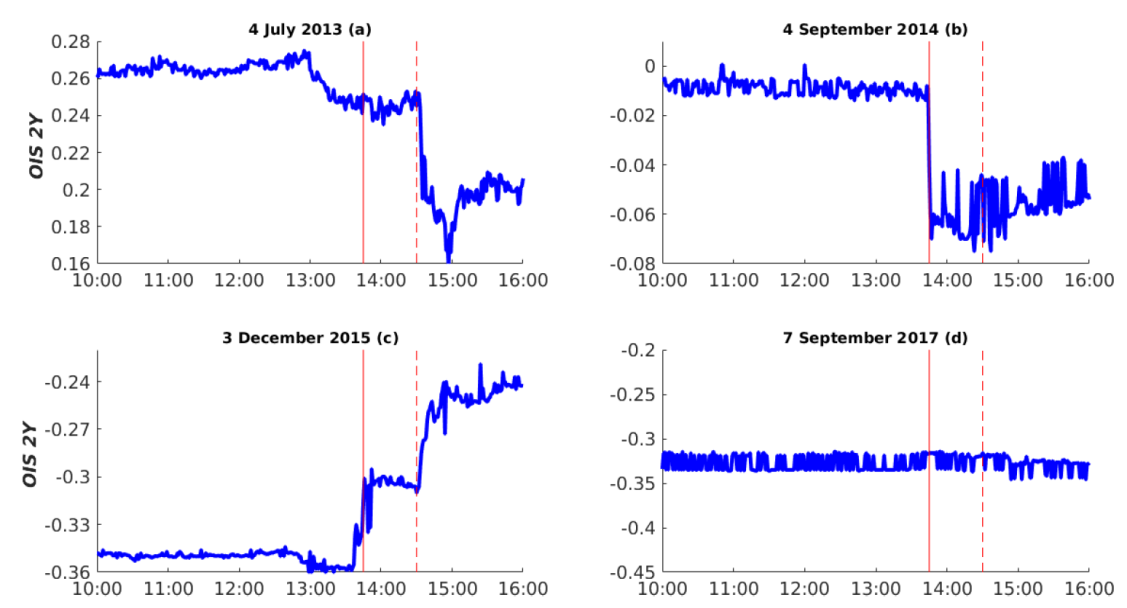 The four panels in the chart are illustrative of the different situations in which monetary policy surprises may arise during the policy meeting day.

Panel (a) shows no reaction of the two-year OIS rate during the press release window but a reaction in the conference window. This episode corresponds to the first time ever that the ECB announced at its press conference formal forward guidance on the future path of its policy rates, by stating that policy rates were expected to remain at present or lower levels for an extended period of time.

Panel (c) depicts a policy date on which there are sizeable movements in both windows. This episode captures the financial markets’ disappointment following the ECB decision to increase the size of its quantitative easing (QE) programme and decrease the interest rate on the deposit facility. This was a clear deviation from survey expectations among financial analysts gathered ahead of the policy meeting. Markets were expecting a larger cut in the policy rate (accordingly the yields moved up during the press release window) as well as a larger increase in QE (the related disappointment reinforced the upward movement in yields during the press conference window).

The study by Altavilla, Brugnolini, Gürkaynak, Motto and Ragusa (2019) makes use of the newly constructed EA-MPD, explained in the previous section, to investigate how financial markets react to policy actions and communications in the press release and press conference following ECB Governing Council policy meetings. It uses the sample running from January 2002 to September 2018. The EA-MPD is kept up-to-date and now includes monetary policy surprises up to June 2020.

In order to characterise the yield curve reaction to different policy announcements Altavilla, et al. (2019) employ a factor analysis. Factor analysis is a statistical technique that aims at reducing the information contained in a large number of variables into a limited set of underlying variables that are called factors. These factors are extracted so as to maximise the common variance from all variables. In our case, for example, we first collect the reaction of yields on the risk-free curve at various maturities to each official policy communication and then extract a few factors to characterise the typical response of these yields to policy events that share similarities.

Once estimated, we propose a structural identification of these factors and we find surprises that resemble policy rate change, forward guidance and QE policies. We find that in the period January 2002 to September 2018 market participants perceived the press release to contain a single piece of information (mainly related to policy rate changes). However the press conference was not unidimensional – there was never only one “communication” factor. Market participants always extracted two dimensions of information from the press conference and a third was added after the advent of QE. To understand what these factors were, and ultimately give an economic interpretation, we use the methods developed by Gürkaynak et al. (2005) and Swanson (2017).

Chart 2 shows that the estimated footprint that monetary policy measures leave on the yield curve varies across the two event windows. The press release window features a factor related to the surprise in the immediate setting of the policy rate, affecting short rates heavily and having little effect on long-term interest rates. We label it “target”, as this factor is similar to the behaviour of the target factor in the United States identified by Gürkaynak et al. 2005. In the press conference window, we find two statistically significant factors that have always been present, and the QE factor which became statistically significant after the announcement of the QE policy in January 2015.

The two factors that have always been present, even before forward guidance became an explicit ECB monetary policy tool, can be understood as both being forward guidance surprises, but with different flavours. It turns out that financial markets have always perceived a short-term and a longer-term forward guidance factor. We call the first factor, which has its peak effect around the six-month maturity and has little effect on long-term interest rates, “timing”. This is to differentiate it from the second factor, now commonly called “forward guidance”, which has a peak effect at two years and significantly affects long-term interest rates. For the QE factor, by contrast, the longer the maturity, the larger the effect. This is consistent with QE implementation in the euro area, where the average maturity of the securities bought has been about eight years.

We therefore find that there have always been multiple “communications”, even before explicit forward guidance and QE became part of the ECB toolkit. This raises the question: did the way asset prices respond to change after forward guidance became an explicit policy tool? Our work suggests that market responses to a given communication surprise have been fairly stable. That is, a forward guidance surprise has over time elicited more or less the same financial market response in different sub-samples – in terms of risk-free rates, sovereign yields, exchange rates – but there have been relatively more forward guidance surprises since the onset of the Global Financial Crisis.

The footprint of monetary policy actions on the yield curve 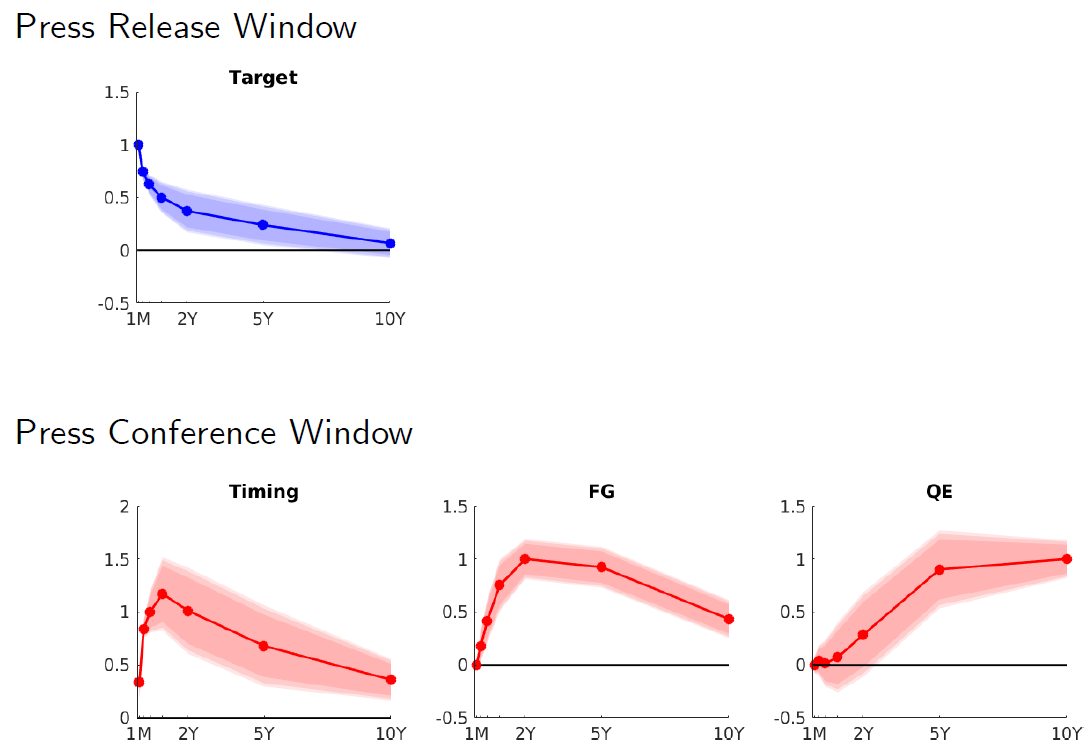 Using the methodology on other, unofficial central bank communications

As shown in Altavilla et al. (2019) the methodology summarised in the previous sections is flexible enough to be easily generalised to the analysis of any policy communication, including policy speeches and market news. Financial markets react to many kinds of news about monetary policy and we can parse them according to the same dimensions we have identified for the Governing Council’s communication.

Two events illustrate the point. The first is a speech given by Mario Draghi on 27 June 2017, at the ECB Forum on Central Banking in Sintra, entitled “Accompanying the economic recovery”. The second is a Bloomberg news article by Jana Randow, Alessandro Speciale and Jeff Black that was released on 4 October 2016 and hinted at a decision on tapering by the ECB.

Given the estimated effect of each factor for the different surprises we now have in hand, we can ask which combination of factors best explains the observed market reaction.  The answer is shown in Chart 3, where the magnitudes of the effects are shown as fractions of the average absolute value of each type of surprise. This makes each factor reading comparable to other readings of the same factor (but magnitudes cannot be made comparable across factors).

This proof of concept exercise shows that any policy-relevant news can be broken down into policy surprise factors once the initial factor extraction exercise is carried out. For example, we can now say that the Draghi speech was seen as a very large QE event – its size is twice the in-sample average for such surprises.

Note: The figures show the estimated factor decomposition into the timing, forward guidance and QE factors of the two monetary policy events not included in our sample. In each subplot the first bar is for the June 2017 Draghi speech and the second one is for the October 2016 Bloomberg news article.

The two-stage nature of ECB policy news dissemination turns out to be helpful in identifying the market response to monetary policy announcements. Rather than assuming the presence of predefined surprises in different windows, we estimated and identified these, finding a multi-faceted information structure in the press conference window.

We find that in our sample (from January 2002 to September 2018) the target surprises are dominant in the announcement window, but that in the press conference window this factor does not even exist. In fact, in the press conference window news about the future path of policy was the main driver of yield changes until QE was introduced, with QE then adding a new factor.

Importantly, we estimate and identify the footprint that different monetary policy announcements leave on the yield curve. While changes in the policy interest rate mostly influence the short maturities of the curve, the impact of forward guidance policies reaches its peak at intermediate maturities. Quantitative easing measures, by contrast, exert their maximum impact at long maturities.

We also showed how to use the policy surprise factors we identified to analyse any policy communication, such as speeches or market news, and demonstrated that the EA-MPD is a useful resource for studying future rounds of monetary policy measures and assessing the relative effectiveness of the policies announced.[4]

Gürkaynak, R., Sack, B., and Swanson, E. (2005), “Do actions speak louder than words? The response of asset prices to monetary policy actions and statements”, International Journal of Central Banking, No 1, pp. 55-93.