How Covid-19 sparked a dividend drought for investors

James Murray is upset. The retired engineer from Edinburgh enjoys a fixed pension, but supplements it with a steady stream of dividend payments from BP. The oil company’s decision this summer to cut its dividend has forced Mr Murray into a personal austerity regime.

The 79-year-old longstanding BP shareholder notes that he has seen many financial fluctuations over the course of his life. Yet BP’s decision to halve its dividend payment to 5.25 cents a share — the first cut since the disastrous Deepwater Horizon oil spill in 2010 — was a blow.

“Dividends are quite important to me,” Mr Murray says. “My problem is that companies cut dividends not because they couldn’t pay them but because of political correctness in the current climate. That is troubling. It has real consequences.”

Companies across the world have been forced to cut or suspend their dividend payments to conserve cash in the wake of the Covid-19 crisis. Globally, dividends — a vital source of income for pension funds, charities and foundations — fell by over a fifth to $382.2bn in the second quarter of 2020, according to Janus Henderson. The $108bn fall is the biggest since the investment group began its global dividend index in 2009. Corporate share repurchases have slid even more precipitously — nearly halving in the US in the second quarter.

Financial markets have bounced back from the effects of the pandemic, thanks largely to the aggressive efforts of central banks to soften the economic damage. A tentative economic recovery has allowed some businesses to restore dividends. Yet many are still reeling from the impact, after stumbling into the crisis in poor shape.

Companies have over the past three decades become increasingly “shareholder friendly”, returning more and more of their earnings to investors in the form of dividends and stock buybacks. Many have even loaded up on debt to do so, leading to a secular erosion of their creditworthiness.

That is now coming home to roost, with many companies forced to abruptly curtail payouts to conserve cash and strengthen their balance sheets. Meanwhile, governments and central banks have unveiled measures unprecedented in size and scope to prevent bankruptcies and redundancies from exacerbating the impact of Covid-19. But such taxpayer largesse clashes with the tradition for corporate payouts to investors.

Some analysts believe this could bring the era of shareholder friendliness to an abrupt end, as governments exact a price for their support in the form of higher taxes and encouragement for more generous wages. Many banks have already been forced by regulators to curtail their payouts, but this could become a broader trend, as investors also begin to reward healthier companies with higher stock prices.

“There is obviously a focus on resiliency now, and the financial safety net has in practice been extended to the private sector. The real risk is that government support doesn’t come for free,” says Luca Paolini, chief strategist at Pictet Asset Management.

While many investors will lose out as a result, this is unlikely to change the shift back towards more labour-friendly corporate policies, Mr Paolini says. “They might complain, but will people march to defend BP’s dividend? I don’t think so,” he adds.

Ever since a 1970s stint teaching in Paris, Edward Altman — emeritus finance professor at New York University’s business school — has casually but regularly asked corporate treasurers and financial officers he meets for their ideal credit rating.

Back then, the answer was invariably in the A range. Some executives lusted for a pristine, top-notch triple A rating, while others were content with a double A or A grade that still indicates a solid, dependable borrower. However, these days the answer Prof Altman usually receives is that a lowly triple B — the lowest possible rating to still be considered “investment grade” — is perfectly acceptable.

The root causes are the tax breaks that debt payments enjoy in most countries; a global decline in interest rates since the 1980s and a resulting “hunt for yield” among bond investors that made them more indifferent to credit ratings. Rising pressures on executives to increase shareholder payouts in the form of buybacks and dividends has also played a part.

The result has been a secular shift towards “efficient” corporate balance sheets, a code for more tax-advantaged debt than pricey equity. This financial engineering in practice increased returns, enriching bosses and shareholders, but at a cost to creditworthiness. “If you can’t grow through more productivity, the way to increase earnings per share is to add more leverage,” Prof Altman says.

This is particularly noticeable among listed companies with more disparate, shorter-term shareholders. Credit Suisse has found that listed but family or founder-controlled companies are on average considerably less indebted, yet have historically generated stronger revenue and profit growth — and greater stock market returns.

However, some economists argue that the greater use of debt encouraged companies to be leaner and meaner. This is a theory encapsulated by a saying attributed to a 1988 paper by Bennett Stewart and David Glassman: “Equity is soft, debt hard. Equity is forgiving, debt insistent. Equity is a pillow, debt a sword.”

The 2008 financial crisis and the resulting rise in company failures sparked a debate on the topic. But most of the regulatory focus was on banks, which were forced to hold much more equity as a result. Meanwhile, central banks lowered interest rates to record lows, encouraging companies to gorge on more debt, sometimes purely to return to shareholders.

As a consequence, many businesses this year ambled into a once-a-century economic shock with fragile balance sheets. It was left to central banks and governments to unveil rescue measures to buttress the corporate sector and prevent a cataclysmic spate of big bankruptcies.

Continuing to pay out dividends and conducting buybacks after receiving such state help is tricky. Already in March the Bank of England ordered UK banks and insurers to suspend dividends and buybacks. In June, the Federal Reserve told US banks that buybacks would be temporarily forbidden, and barred them from increasing dividend payouts in the third quarter. In July, the European Central Bank extended its “recommendation” for eurozone banks to halt payouts until the end of the year.

Many investors criticised the heavy-handed moves. “Cancelling the dividend was virtue signalling by the Bank of England, it’s false symbolism,” says one large investor in Lloyds. “Most of our money is for retirees, so if they think they are hurting Wall Street fat cats, they’re dead wrong.”

Regulators, although aware of how many people depend on dividends, feel the severity of the crisis trumps that concern.

“I’m very sorry for the pension funds, but I’m also very sorry for millions of other people,” Francesco Mazzaferro, head of the secretariat of the European Systemic Risk Board, said at a conference this summer. “It’s extremely difficult to find a solution to accommodate all needs. We need to be talking about the distribution of losses, not dividends.”

In the longer term, some economists and analysts expect resilient balance sheets — with less debt and fortified by greater cash reserves — to become more popular than efficient ones, with Covid-19 brutally highlighting the dangers of excessive debt burdens.

Investors are already beginning to reward conservatively-managed companies with higher stock prices. Goldman Sachs’ index of S&P 500 companies with “strong” balance sheets has climbed 24 per cent this year, dramatically outpacing the broader stock market. In contrast, those classified as having weaker, more indebted balance sheets are still down 11 per cent.

Buybacks are the most vulnerable to cutbacks, given that they are generally used more opportunistically and can be easily dialled up and down, while dividends are often considered by investors nearly inviolate, says Kristina Hooper, chief strategist at Invesco, one of the world’s biggest fund managers.

Stock repurchases have been a particularly popular way of returning money to shareholders in the US, given that it flatters a company’s earnings per share — which is often an input into calculating management bonuses — and because dividends are taxed. Yet excluding technology companies, the value of US buybacks is now lower than share issuance by the widest margin in at least 16 years, according to Bernstein, a research house.

This has upended one of the biggest stock market trends of the past decade. The stocks of companies with big buyback programmes returned nearly 550 per cent between 2000 and the end of 2019, according to Goldman Sachs, thumping the 120 per cent gain of the US equity market over the same period. But in 2020 they have lagged behind, and are still nursing an 11 per cent loss for the year.

Investors are convinced that the payout austerity will also hit dividends. Janus Henderson expects that even in its best-case scenario dividends globally will shrink 17 per cent from last year’s record haul to $1.18tn in 2020, with only US dividends relatively resilient. However, highlighting how investors are girding for leaner times, the S&P Dividend Aristocrats index — which tracks companies that have maintained or increased dividends for at least 20 consecutive years — remains down 10 per cent in 2020.

Research from Schroders indicates that dividend bear markets can last much longer than the economic downturns that cause them, and points out that dividend futures contracts are pricing in UK, US and European dividends remaining below the 2019 mark for many years to come.

Most income-oriented investors accept that payouts are likely to fall. “The culture of dividends is a very important part of investment for savers. But the priority for companies is in ensuring they are a going concern,” says Richard Colwell, head of UK equities at Columbia Threadneedle, the asset manager. “Dividends are a part of capital allocation but that should not be at the expense of starving a company of important investment.”

It is still unclear whether this will prove a durable shift, or merely a short-term blip caused by the pandemic. As long as debt continues to enjoy a generous tax advantage over equity, many analysts doubt that there will be a wholesale change in how companies fund themselves. Citibank analysts note that while stocks of companies with lower credit ratings have lagged behind this year, they have begun to catch up with the performance of better-rated ones over the summer.

Yet Prof Altman argues that companies will inevitably have to tighten their belts, which will inescapably come at a cost to shareholder returns. The consequence of the pandemic is that companies around the world now have on average even bigger debt burdens than when the crisis began, he adds. “I feel pretty strongly that there’s a debt bubble building, to an alarming level,” he says.

Nonetheless, some investors stress that cutting dividends is not costless, given how many pension funds and individual retirees depend on a steady stream of payouts. This is especially true at a time when bond yields — the mainstay generator of reliable income — are at record lows, and likely to stay there for the foreseeable future.

“Even pension funds at the end of the day are people. Dividends are a way to sustain the population at a time of great stress,” says Daniel Peris, a fund manager at Federated Hermes, a Pittsburgh-based investment manager. “We’re not trying to starve a company of capital. We’re saying, as smaller shareholders, whatever profits are left after the necessary investments and debt should be distributed.” 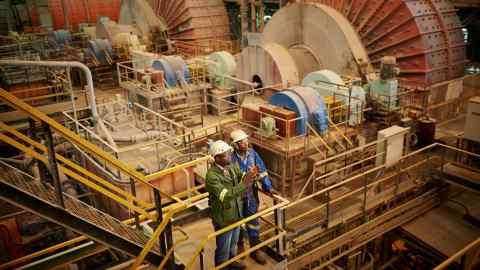 Mr Peris says it is possible that the pandemic leads to a more forceful shift towards “stakeholder capitalism”, at a cost to the returns that shareholders have grown to expect. But he argues that the consequences of such a radically new social contract should not happen haphazardly.

“If it did happen, we [would] need to throw out all the books. The math is not the same,” he says. “This could be a pivot in the nature of capital markets, that just needs to be done in a considered fashion. Without cash distribution, the market becomes a casino.”

Additional reporting by Madison Derbyshire and Stephen Morris in London