There is great news out from Dr. Didier Raoult, Director of l’IHU Méditerranée Infection.
and Professor of Medicine with specialties in infections and microbiology, concerning new results on more patients treated with hydroxychloroquine and azithromycin.

Raoult is the Fench physician and microbiologist who conducted the original study showing the effectiveness of hydroxychloroquine and azithromycin.

Here is the  new abstract: 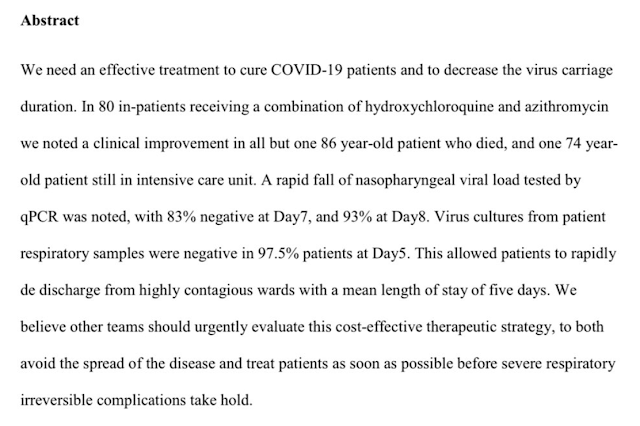 The full paper can be found here.

Previously from The City Journal:

France has a new savior—neither its president nor the savior proclaimed as such by its former religion, but Professor Didier Raoult, an eminent microbiologist who works in Marseille. He strongly, indeed loudly, advocates the use of hydroxychloriquine and azithromycin in the treatment of patients with Covid-19. By implication, at least, President Trump believes, or believed, in him.

The professor looks the part of guru or savior. He has been described as resembling a chieftain from the pages of the Asterix comic strip, or an aging hippie who strums a guitar. His long, dank hair is in the style of a pop singer, circa 1970, and underneath his white clinician’s tunic he dresses with the studied, or provocative, casualness of the soixante-huitard, the type whose life congealed in 1968, after the events of May. But no one should mistake his scientific stature: he has discovered new pathogenic organisms that have been named after him. He is a highly respected and prolific researcher.

This makes his current position all the odder. On the basis of some laboratory evidence and a single poorly controlled study with a small number of subjects and a large number of defects, he has announced to the world that, combined with large-scale diagnostic testing, his drug regime is the solution to the epidemic.

Note the new results based on 80 paitents just came out, after the City Journal piece.