Hong Kong’s chief executive Carrie Lam has resigned from an honorary fellowship at a Cambridge university college after it raised concerns over her commitment to human rights and freedom of expression.

The move comes as the international community puts pressure on Hong Kong and its leaders following the introduction of a controversial national security law, which has raised widespread concerns over political freedoms. The legislation followed months of anti-government protests and has prompted sanctions from the Trump administration.

In a statement on her Facebook page on Saturday evening, Ms Lam accused Wolfson College of “slander” after it expressed concerns over recent unrest in the former British colony.

Wolfson said in its own statement that its governing body had “raised concerns with Mrs Carrie Lam about her commitment to the protection of human rights and the freedom of expression in Hong Kong”.

The college had previously said in early July that it was reconsidering the Hong Kong leader’s honorary fellowship, which she has held since 2017.

Ms Lam claimed in her Facebook post that Wolfson was under pressure from British politicians and the media over the matter. She added that Wolfson’s dean last week wrote to her to express concerns that she had deviated from principles of academic freedom and that she had written back to rebut that claim.

The UK government’s relations with China have deteriorated in recent months after it offered to extend a “pathway to future citizenship” for the millions of Hong Kong residents eligible for British National Overseas passports. In response, China threatened to stop recognising those passports as valid travel documents.

Hong Kong’s national security law, which was imposed in June, has led to Beijing installing its own security offices in the territory for the first time. The sweeping legislation, which bypassed Hong Kong’s legislature, can impose life imprisonment for crimes including colluding with foreign elements. 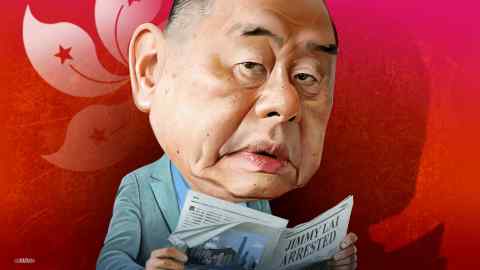 Last week Jimmy Lai, the pro-democracy founder of Apple Daily, a local newspaper, was arrested under the law. Several prominent pro-democracy activists have moved abroad since it was enacted.

Ms Lam has been the personal target of US measures. She was included on a list published earlier this month of 11 mainland and Hong Kong individuals subject to US sanctions.

The measures, which also targeted Luo Huining, Beijing’s top official in Hong Kong, make it difficult for the sanctioned individuals to participate in the international financial system by penalising US banks that do business with them. Last weekend, Ms Lam said she would cancel her US visa.

Hong Kong has become a battleground in rising tensions between Washington and Beijing. They initially focused on trade relations but have escalated dramatically to encompass technology and China’s approach to handling the early stages of the coronavirus pandemic.