In the first part of this two-part analysis of retail sector conditions, I assessed recent trends based on October’s retail sales figures and other consumer metrics, concluding that retail sales have deteriorated significantly, particularly in physical stores, and conditions seem likely to soften further this autumn and winter. In this concluding analysis, I present my holiday outlook tomorrow, including a more specific look at impacts on the retail REITs.

Two trends we can usually count on this time of year: Retailers keep moving forward the start of their holiday sprint ever earlier, and leading retail analysts release their holiday spending outlooks that typically converge within a narrow range. Retailers stayed true to form, pushing “Black Friday” sales into October as they tried to beat the threat of worsening economic and pandemic conditions later in the season.

But there seems to be little consensus among the many holiday shopping outlooks this year. Deloitte illustrates the lack of clarity, presenting two distinct scenarios, neither great: one a downside scenario with growth of only 0% to 1% if consumers remain cautious, and the other a more upbeat scenario of 2.5% to 3.5% growth if wealthier consumers are confident enough to increase their spending. Overall, Deloitte predicts sales growth of only 1.0% to 1.5%, down from 4.1% in 2019, based on a blend of the two scenarios.

On the other hand, Wells Fargo has a much more optimistic outlook, forecasting sales growth of 9.0% on the assumption that consumers will reallocate curtailed services spending to holiday gifts. Meanwhile the National Retail Federation—normally the go-to source for holiday outlooks—has delayed its forecast, saying the effort is like assembling a jigsaw puzzle with many pieces missing. Nonetheless, they see ‘“solid evidence that signals a better-than-expected outcome.”

Count me on the more cautious side of the ledger, particularly for physical retailers. Indeed, we should not be surprised if sales at shopping centers and malls actually decline this holiday season relative to last year. To begin with, the economic context is weak. Almost three times as many people are unemployed now as they were out of work before the pandemic. Millions more workers have dropped out of the labor force entirely or otherwise experienced a sharp decline in income.

And now there are mounting signs of decelerating growth or even reversal. Though businesses continue to add jobs at historic rates (Figure 1), the pace has slowed sharply even though we’ve regained barely half of the 22 million jobs lost in the initial weeks of the pandemic. 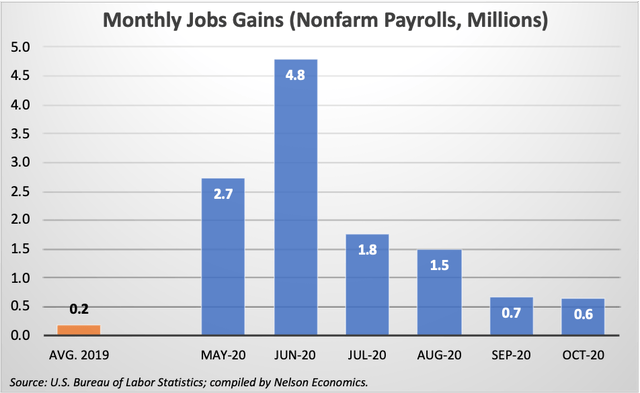 Meanwhile, layoff announcements are multiplying with the expiration of the “payroll protection program” as countless furloughs are now converting into permanent layoffs because their firms still cannot operate normally this summer. Though down from their epic levels this spring, initial claims for unemployment benefits remain at levels that rank among the darkest periods of prior recessions (Figure 2). Claims rose this past week for the first time since mid-September. 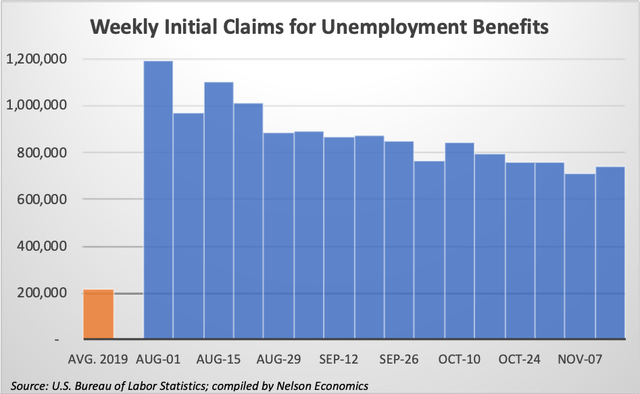 This elevated unemployment and income loss are straining family budgets. Fully one-third of households surveyed by the Census Bureau in late October and early November are finding it “somewhat” to “very” “difficult to paying for usual household expenses” in the past week. These difficulties will only increase this winter as families lose their unemployment benefits” and other income support under the CARES Act. A Morning Consult survey found that 40% of respondents receiving unemployment benefits in September would lose those payments by the end of October, while another 46% would lose the benefits by the end of the year. This “fiscal cliff”, which I discussed at length in my review of 3Q20 GDP, presents a critical downside risk for the retail sector and the economy generally—unless Washington finds the will to remedy the problem with a robust stimulus plan.

On a more positive note is that personal savings spiked this spring and summer. Households have saved much of the pandemic income support that the government has been doling out, providing a cushion against future income declines and potential funds to maintain spending. Nonetheless, this stockpile of savings amounts to a very thin reed on which to base robust holiday spending

Retail Indicators Are Not More Encouraging

However, nonstore sales rose more than 3%, presumably much to the benefit of Amazon, perhaps signaling that the holiday season will not be a total loss for the retail sector. But overall, the signs are not good. The Conference Board reports that consumer confidence—an important predictor of retail sales—dipped in October and remains 30% below levels during the 2019 holiday season.

Moreover, the holiday consumer surveys by Morning Consult and others suggest this will be a challenging season for retailers. Morning Consult found that almost half of consumers expect to spend less this year than last, and only 14% plan to spend more—similar to survey results from Numerator and Accenture—while Deloitte calculates that consumers plan to spend 7% less in total.

Finally, the consumer surveys all agree that even more holiday shopping will be moving online—and these surveys pre-date the latest spike in COVID cases. Many states have enacted restrictions on indoor shopping, and in any case, shoppers generally feel safer shopping online than in person. Indoor malls can expect the sharpest decline in shopper traffic. One telling statistic from the Census Bureau’s household survey: Half of the households surveyed reported that they had “made more purchases online” in the past week while less than 10% “made more purchases in-store.”

A Ho-Hum Christmas Spells Trouble at the Mall

Chains and independent operators were already shuttering thousands of stores in recent years—despite a relatively robust economy—and the pandemic recession has accelerated the rate. Retailers were already on pace for record store closings and bankruptcies this year. A weak holiday shopping season would only magnify the losses.

The damage will course through the entire economy as workers lose their jobs and bank loans sour. But the pain will be felt most acutely by the shopping centers housing these retailers and the private investors and REITs that own them. This was already a tough year for retail owners. Vacancies are now at their highest level since 2013 in neighborhood and community centers and their highest level in two decades in malls per Moody’s Analytics. Many stores still open are struggling for viability with a fifth of shopping center rents going uncollected in September according to NAREIT, the industry group representing many leading shopping center owners.

The impact on landlords has been unfortunate if not shocking. Two major shopping center REITs, CBL & Associates Properties (CBL) and Pennsylvania REIT (PEI) both filed for bankruptcy protection this month, the first bankruptcies in the sector since GGP filed a decade ago at the height of the Great Financial Crisis. Both owners had experienced severe revenue declines this year due to falling occupancy, rents levels, and collections. Then just this week, Simon Property Group (SPG) announced it was walking away from four malls and that Taubman (TCO) agreed to a 20% price cut in its takeover by Simon.

With a weak holiday season in the offing, the prospects for retail REITs and their tenants will darken further.