Himalayan border tension is ‘a recipe for disaster’

India has been on the back foot in its disputed Himalayan border region since early summer when it discovered Chinese troops had dug in on mountain ridges that New Delhi claimed as its own. After talks on a Chinese withdrawal failed, a vicious high-altitude brawl in June claimed the lives of 21 Indian soldiers and an unknown number of Chinese troops.

But last week India grabbed the initiative, sending thousands of troops to take possession of heights in the Chushul sector of the Kailash Range that gave them a strategic vantage point over Chinese border positions.

This competitive jockeying for position by rival armies in the treacherous, inhospitable terrain of Ladakh is part of a dangerous breakdown of a decades-old arrangement between the nuclear-armed neighbours, which fought a brief and bloody border war in 1962.

China drew the lesson that . . . you have to use your army’s might to support your position.”

China’s advances prompted India’s army to strengthen its own positions. The result has been a sharp escalation in tensions and a huge military build-up. Tens of thousands of rival troops, armed with heavy weaponry, are now in proximity in the once relatively quiet and sparsely populated border area.

“It’s an accident just waiting to happen,” said Gautam Bambawale, India’s former ambassador to Beijing. “What they are doing now is they are saying ‘we will unilaterally decide where the line of actual control lies in Ladakh’. That is a recipe for disaster. It is not acceptable to us.”

Yun Sun, director of the China Program at the Stimson Center in Washington, said Beijing had grown frustrated after years of talks that failed to make progress on a mutually defined line of control, while India developed infrastructure in areas that China considered its own.

“A settlement or a rough consensus on the line of control can only be settled on the ground,” Ms Sun said. “They had attempted to reach a consensus. But what the Chinese found out is that the Indian negotiating position was ‘what’s mine is mine, and what’s yours is negotiable’.”

Analysts have warned that there could be more skirmishes in the next few weeks as both armies seek to improve their ground positions. The two countries also face the prospect of a high-altitude stand-off during the harsh winter, when temperatures on the Tibetan plateau fall to -40C.

“The Indians will now have to patrol the border with China in a manpower intensive way,” said Brahma Chellaney, professor of strategic studies at New Delhi’s Centre for Policy Research. “It will be a very expensive proposition but India will have to bear this cost. There is no other choice.”

Since the 1990s, China and India established a relationship in which they steadily deepened their trade, investment and economic ties, while the tricky issue of demarcating their 3,488km border was left to simmer. 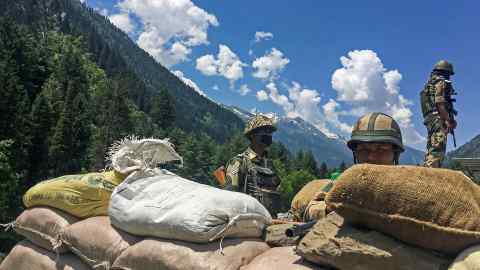 Beijing and New Delhi agreed elaborate protocols for “maintenance of peace and tranquillity” in disputed areas of Ladakh’s desolate high-altitude desert, with its reduced oxygen levels, deep snow and peaks of 18,000 feet.

Encounters between rival border patrols have grown more frequent and increasingly violent in recent years, especially after a 2017 stand-off between Chinese and Indian troops on Doklam Plateau, a territory claimed by both Beijing and New Delhi’s de facto protectorate Bhutan.

Lin Minwang, an international relations scholar at Fudan university in Shanghai, said China was no longer willing to “allow” India access to Chinese built roads along a series of ridges on the north shore of Pangong Lake. China claims the area as its own but Indian troops were previously able to patrol there.

New Delhi has demanded the withdrawal of the PLA troops, but Beijing has refused.

“India wants to return to the situation of a few months ago, where China allows them to go into areas it claims,” Mr Lin said. “It’s not that China has become more unyielding but rather that after the 2017 Doklam stand-off, China drew the lesson that . . . you have to use your army’s might to support your position.”

Although New Delhi has described its taking of the heights of the Kailash range as a pre-emptive action to bolster its defensive posture, Mr Lin said Beijing viewed the deployment as strengthening India’s hand in talks over a wider disengagement, and a return to the status quo.

Video: Why India is reconsidering its attitude towards China

But Indian analysts said June’s fatal border stand-off marked the end of an era in Sino-Indian relations. Given the high levels of mutual suspicion and mistrust, they warned that tensions along the border would probably cast a long shadow over Sino-Indian relations in many other areas, too.

READ ALSO  China pledges to be ‘carbon-neutral’ by 2060

“The whole architecture for maintaining peace and tranquility has collapsed and is lying in ruins,” said Mr Bambawale.

“The Chinese have decided they want a hard boundary. By taking this action, they have very clearly spelt out what kind of relationship they would want with India. It is going to deteriorate politically, militarily and economically.”

The defence ministers of India and China met on the sidelines of Shanghai Cooperation Organisation meeting in Moscow this weekend, where they agreed to work towards easing tensions.