Hermès and Kering add to signs of luxury goods recovery

French luxury groups Hermès and Kering have delivered forecast-beating sales for the third quarter despite the pandemic, as strong demand in Asia and the US offsets continued weakness in Europe because of the lack of tourists.

Hermès, known for its Birkin handbags and silk scarves, was the first big luxury group to return to quarterly growth after its comparable sales, which strip out the impact of currencies and acquisitions, rose 6.9 per cent to €1.8bn. Leather goods, its largest division, rose 7.8 per cent on a comparable basis to reach €879.8m, beating the 2 per cent expected by analysts.

Larger rival Kering limited the sales contraction in the third quarter to 1.2 per cent on a comparable basis to reach €3.7bn helped by strong demand in China and the United States. Analysts had expected a 10 per cent comparable decline.

But Gucci, Kering’s biggest brand, fared worse than competitors because of its reliance on tourists shopping in Europe and Japan, causing revenue to fall 8.9 per cent on a comparable basis to €2.1bn. The group’s smaller brands Yves Saint Laurent and Bottega Veneta both returned to growth to reach €843m.

The results point to signs of a tentative recovery for luxury groups after lockdowns and store closures paralysed the industry earlier this year. Sector leader LVMH last week reported forecast-beating 12 per cent comparable sales growth at its leather goods and fashion division driven by brands Louis Vuitton and Dior.

Nevertheless, the sector is grappling with its worst downturn in decades as the pandemic prompts wealthy consumers to delay purchases and hampers usually free-spending Chinese tourists from travelling to Europe. Analysts have predicted sales will fall as much as 30 per cent this year and take up to three years to recover.

Luca Solca, analyst at Bernstein, said updates so far this quarter showed how the sector’s biggest companies were faring better than smaller ones.

“Global luxury goods demand has materially revived over the summer, never mind the fact that intercontinental travel is still virtually non-existent. Best-in-class companies are already producing year-on-year growth in the third quarter, much ahead of start of Covid-19 industry estimates,” he said.

The Covid-19 pandemic has also made luxury goods makers more willing to sell more inventory via their own websites or on retailers’ sites such as Farfetch and Yoox Net-a-Porter. During lockdowns, ecommerce proved a lifeline, although most brands still want the lavish in-store experience to remain central to luxury.

Hermès on Thursday said its website now generated more revenue than any of its individual flagship stores, and was growing rapidly. Kering said 13 per cent of sales in the first nine months of the year came from ecommerce compared to 6 per cent in the same period a year ago. 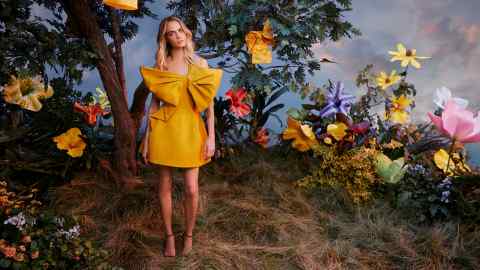 Despite online growth, Kering admitted that Gucci had “a lot of room for improvement” to win over a local clientele in Europe.

In contrast, Hermès benefited from “better insulation from a lower than industry average exposure to tourist demand”, said Thomas Chauvet, analyst at Citigroup, estimated at 20 per cent of sales versus up to 35 per cent for competitors.

Hermès and Kering declined to give financial guidance for the rest of the year given the uncertainty over the pandemic. Eric du Halgouët, Hermès chief financial officer, said the recent resurgence of coronavirus cases in Europe and the US did not affect sales in the first half of October, but it was too early to tell if there would be a drag from new curfews and lockdowns.

Kering chief financial officer Jean-Marc Duplaix said investors might be underestimating the fact that luxury companies would need to reinvest in marketing after pausing many projects in the first half of the year.

Hermès shares have risen 22 per cent this year, outperforming LVMH’s 3 per cent rise and Kering’s 2 per cent fall.