Here’s Why 2020 Belongs To Microsoft (NASDAQ:MSFT) 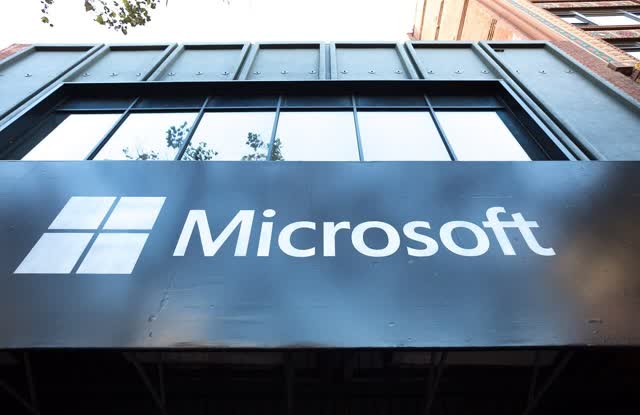 When the acronym FANG was created and later extended to FAANG, tech investing was dominated by mobile, advertising (led by mobile), over-the-top streaming and e-commerce. Today, tech stock investors would be remiss to not have cloud in their tech portfolio as the category has proven to be secular and insulated from economic drawdowns.

Microsoft is a central hub to the cloud trend with nearly every segment of its revenue driven by cloud except PCs/Surface and gaming, although gaming too will shift toward cloud. With Microsoft being nearly a pure play in cloud computing while boasting a $1.5 trillion market cap, the talking heads in media may need to find a new acronym.

I’ve covered the sheer supply of cloud software companies potentially weighing on returns in the coming months as the market begins to sort the winners from the losers this year. There are likely to be cutbacks across all budgets and these COVID-19 cutbacks did not show up yet in the first quarter due to the limited, two-week exposure in March before companies started reporting (this lack of exposure in Q1 may seem obvious but the market has certainly not priced this in).

Satya Nadella made a bold statement in the last earnings call that the company had seen two years’ worth of digital transformation in two months. He cited a surge in demand from the structural changes due to companies quickly reorganizing.

The coronavirus shutdowns accelerated cloud usage from current customers yet the most important impact is that it forced slow-to-adopt companies and industries to migrate to the cloud overnight. These slower-moving companies are more likely to adopt a hybrid cloud strategy which is where Microsoft excels over the competitors.

My original thesis when I began covering Microsoft nearly two years ago was that the company would rival AWS due to its focus on hybrid cloud. Historically, Microsoft was built around on-premise and the company is well situated to assist in a more conservative slow migration, especially for enterprises with significant intellectual property or unique security concerns. According to a 2018 survey, the top reasons for using hybrid cloud include controlling where important data is stored, at 71%, and using cloud for backup and disaster recovery, at 69%.

Hybrid cloud allows for scenarios where customers can keep their most sensitive data on their own servers while sending workloads to the private or public cloud that gain an advantage from mining data more efficiently and require improved accuracy and productivity. Azure’s strength in hybrid computing has made it the main player in the industry with the product being used by 95% of Fortune 500 companies.

Microsoft’s Windows operating system has run on servers for decades, and it was a natural extension to offer Azure Cloud to run on-premise. Specifically, the company’s presence in traditional on-premise deployments of server and SQL databases have propelled Azure forward as an obvious choice for public and hybrid cloud deployments. This is due to being the path of least resistance for on-premise to Azure.

This prompted my prediction that Microsoft would beat Amazon (NASDAQ:AMZN) in a contract for the Department of Defense and I believe Microsoft will win yet again from the coronavirus shutdowns for the same reason.

Azure’s strength in offering both on-premise and cloud in a hybrid solution has prompted Amazon to chase Microsoft with recent efforts to improve its hybrid strategy. According to a Goldman Sachs survey pre COVID-19, the majority of executives preferred Microsoft Azure over AWS. The survey is done bi-annually and Microsoft has been ticking upward in the results since 2017. With that said, AWS is capturing an estimated 200% more revenue than Microsoft on cloud infrastructure at $9 billion for AWS compared to $4.33 billion on Azure (per analysts).

Notably, the Goldman Sachs survey may not have taken into account that outside of the Fortune 500, AWS has a loyal startup and SMB following, and also is popular with agile enterprises that scale quickly, like Netflix and Facebook. Often times, these companies look outside Microsoft’s walled garden.

For comparison purposes, some of Microsoft’s offerings are cheaper than AWS while having a larger global data center footprint. In the most recent earnings report, Microsoft stated it had more data center regions than any other cloud provider. New center regions announced in this quarter are Spain and Mexico. It plans to invest $1.1 billion over five years in Mexico. In Spain it plans to open Azure regions and also expand its Telefonica relationship. This is especially helpful as compliance regulations require local data storage.

The story of the year may very well be cloud productivity apps. Microsoft Teams, though not exactly a verb, has been seeing rapid growth among Office 365 users. According to the recent earnings report, Microsoft Teams has increased 70 percent quarter-over-quarter to 75 million daily active users. This is up from 44 million daily active users in March. Perhaps even more impressive, Microsoft saw 200 million meeting participants in a single day in April.

This isn’t to say that Microsoft Teams will wipe out competitors outside the Office software ecosystem but it’s certainly going to help the company protect its turf. Zoom Video (NASDAQ:ZM) is likely to hold more mindshare as consumers also can enjoy HD video and office workers can share video links seamlessly outside of Microsoft’s enterprise walled garden. Slack (NYSE:WORK) is likely to lead on innovation as a developer and programmer favorite. After all, AWS is still in the lead over Azure and these customers will want a Microsoft alternative.

For the Fortune 500 and the 250 million who don’t mind Microsoft’s walled garden then Microsoft Teams offers valuable collaboration features, such as sending files within the apps, and holding video or audio calls. As of now, 20 organizations with more than 100,000 employees use Teams with Accenture being the first company to surpass 500,000 users.

Beyond enterprise companies, Microsoft Teams also is seeing inroads into education and healthcare from the coronavirus shutdown. According to the fiscal Q3 earnings call, more than 183,000 educational institutions rely on Teams with an emphasis on global education, including the United Arab Emirates, which has more than 350,000 students using Teams, and Italy, which moved over 80,000 students to Teams in just three days.

The healthcare industry has 34 million users on Teams, including in New York and in the UK. Microsoft also launched its first industry-specific cloud offering that allows organizations to work horizontally across apps, like Dynamic 365 and Azure IoT, for virtual visits, chatbot assessments, and remote health monitoring.

The CDC and various healthcare systems are using the Microsoft Health Bot Service to build and deploy AI-powered virtual assistants that reduce the workload on emergency services. As of early April, about 1,200 instances of COVID-19 bots had serviced 18 million individual users and served 160 million messages.

Microsoft also expanded Teams recently with the Booking app, which allows healthcare providers to schedule, manage and conduct provider-to-patient virtual visits with Teams. Depending on the size of the organization, this could be a competitor to Teladoc (NYSE:TDOC).

Microsoft has many inroads into cloud and is nearly omnipresent in this category. There’s a halo effect that allows for upgrades into premium products and increased renewals. When it comes to industry-specific data needs, such as health care, Microsoft also will be a strong competitor for its experience in strict compliance across data-driven environments. I believe Microsoft’s biggest strength will take center stage this year, which is massaging the more conservative enterprises to adopt cloud with hybrid architectures. Teams, as well, could not be in a better position to strengthen the walled fortress.

Last quarter, we predicted many Q3 earnings beats, including Alibaba’s surge from $160, a small cap that gained 20% in one day, Alteryx pullback (to the dollar) and extensive coverage on 5G for 2020 gains.

Give your tech portfolio an edge.

Disclosure: I am/we are long MSFT.

Additional disclosure: I’m also an investor in both Zoom Video and Slack and recommend these stocks to my premium service.

Previous PostProviding infrastructure and services in times of crisisNext PostIs The NBA’s Reopening a Warning Sign for the U.S. Economy?