Here’s how Americans are saving for retirement

Even as the U.S. economy strengthens, many Americans are struggling to stash away extra cash for a very important expense: retirement.

Overall, 42 percent of Americans reported having no retirement savings at all, according to a 2018 survey from the Center for Financial Services Innovation.

The next most common form of savings were those not stored in retirement accounts, a strategy that slightly more than 40 percent of people reported using. 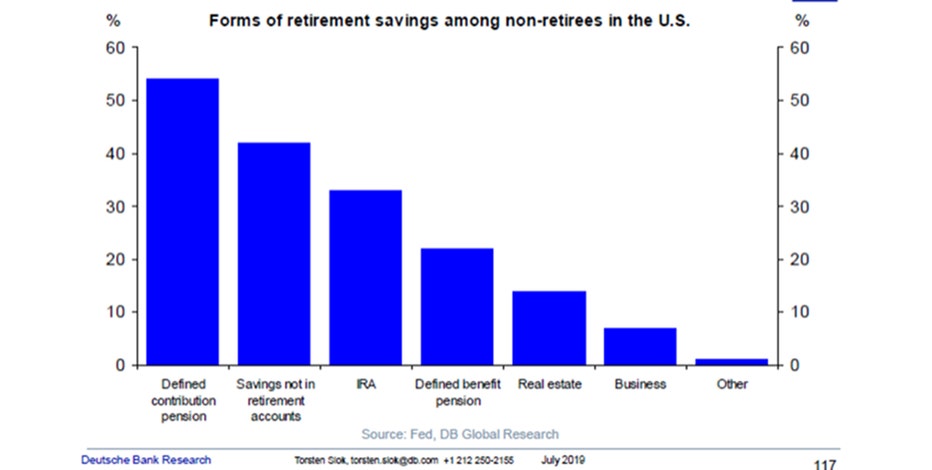 A defined benefit pension is an employer-sponsored plan where benefits are based on things like salary and years of employment. These types of plans assure a specified monthly benefit at retirement.

As previously reported by FOX Business, publicly-funded pension plans with more than $1 billion in assets earned a median return of 67.9 percent in the 12 months that ended on June 30. Those numbers were below expectations for the first time since 2016.

On average, about half of Americans may experience a shortfall covering essential expenses in retirement, according to Fidelity Investments. Nearly one-quarter of American workers don’t expect to ever retire.

In fact, the employment-to-population ratio for those aged 65 and over hit 20 percent last month, which is a record high. Employment among the demographic has been on an upward trajectory for about 20 years.

While defined contribution plans were the most popular, according to the White House 38 million Americans in the private sector do not have access to retirement plans through their employers. The administration recently announced a rule to expand the ability of small businesses to band together to offer joint plans for employees.