It’s been a few months since I last wrote about Hercules Capital (HTGC), and since then, the share price has not budged much at all. What I like about the Seeking Alpha article feature below is that it also calculates the total return as well. As seen below, when dividends are included, the stock has had a total return of 2.47% since May 19th, for an annualized return of 9.9%, which isn’t bad, especially for income-oriented investors. In this article, I evaluate whether this stock still makes an attractive investment, so let’s get started! 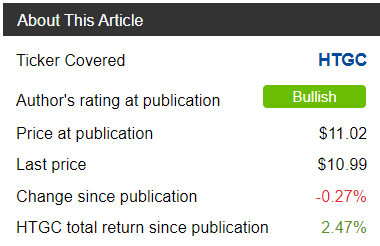 A Look Into Hercules Capital

Hercules Capital is a leading internally-managed Business Development Company (BDC) that focuses on venture debt investments in the technology, life sciences, and renewable technology industries. Since its founding in 2003, Hercules has committed over $10.5 billion in capital to over 500 emerging growth companies such as 23andMe (DNA), DocuSign (NASDAQ:DOCU), Ancestry.com, Box (NYSE:BOX), and Pinterest (NYSE:PINS). Currently, it has $2.5 billion in assets under management, and made $266M in new investments during the latest quarter ended June 30th.

What I like about Hercules Capital is that it’s strategically located at the heart of Silicon Valley in California, which puts it in close proximity to many of the country’s leading venture capital and startup firms. This provides the firm with not only a pipeline of talent but also valuable partnerships and insights into the latest technological innovations. This is supported by the more than 1,000 co-investments that HTGC has participated in, with venture capital and private equity firms since its inception.

Recently, one of the risk factors that came to light for the company is the yield compression that took place, as a result of falling interest rates. Its current portfolio effective yield sits at 12.2%, which is 140 bps lower than the 13.6% effective yield back in Q1. This, combined with lower loan prepayments, resulted in an NII of $0.32 in the latest quarter, which is $0.05 below the $0.37 that it generated back in Q1.

I see further risks stemming from depressed rates as being limited, however, because the benchmark interest rate has already reached zero percent, and the Fed Chairman has signaled that he’s not willing to go into negative rate territory. In addition, most of HTGC’s portfolio yield is already at the contractual floor, as noted by the CEO during the last conference call (emphasis added by author):

“We had about $0.01 to $0.02 impact from the March Fed funds rate cuts. We’re obviously announcing that 95% of our entire portfolio is now at its contractual floor. So we don’t see any further yield compression coming from any further rate cuts on a go-forward basis. And on the fee income side, going forward, it’ll largely be driven by the amounts of prepayments and the vintage of the prepayments that we have on a quarterly basis.”

Investors should be mindful that, as a result of the lower prepayments and yield compression, the dividend coverage is currently without any buffer. The dividend coverage, as per the NII to dividend ratio, currently equates to 100%. The company does, however, have $0.64 in spillover income to cover any near-term shortfalls. In addition, management seems committed to maintaining the payout, as noted in the last conference call (emphasis added by author):

“With our spillover and current operating outlook, we do not currently see or anticipate any near-term downward changes to our quarterly based distribution. I am also very pleased and proud to have announced that we have now surpassed over $1 billion in cumulative distributions since our public debut in June, 2005. It is a testament to the sustainability of our franchise combined with our shareholder aligned internal management structure that has allowed us to reach this significant milestone.”

I believe there is potential for the dividend coverage to improve in future quarters with the resumption of a normal level of prepayment activity, and with incremental income from add-on investments. Encouragingly, NAV currently sits at $10.19, which represents a 2.7% increase since March 30th. In addition, only one new non-accrual was added during the last quarter. Currently, HTGC has just 5 loans on non-accrual, representing just 0.5% of the portfolio at fair value.

I see the potential for further increases to NAV (and dividend coverage) through the recently announced equity raise for 16.5M shares, which, at the current price, represents a 1.08x Price-to-NAV. While this equity raise is done at a Price-to-NAV that is below the ~1.25x historical average, it could still be relatively as accretive due to less competition for deals in the current recessionary environment. This is supported by the fact that many externally-managed BDCs are trading at a discount to NAV, and are therefore having a harder time in raising equity.

In addition, I’m also encouraged by the Green Light letter that HTGC received from the Small Business Administration for a new SBIC license, which could give the company access to an additional $175M in long-term debentures by the end of this year. This, combined with the recent equity raise, can continue to support the impressive investment track record that the company has had over the past decade, as seen below: 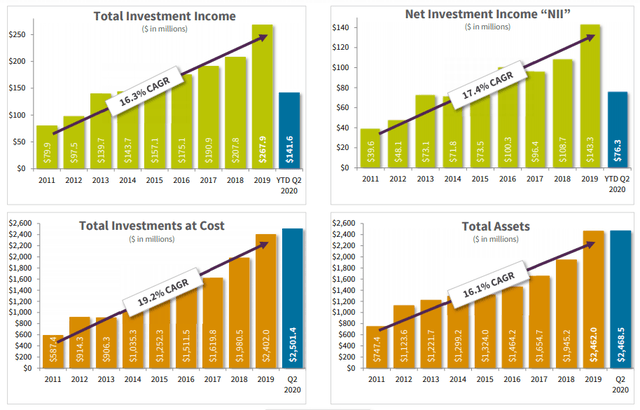 Hercules Capital is a leading internally-managed BDC that focuses on venture debt investments in the technology, life sciences, and renewable technology industries. Its high-quality portfolio is evidenced by the continued growth in NAV per share, with non-accruals representing just 0.5% of the portfolio at fair value.

While the dividend coverage is currently tight, I see the potential for coverage to improve with a resumption to a normal level of prepayment activity. In addition, funds from the recent equity raise, and an additional $175M in funding from a new SBIC license by the end of this year can result in add-on investments that could further improve dividend coverage. As such, I find the current 11.7% dividend yield to be attractive. I have a Buy rating on HTGC at the current price of $10.99, representing a Price-to-NAV ratio of 1.08, which sits well below its 5-year Price-to-NAV range of 1.1 to 1.4. 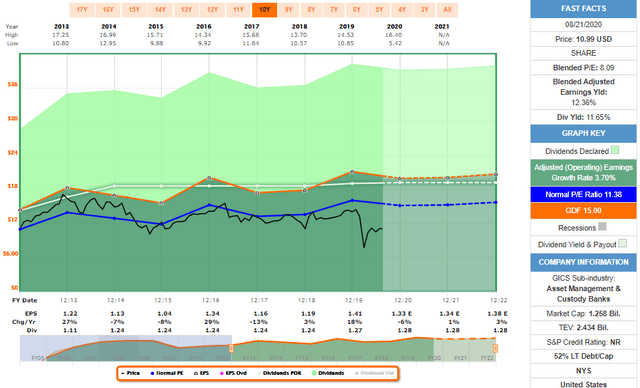