A Bit Of A Delay for Helix

At the time when many offshore projects look uncertain, Helix Energy Solutions (HLX) has done well to increasingly diversify into the renewable energy business. While the falling offshore capex will adversely affect its financial results in the short term, revenues from servicing the offshore wind industry will act as a cushion. The company’s management is focused on maintaining high utilization levels, even at the cost of lower pricing. Unless sales in the market growth, I think the strategy can undermine its operating margin in the medium term.

In recent times, it has stacked a few of its well intervention vessels, while the visibility is not clear for some of the vessels beyond 2020. I think a renewal of some of the offshore project FIDs (final investment decision) will offset the pressure in the medium term. HLX’s financial risks are low due to low leverage and sufficient liquidity. However, I think the company needs to stabilize cash flows to avoid strains on the balance sheet and to improve investors’ sentiment. Until then, I do not see much upside in the stock in the short term. 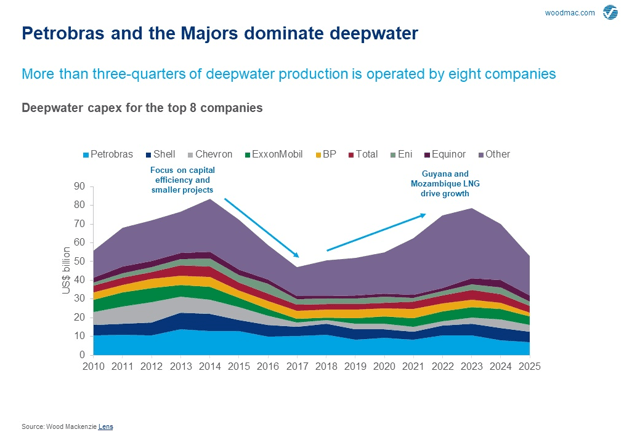 The impact of the coronavirus outbreak negatively affected the already depressed offshore market. We have seen over the past few years that an oversupply in the offshore service segment has kept rates down. Given lower demand, HLX warm stacked the Seawell and the Q7000 (well interventional vessels) in 2020 to reduce operating costs. However, the company’s focus on logistics and safety requirements led to incremental costs in recent times.

According to a Wood Mackenzie Energy report, the global deepwater crude oil production is set to reach 14.5 million boe/d by 2025. Brazil leads the chart with respect to investment and production, but major discoveries have been made in Mozambique, Israel, Egypt, and Guyana. Although the crude oil price is still well below its year-ago level, Q2 saw some positive developments, including the seasonal increase in activity in the North Sea and higher utilization in well intervention in the Gulf of Mexico.

Before we move on the segment drivers, let us see how utilization and rates have been trending in recent times. According to the company’s management, utilization is the primary driver and is more important than the day rate. In Q1, utilization was low because of the maintenance activities, while in Q2, it remained low, generally, except a few surprises from new project approvals. In the near term, the company expects to offer pricing discounts to improve utilization. Rates were low, too, due to an uncertain commodity price environment and the impact of the supply chain. So, I think the company can improve margins in the short term due to improved utilization.

The company’s Well Intervention vessel utilization remained unchanged at 72% in Q2 compared to a quarter earlier. In Brazil, despite the pressure, it remained firm at 99% with Petrobras (PBR) as the primary customer. Much of the work done in this region was related to production enhancement work and abandonment work by Siem Helix 1 and Siem Helix 2.

In the North Sea, the company warm stacked Seawall and Q7000 and will likely operate with a single vessel – Well Enhancer for the rest of the year. In the Gulf of Mexico, the Q5000 has been working for BP (BP) in 2020. The vessel had 87% utilization with zero commercial downtime on the first well. The Q4000 has contracted work through August, which may extend up to Q4. The Q7000 will likely commence operations in Nigeria later in Q4 or Q1 2021. 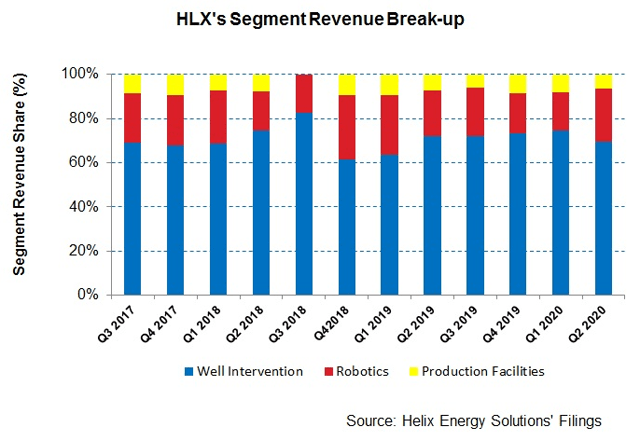 In Q2 2020, HLX’s revenues from the Well Intervention segment increased by 4% compared to Q1 2020, following a 1% decrease in the previous quarter. Operating income in this segment turned positive during the same period. The quarter-over-quarter improvement was primarily due to the resilient utilization level. 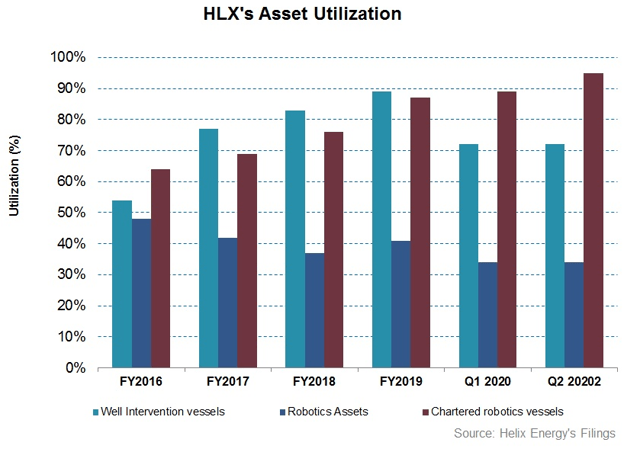 In the Robotics Charter fleet, the utilization remained unchanged at 89% in Q2 2020 over a quarter ago. Investors may note that most of the vessels in Robotics were used in renewable energy projects in the North Sea, the APAC region, and the Gulf of Mexico. The quarter-over-quarter segment revenues increased significantly (57% up) in Q2 following the seasonal improvement in trenching and the impact of a wind farm site clearance project in the North Sea.

HLX expects the Robotics Charter segment to be resilient in the near term as many of the vessels are catering to the renewable wind farm operations. So, an active renewable wind market is offsetting much of the decline in an otherwise declining robotics market. Plus, the company has been reducing costs to protect margin. As a result, the company’s operating income turned to a $7.8 million profit in Q2 compared to a $2.8 million loss in Q1. Two of its VOO will continue to be deployed to the wind farm survey and site clearance project until Q4. On top of that, the vessels can also be used in a North Sea decommissioning project.

According to the company’s latest forecast, revenues in FY2020 can decrease by 7% compared to FY2019 (at the guidance mid-point), while the yearly EBITDA can decline by 23%. This also means that its revenues and EBITDA can decrease by 17% and 7%, respectively, in 2H 2020 compared to 1H 2020. Free cash flow, on the other hand, can more-than-double in FY2020 compared to a year ago. Compared to 1H 2020, the free cash flow improvement will be more remarkable (i.e., negative to positive) in 2H 2020.

In FY2021, the company expects the current offshore market challenges to continue. However, it also expects many offshore projects, which stand deferred as of now, to be realized in 2021, which will benefit the company’s well intervention segment performance. The rise in the crude oil price will likely warrant the well intervention jobs as cost per barrel decreases. HLX will also benefit from decommissioning work if that happens in the medium term.

Europe, currently, accounts for ~80% of global installed capacity in the offshore wind at the end of 2019. Regarding the offshore wind business prospect, Rystad Energy estimates that in Europe, the annual capex in this industry will rise by 24% in 2020 and is set to double by 2022, which is in contrast to a 32% expected fall in capex in oil & gas in this region during the same period. So, HLX has made a timely move by setting a target to establish in this business, which will mitigate the decline in the traditional energy business. 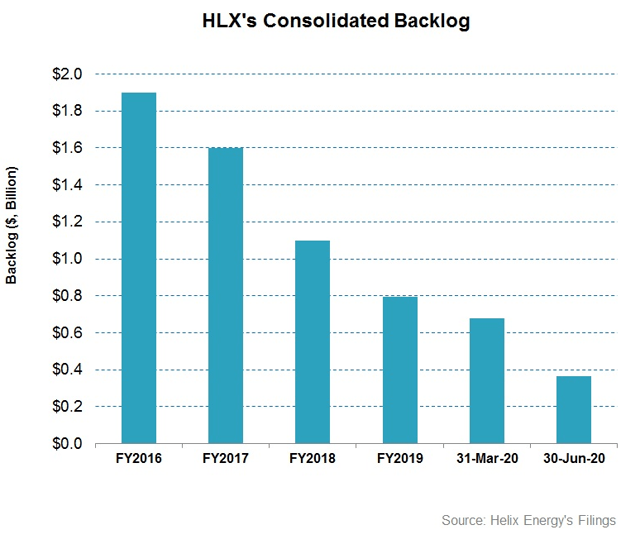 As of June 30, 2020, HLX’s backlog was $0.37 billion, which was a 46% decrease compared to a quarter ago. Lower backlog typically indicates lower visibility into future revenues. Approximately 54% of the current backlog is estimated to be completed during the remainder of 2020. A five-year contract with BP for work in the Gulf of Mexico with the Q5000 semi-submersible vessel, contract with Petrobras for well intervention services offshore Brazil with Siem Helix 1 and Siem Helix 2, and a fixed-fee contract for the HP I accounts for the 83% of the backlog. 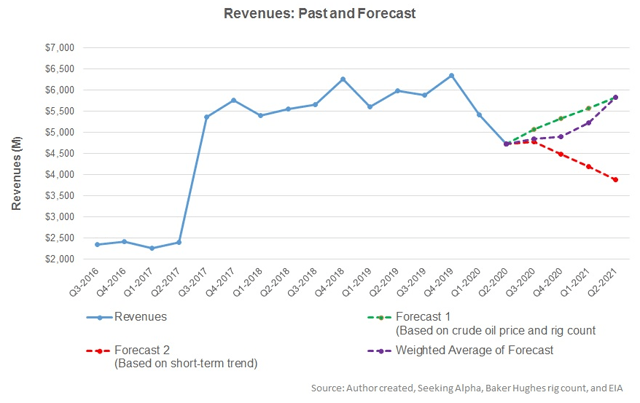 I have observed a regression equation based on the historical relationship between the crude oil price, the U.S. offshore rig count, and HLX’s reported revenues for the past 16 quarters. I think that the short trend factor will initially have a significant role but will gradually decline. So, I expect its revenues to decrease in the next quarter, and then steady and increase afterward in the following couple of quarters. 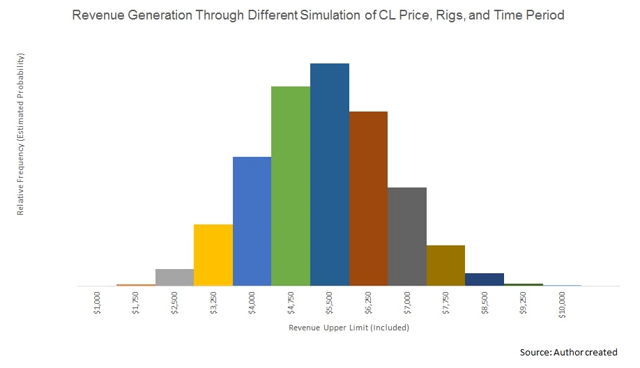 In the Monte Carlo simulation after 10,000 iterations, I find that the maximum frequency ranges between $1.33 billion and $1.85 billion. The current revenue falls within this range. However, investors should note that this is an academic exercise and is not part of any investment advice.

HLX’s cash flow from operations (or CFO) decreased significantly, while the free cash flow (or FCF) has turned negative in 1H 2020. Although the year-over-year revenues remained steady in 1H 2020, working capital deteriorated, leading to the fall in CFO in 1H 2020. The company’s management has lowered its FY2020 capex budget to $38 million, which is 76% lower compared to FY2019. Although I do not think the CFO will improve much in FY2020, a much sharper fall in capex can lead to some improvement in the FCF.

Since HLX’s liquidity (cash plus revolving credit facility) is strong ($350 million), it faces no repayment risk in the near term. Its debt-to-equity ratio (0.23x) is lower than many of its peers, which is advantageous when the energy environment deteriorates. However, over the medium term, the company, without refinancing, may need to improve cash flows to avoid strain on the balance sheet. Read more on the company’s balance sheet strength in my previous article here. 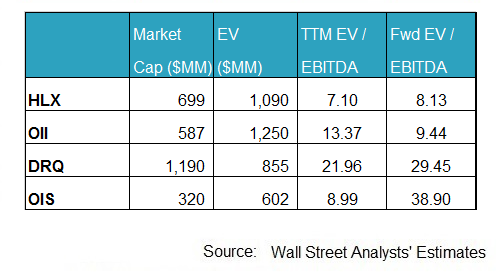 HLX’s forward EV-to-EBITDA multiple expansion versus its adjusted trailing 12-month EV/EBITDA is lower than peers, which implies a less steep fall in the EBITDA compared to peers in the next four quarters. This would typically result in a higher current EV/EBITDA multiple compared to the peers. HLX’s EV/EBITDA is lower than the peers’ average (14.8x). I have used estimates provided by Seeking Alpha in this analysis.

According to data provided by Seeking Alpha, six sell-side analysts rated HLX a “buy” in July (includes “very bullish”), while two recommended a “hold.” None recommended a “sell.” The consensus target price is $5.63, which at the current price, yields 21% returns.

According to Seeking Alpha’s Quant Rating, HLX, currently, receives a “Neutral” rating. While the rating is high on the momentum criteria, they are moderate-to-low on profitability, growth, revisions, and value.

What’s The Take On HLX?

The FIDs (final investment decision) in many offshore projects look uncertain at this price level. This can erode the offshore capex and adversely affect HLX’s short-term prospects. Since the company’s management believes that utilization drives its business, it has not shied away from advancing rate discounts. While the company has so far been able to hold onto its margin so far, I doubt, without persistent market growth, it will be able to keep margin steady in the medium term. The company’s backlog decreased significantly in Q2, which points to the impending pressure in the short-to-medium-term.

In the North Sea, for example, it operated with only one vessel and stacked the rest in the absence of peak demand. Brazil was a more engaging territory, although most of the operations limited to production enhancement work and abandonment work. The cold stacking of Q7000 depicts the steep activity fall in West Africa. While many of the offshore and deepsea projects can eventually be scrapped, some of them have been postponed to 2021, which can offset the pressure in the medium term. A more promising part of the company’s business is its foray into windfarm site clearance and survey projects. During Q1, it signed a contract adding a trenching backlog in Europe that will accelerate revenues in 2022 and 2023.

In the current environment, when growth has taken a back seat, cost-cutting and capital prudence determine an energy company’s survival. While HLX’s financial risks are low due to low leverage and sufficient liquidity, its free cash flow is abysmally low. While a much-reduced capex will improve FCF in 2H 2020, I think the company needs to stabilize cash flows to avoid strains on the balance sheet.