Some hedge funds are betting that the best days for the stock market’s coronavirus winners are in the past.

Shares linked to home computing and gym equipment, grocery retail and healthcare soared when the pandemic forced countries into lockdown earlier this year. Many were lifted by hopes that changing behaviour and shopping patterns as a result of Covid-19 would feed through into stronger, long-term earnings growth, even though some companies have until recently been unprofitable.

But some hedge fund managers are now betting against those stocks, in the belief that the boost to company earnings will fade away faster than many investors anticipate.

“We have begun shorting some of the Covid over-earners, companies where we feel the current trajectory of earnings is just not sustainable,” said Tim Campbell, co-founder and chief investment officer at hedge fund firm Longlead Capital Partners in Singapore, which manages A$300m ($215m) in assets.

Mr Campbell pointed to PC and laptop manufacturers whose growth had previously been flat or negative, but which had enjoyed “three fantastic quarters of growth” this year with employees and students working from home. “We think they will return to their pre-Covid growth rate at some point,” he added.

Some of the biggest risk-taking by hedge funds in recent weeks has been in the IT sector, driven by new short positions, according to a recent Goldman Sachs note to clients seen by the Financial Times.

But technology has not been the only hunting ground. Longlead’s Mr Campbell has also been looking for possible short ideas in companies producing as varied items as hand sanitiser, home gym equipment and fishing rods and reels.

Investors have spent the pandemic hunting Covid winners and placing positive bets on their stocks, especially in the face of 2020’s strong market rebound. Short positions — borrowing a stock and selling it in the hope of buying it back later at a lower price — can lead to theoretically unlimited losses. Sceptics argue that determining the true value of such stocks is difficult in an environment of ultra-low borrowing costs and huge government and central bank stimulus that keeps equities supported even in a downturn.

Hedge funds have made gains from short positions in companies such as cinema chains, bricks-and-mortar retailers and airlines, betting their earnings would be hammered by lockdown restrictions. However, such bets have looked less attractive after sharp price falls, or after governments stepped in to provide support to companies — leading funds to look for other targets.

“If we’re successful in getting a vaccine and the market thinks 2021 looks more normal, investors may think ‘let me sell companies where it’s as good as it gets now and buy companies with more cyclical earnings’.”

Another target for short sellers has been German meal-kit provider HelloFresh. The stock has been one of the standout winners during the pandemic, rising more than 150 per cent this year, driven by surging demand from consumers stuck at home during lockdown.

The company made a pre-tax loss in both 2018 and 2019, but posted a €172.1m profit in the first half of this year and said in August that it was seeing “exceptional” growth.

The value of bets against the company, as measured by stock borrowing, rose from less than €50m in late May to more than €170m in early October, having briefly risen above €230m in August, according to data group IHS Markit. 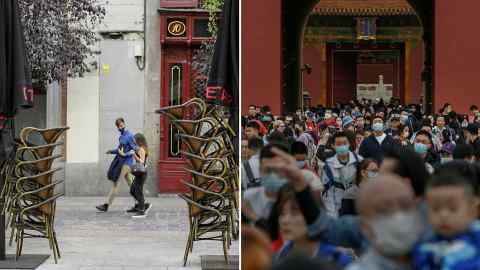 Tiger Management, which holds the biggest short bet, took its position in late May, while Lone Pine Capital and Palestra Capital have put on positions more recently, taking disclosed short bets to near their highest on record, according to analysis by data provider Breakout Point.

And in healthcare, some funds have been taking on some of the US market’s most high-profile winners: vaccine companies whose shares have soared during the pandemic.

Barry Norris, chief investment officer at Argonaut Capital, has begun shorting stocks including Novavax, which is up about 2,900 per cent this year, as well as Moderna and Inovio Pharmaceuticals, both up more than 280 per cent. Overall hedge fund bets against Moderna, for instance, have been volatile this year, rising from less than 5 per cent of shares outstanding in May to more than 9 per cent in August, and are now at 6.7 per cent, according to IHS Markit.

Mr Norris said that vaccines were “highly experimental” and that, as the number of patients in trials rose, “there will inevitably be significant negative side-effects discovered”.

He added: “The bigger question is, given we know only a small proportion of the population is subject to symptomatic infection and an even smaller cohort mortality risk, whether the risks of mass vaccination relative to focusing on improving hospital treatment is really worth it.”