Historic evidences of outcomes of prior MM forecasts provide the means of evaluating price-loss risk experiences against price-gain achievements in selecting odds-on choices to further the aim of capital-gain wealth-building portfolios.

HealthEquity, Inc. (HQY) appears now to be such a candidate.

What Do You Need to Know?

To make an intelligent investment capital commitment the investor should know these things – both about the proposed investment AND about the alternatives to it:

To get answers we look to the best-informed market participants – the market-makers [MMs]. These are the dozen to two dozen firms providing price quotations to exchanges and transaction systems as a result of their extensive 24×7 worldwide information collection systems and evaluation resources. It is a community of over 100,000 employees. The largest, Morgan Stanley employs over 60,000, Goldman Sachs employs over 35,000 full-time.

Present-day markets are driven by major investing organizations commanding multi-billion dollar portfolios with stock contents which can only be adjusted by negotiated volume (block) trades between peers, not by “auction”. Such trades set and move posted prices.

The individual investor typically is merely along for the ride. He/she needs to have a sense of where the negotiators are likely to head, pricewise. Conventional analysis often provides superficial descriptions and little linkage between operating minutia and price forecasts. As examples: 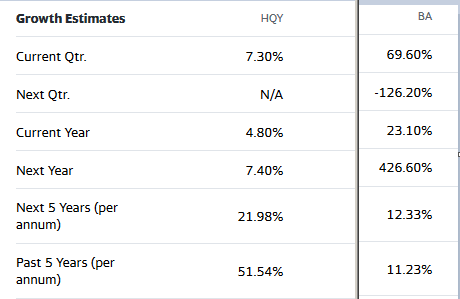 As said in the earlier article:

Unfortunately, the “smart money” intentions are intentionally concealed as well as possible, to prevent being “front-run” by anyone. Fortunately, the commonly-used means of negotiating volume trades leaves behind information helpful in providing the current intentions and judgments of the participants. Which is what we present, daily, for over a thousand widely-held, actively traded stocks and ETFs, like these.

Here in Figures 1 & 2 are relevant examples of their implied coming price range forecasts as they evolved daily over the past 6 months in 2020. 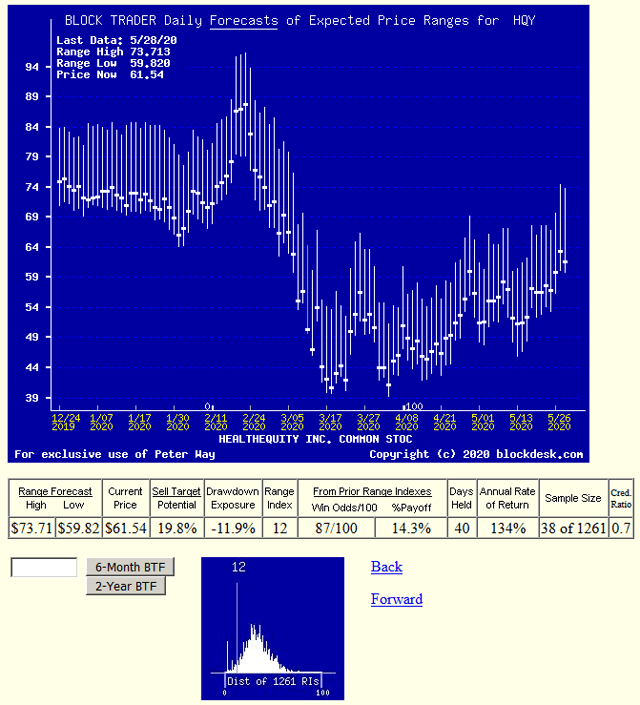 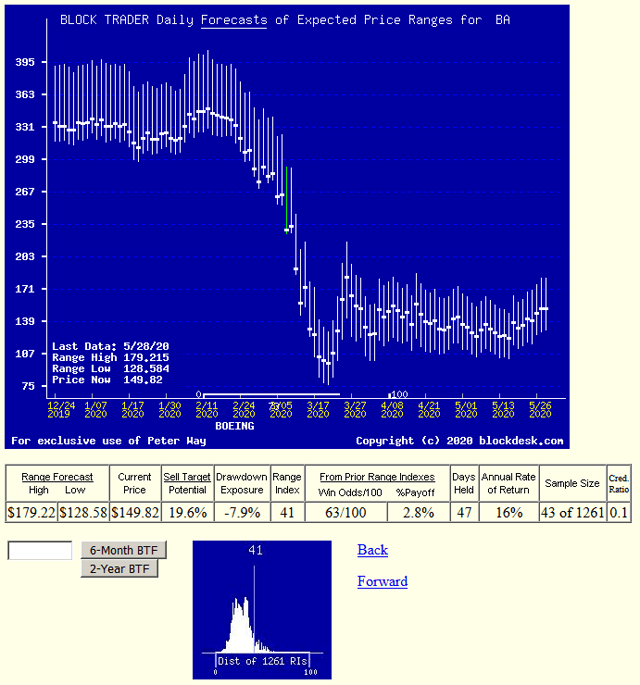 The vertical lines in these pictures are not actual past market prices like those seen in “technical analysis charts”. Instead they are forecasts of likely future ranges of market stock prices implied as probable in coming weeks and near months. The heavy dot in each vertical is the market close price on the day of the forecast. It splits the forecast range into upside and downside price change prospects.

The imbalances between up and down potentials are what is useful in estimating both coming price direction and extent of change. Their proportions are measured by the Range Index [RI]. Its value is the percentage of the whole forecast range which lies below the current market quote. A 20 RI has 4 times as much upside prospect as down. A 33 RI has only 2 times as much upside potential as downside.

Segregating past MM implied forecasts by their RIs produces clues to how market prices have reacted to the conditions seen by the MM community at various points in time. We use a 5-year sliding window to count how many prior forecasts (the sample size) have been like the current Range Index.

From those samples market history tells what the odds have been for profitable buy positions subsequent to the forecast dates, as well as the size of the average position payoffs, including loss positions. Other important decision factors can be evaluated by this type of analysis, and they are shown in the rows of data posed between the two blue-background pictures in each Figure. Those data rows are positioned in Figure 3 to make the comparisons between prospects for HQY and BA easier to perform.

Here the range forecasts are made explicit in columns [B] and [C] and are split by current market quote [D]. The upside price gain potential [E] is the percentage difference between [B] and [D]. We will come back to [F] later, as the worst-case risk exposure which has been actually experienced. [G] is the calculated Range Index [RI], 12 for HQY and 41 for BA.

Comparisons of the small lower pictures in Figures 1 and 2 of each stock’s distribution of the past 5 years’ daily RIs show HQY’s likely coming mean-reversion to be a higher RI (and price), while BA’s prospects are for lower RIs.

How likely and how good the profit prospects may be are shown in [H] as a percent of the sample size [L] and in [ I ] as an average profit percent on entry costs of all [L] positions, including losses. The current forecast quality is put in question [N] where [E]’s credibility is compared to [ I ]. BA suffers in this comparison where its capital gain payoffs are only 2.7%, while HQY has realized profits, net of forecast prior losses of +14.0%, while both have upside forecasts [E] of above +19%.

To answer questions 4 and 5 about risks in our earlier list of what we ought to know, the complement of [H] – (100-H) – or 100-63=37 for BA, tells that we might best be prepared to have our profit hopes disappointed in over one third of the 43 times we might buy BA when it has a RI of 41. For HQY the experience of having only one ninth of its 37 prior forecasts a loss at a RI of 12 makes the comparison here with BA quite bearable.

The BA loss exposures of -8% [F] were not quite double the worst-case stress for SPY, as shown in its comparison row of Figure 3. The HQY loss exposures were nearly triple those of SPY, but more than made up for that with Realized Gains of +14% [ I ].

The comparisons of HQY and BA stocks with the SPY ETF market-average may be helpful in developing a sense of perspective between these alternatives when the overall market environment is as it is seen as the market pros now do, rather than by the news media or doomsday market observers.

Our final question from the earlier “need to know” list is quite relevant in comparing HQY and BA as investment candidates. The average holding period for HQY to reach its [E] Sell Targets and produce the +14.0% average payoff was [J] 40 market days, or eight market weeks. BA spent nine+ weeks, earning only 2.9%.

So if the current situations were repeated (in the form of other stocks with identical payoff outcomes to these two) over the course of a year, the compound annual growth rates [CAGR] which would be produced would be [K] +129% for HQY but only 16% for BA.

When we use the [H] Win Odds and its complement to weight the [ I ] and [F] reward and risk dimensions to produce [O] and [P] we get an odds-weighted net of [Q] which makes the BA vs. HQY look even worse for BA.

Now it is realistic to question if the HQY isn’t a cherry-picking example designed to make “our favorite” BA look bad. The answer is no. We monitor over 3,500 stocks and ETFs daily, reject about a thousand of them as unable to justify price range forecasts of any credible nature, and sort the remaining 2,700+ to see what cream rises to the top.

In the eight months since our first HQY vs. BA article, HQY has appeared 8 times as a best-20 list buy, averaging 21% gains in 33 calendar-day holding periods.

The bottom row of Figure 3 shows what that exercise produces today, where the average [K] CAGRS of the 20 best are better than HQY. This is a fairly normal outcome where dozens of stocks with 3-digit CAGRs are encountered.

On many dimensions of investment decision the near capital gain prospects for HealthEquity, Inc. are far more desirable than those of Boeing Corporation (BA).

At this point, in the case of new capital to be put to work or freshly liberated cash needing assignment, an active investment strategy decision of commitment in HQY is a desirable decision for the near term looking to a sell target conclusion, not as a long-term hold.

Disclosure: I/we have no positions in any stocks mentioned, but may initiate a long position in HQY over the next 72 hours. I wrote this article myself, and it expresses my own opinions. I am not receiving compensation for it (other than from Seeking Alpha). I have no business relationship with any company whose stock is mentioned in this article.

Additional disclosure: Disclaimer: Peter Way and generations of the Way Family are long-term providers of perspective information, earlier helping professional investors and now individual investors, discriminate between wealth-building opportunities in individual stocks and ETFs. We do not manage money for others outside of the family but do provide pro bono consulting for a limited number of not-for-profit organizations.

We firmly believe investors need to maintain skin in their game by actively initiating commitment choices of capital and time investments in their personal portfolios. So, our information presents for D-I-Y investor guidance what the arguably best-informed professional investors are thinking. Their insights, revealed through their own self-protective hedging actions, tell what they believe is most likely to happen to the prices of specific issues in coming weeks and months. Evidences of how such prior forecasts have worked out are routinely provided in the SA blog of my name.

Previous PostMarriott opens all hotels in China, sees steady U.S. recovery: CEONext PostWhat I must do for my black daughter after George Floyd killing