HC2 Holdings (HCHC) is an investment holding company previously managed by Philip Falcone who has since left the company after a proxy fight. HC2 holds a diverse array of operating subsidiaries including DBM Global, ANG, Continental LTC Insurance, and HC2 Broadcasting. HC2 also has a portfolio of early-stage life science investments.

HC2 has been on a journey to delever its balance sheet ever since it ran into trouble refinancing the previous version of the 11.5% notes where Mr. Falcone confidently said that he could refinance the debt the next day in the 7.5% to 7.75% range, but ended up refinancing the bond at 11.5% with an additional $55 million 7.5% convertible that drove down the price of the stock.

To HC2’s credit, it sold Global Marine, one of its three main cash flow positive operating subsidiaries, for a total $390 million total value. The net proceeds to HC2 were ~$175 million after adjusting for subsidiary debt and pension obligations, as well as the 73% ownership interest. However, the net proceeds were only sufficient to redeem ~$128 million face value of the 11.5% notes as the redemption price was set at 104.5% of the face value under the indenture.

Ever since the end of the proxy fight, the focus of the board has been on the refinancing of the 11.5% notes with (hopefully) a lower cost of capital. The board has essentially put every operating subsidiary under strategic review. Most recently, HC2 has announced a $65 million rights offering with the Chairman of the board agree to backstop $35 million. Two other top shareholders (Michael Gorzynski, the investor who launched the proxy fight, and Jefferies Group) have informed the company that they intend to purchase at least their pro rata portion of the rights offering. HC2 expects to use the proceeds from the rights offering for general corporate purposes. Obviously, one of these purposes is to pay the coupon on the 11.5% notes and the 7.5% convert, together cost HC2 $43.5 million a year in interest payment.

In the absence of a large equity check that delevers the balance sheet, which is massively dilutive to the existing shareholders, HC2 can only rely on its remaining two cash flow positive subsidiaries: DBM Global and Continental LTC Insurance. One strategy would be an outright sale, and the other one would be a dividend recapitalization of the operating subsidiary and simultaneously upstream the cash to pay down corporate-level debt.

Depending on the M&A cycle, I believe DBM Global can be sold for a total enterprise value of $360 million to $560 million, and net proceeds to HC2 from ~$220 to $395 million. Some clients of DBM Global are delaying maintenance capex in 2020 but using 2019 as a “COVID-free” guidepost, DBM Global can generate $70-$80 million adjusted EBITDA, and 6.0-7.0x is a reasonable range for a construction business. 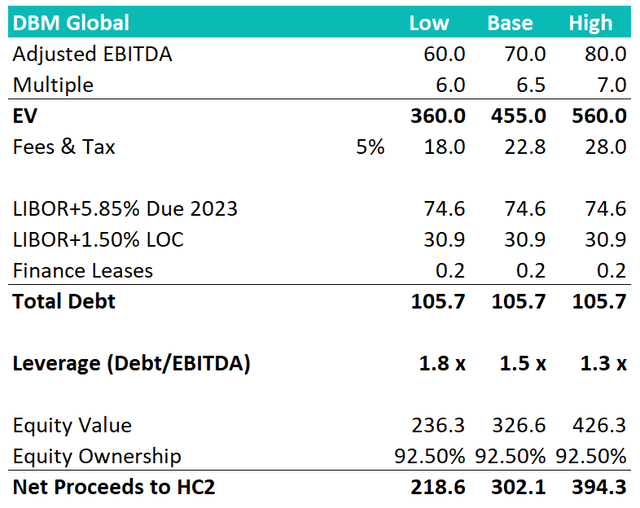 The main issue with selling DBM Global outright is that the net proceeds must be sufficient to turn HC2 into a debt-free business (at the corporate level) because ex-DBM Global HC2 doesn’t have much (if any) debt capacity at the corporate level. This means that HC2 must achieve the best-case scenario, or it’s not worth pursuing this strategy – a tall order in this environment.

As for the dividend recapitalization of DBM Global, I agree that DBM Global has remaining debt capacity but I’m not sure if it’s going to be enough. As shown above, DBM Global is already 1.5x levered. For a business that’s driven by backlog and the revenue can be quite volatile on a QoQ basis, I think DBM Global can add 1.0x additional debt at most. That’s $60-80 million upstreamed cash vs. close to $400 million of corporate debt ($342.4 million 11.5% notes and $55 million 7.5% convert).

HC2 was in exclusive talks with a buyer of the Continental LTC Insurance but after the proxy fight, the board decided to head for a different direction by letting the exclusivity period lapse. HC2 hasn’t provided any details on the rationale but I suspect that the bid wasn’t high enough is at least a part of it.

It’s always difficult to value a life insurance business. HC2 paid $15 million for the first major block of this business in 2015. The second block was purchased from Humana where Humana contributed $195 million, essentially to transfer the long-term care liability to HC2’s insurance subsidiary.

HC2 has been upstreaming cash flow from Continental via management fee. Effectively, HC2 is acting as the asset manager of Continental’s AUMs, and Continental pays a quarterly management fee to HC2. Initially, HC2 was targeting $15 million annual management fee, and the potential to dividend out excess capital. However, on the Q4-2019 earnings call, HC2 indicated that “both the management fee and dividend possibilities would not meet” their long-term expectations and objectives going forward. In fact, in FY2019 HC2 only received $11.5 million management fee and $9.5 million was on a LTM basis as of Q2-2020.

Continental doesn’t deserve a high multiple of its management fee because the big insurance companies have been a net seller of long-term care insurance businesses. Moreover, the insurance book is essentially in run-off mode, so it can’t generate organic growth. As long-term interest rate is going to stay lower for longer, the risk of assets running out before the liabilities has also decreased (although HC2 has repeatedly said that their regulatory-based capital position is strong). Let’s assume that an $8 million base management fee can be achieved, and assume an 8.0x multiple. At most, this hypothetical divestiture brings in $64 million before taxes and transaction fees. It simply doesn’t move the needle for the deleveraging target.

Selling HC2 Broadcasting is almost a non-starter. To my knowledge, HC2 is the only low-power TV station consolidator, so the number of potential bidders is limited. Also, it seems like asset sale proceeds must be applied to subsidiary debt first reading from the press release. This means HC2 won’t receive a dime until the $81.2 million subsidiary notes are paid off first. Finally, it sounds like even the refreshed board wants to grow this business instead of divesting it. Either the prospect is just too attractive to let it pass, or there are limited buyers so HC2 is forced to grow this business.

Perhaps a multi-step maneuver is needed here. HC2 could (1) sell Continental for $64 million, (2) dividend recap DBM Global to upstream ~$70 million cash, (3) negotiate with the 7.5% convert holders to extend the maturity, and finally (4) tap the high yield market for a more manageable $200 million issuance.

Shareholders of HC2 should realize that any of the steps above is negative for the equity value of HC2, to different degrees. Selling a major cash flow contributor, unless the price paid is very dear, lowers HC2’s financial flexibility. Dividend recap DBM is going to reduce its ability to upstream dividends in the future to service any debt remaining and paying for the holdco SG&A expenses. Extending maturity of the 7.5% convert will inevitably come with lowering the conversion price, that’s followed by a wave of short selling by the convert holders to hedge their delta. Most importantly, even if steps 1 to 3 are achieved, I’m not sure if the $200 million deal will come at a significantly reduced coupon as HC2 still relies on subsidiary to upstream dividend to service the holdco bonds.

HC2 has assembled a portfolio of businesses over the years but unfortunately, there’s a major mismatch between characteristics of the assets and the funding sources (i.e. holdco-level debt). Although the refreshed board is focused on changing this, I believe the HC2 will once again run into difficulties refinancing the 11.5% notes – unless the anchor equity holders are willing to write a much bigger check than the recently announced $65 million rights offering.