Has The S&P 500 Bottomed Out Yet? The High Shiller P/E Suggests Not

With the S&P 500 (SP500) having just posted its third consecutive day of gains, I’m sure many investors will be wondering whether the coronavirus-led sell off has created a tempting buying opportunity. Following a 35% fall in the S&P 500 to a more-than-three-year low of just below 2,192, the index has bounced back strongly to 2,630. This represents a gain of nearly 20% over less than four days.

However, it’s important to remember that major bounces can happen even within a continuing downtrend, due to the characteristic higher volatility levels that are evident during bear markets. This was what happened in 2008, when the S&P 500 saw some of its biggest daily gains in October 2008. That time, the index recovered strongly into the new year, but subsequently resumed its downwards trend until March 2009.

Another factor to consider is whether valuations seem cheap by historical standards. One valuation metric that might be particularly useful here is the Shiller P/E, also known as the cyclically adjusted price-to-earnings ratio, or CAPE. It is measured by dividing the index price by the average inflation-adjusted earnings for the past ten years.

This method stems from the observation that annual earnings are highly volatile, meaning valuation metrics based on short-term earnings may themselves be unreliable. Instead, the Shiller P/E ratio smooths out earnings over business cycles, presupposing that corporate profits in real terms revert to its historical trend over the long term.

In a paper published as early as 1988, Campbell and Shiller showed that this valuation metric was a powerful predictor of future returns, especially when returns were measured over several years. Since then, numerous researchers have found that the underlying relationship between the Shiller P/E and long-term returns continues to hold true since the late 1970s. 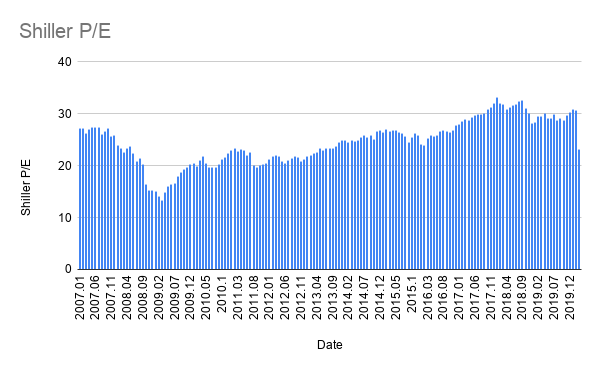 With Thursday’s closing price of 2,630, the S&P 500’s Shiller P/E currently stands at 24.6, which compares rather unfavorably against the long-term historical average of 17.0, using data going back as far as 1881. Furthermore, even when the S&P 500 was at its trough at 2,192 on Monday, valuations still seemed relatively expensive with the Shiller P/E at 20.5. 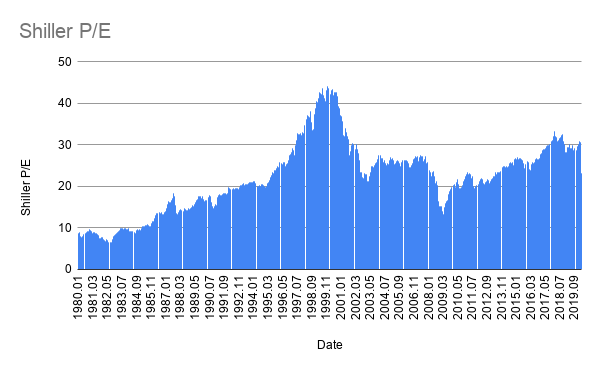 Still, the Shiller P/E is not without its shortcomings; the metric has plenty of detractors. The Shiller P/E for the S&P 500 has been known to remain at elevated levels for long bouts during extended bull runs, and returns can sometimes still be impressive even when the metric is above 25 (although on average over the longer-term it usually is not).

Others argue that the trend of capital’s increasing share of national income relative to labor, due to factors such as increased labor competition from the former Soviet bloc, China and other emerging markets, and weaker wage bargaining power because of declining union membership, should allow the Shiller P/E to deviate from long-term historical norms.

Moreover, growing sector concentration in recent years has reduced competition in many industries. This has led to a widening of firms’ profit margins and boosted their returns on equity, which could justify an upward shift in the Shiller P/E equilibrium.

Data from the US Bureau of Economic Analysis (chart below) shows that the share of after-tax corporate profits as a percentage of GDP in the US reached a post-war high of nearly 12% in 2012. The ratio has since slipped to roughly 8.5% in 2019 as the share of GDP going to wages and salaries crept up from record lows. Looking ahead, however, with the risk of a recession looming large, a sharp decline in corporate profits’ GDP share is almost certainly soon to come.

Stockmarket bulls may prefer to look at other valuation metrics, some of which will make market prices look more reasonable.

Forward-looking valuation measures, such as the prospective price-earnings ratio, which are based on next year’s predicted profits, look particularly flattering. This metric for the S&P 500 has dropped from over 19 in late February to 14.2 last Wednesday, according to data from Refinitiv.

But the metric may be misleading as Wall Street analysts are only beginning to update their estimates. It’s almost certain that valuations will look much less attractive as estimate cuts for 2020 and 2021 continue to ramp up in the coming weeks.

To get a sense of how deep the cuts will be, analysts at Credit Suisse have lowered its earnings per share (NYSEARCA:EPS) expectations for the S&P 500 to $125 for 2020. This revision is roughly a one-quarter reduction from its previous forecast of $165, and represents a 24% decline from the 2019 figure. On the upside, they expect a relatively strong recovery in the following year, with 2021 EPS expected to bounce back by as much as 20%.

This time is different?

It’s never easy to predict the future, and what happened in the past may not always show us of what’s to come. But at the same time, we should be wary of any suggestion that “this time is different”– claims that the old rules of valuation no longer apply and that the current situation bears little or no resemblance to the past.

I’m sure many of you would point out the unprecedented speed of some very substantial fiscal and monetary measures to support the economy in the face of the COVID-19 outbreak as a key reason to be more optimistic this time round. But while policymakers have indeed acted in an uncharacteristically profound and rapid manner, so too is the speed and severity of the epidemic and its impact on the economy.

Underscoring the extremely rapid deterioration of the economy as companies face forced interruptions to their businesses, US jobless claims soared to 3.28 million in the week to March 21. This represents the fastest increase in unemployment claims, and is roughly five times the previous record set in 1982.

What’s more, it is unclear whether lower interest rates and direct cash payments to individuals will do much to boost the economy at a time when public health measures limit the opportunity to spend. Such is the collateral damage from social distancing that there may be some categories of spending that will take years to return to recent high levels. Until fear of coronavirus infection subsides, “virus-sensitive” sectors, including hospitality, leisure, travel and brick-and-mortar retailers, are stuck between a bit of a rock and a hard place.

It seems to me that this looming coronavirus recession can only be arrested by dealing with the source of the problem. In the midst of the public health emergency, the focus must be on epidemic suppression.