Happy New Year: Is It Time to Ditch the Gregorian Calendar for the Hanke-Henry Perpetual Calendar? 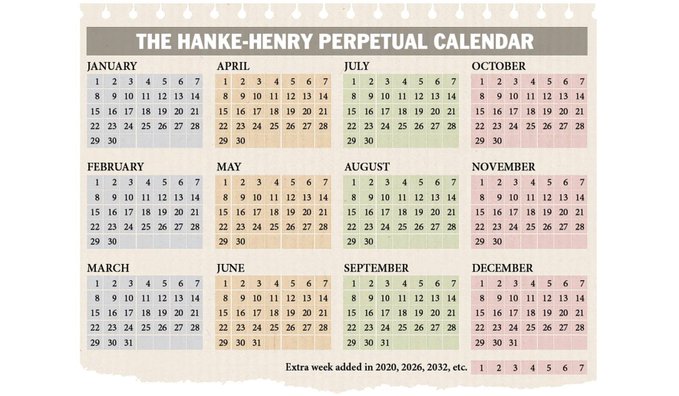 We now waste a great deal of time fumbling around with the flawed Gregorian calendar. For one thing, new calendars have to be printed ever year. What a waste of both time and money.

But this isn’t the only cost dished up by our Gregorian calendar. Indeed, there are a number of problems and inefficiencies associated with it.Under the Gregorian calendar, the scheduling of the days for holidays, sporting events and school schedules — to name but a few — must be redone each year. What a waste of time and money.

The Gregorian calendar also causes confusion when it comes to the age-old idea of “time is money.” For example, to determine how much interest accrues for a wide variety of instruments — bonds, mortgages, swaps, forward rate agreements, etc. — day counts are required. The current calendar contains complexities and anomalies that create day-count problems.

And there are other financial problems generated by the Gregorian calendar. For example, back in 2013, Apple was caught up in a quarterly reporting fiasco. Following its first-quarter 2013 earnings announcement, Apple suffered its worst one-day loss in four years as a result of the company’s failure to meet Wall Street’s expectations. This was largely due to a simple calendar-generated error — most analysts failed to account for the fact that Apple’s Q1 2013 was one week shorter than the same quarter the year before…

The HHPC offers a comprehensive template for revising the contemporary Gregorian calendar. It adheres to the most basic tenet of a fixed calendar: Every date would fall on the same day of the week every year. So, New Year’s Day would always be a Monday. The year would be divided into four three-month quarters. The first two months of each quarter would be made up of 30 days; the third would have 31 days.

So, each quarter contains 91 days resulting in a 364-day year comprised of 52 seven-day weeks. This is a vital feature of the HHPC: By preserving the seven-day Sabbath cycle — and so not inserting “extra days” that break up the weekly cycle — it would avoid the major complaints from ecclesiastical quarters that have doomed all other attempts at calendar reform.

There would be a disparity between the necessary length of our calendar (364 days) and that of the astronomical calendar (365.24 days). The HHPC would account for this by tacking an additional week onto every fifth or sixth year. So, there would be an extra seven days added to the calendar in, for example, 2020, 2026, 2032 and so on. This additional week would serve the same purpose as the extra day we count in a leap year in the present system and keep the calendar in line with the seasons.

There is no reason why calendrical change cannot occur more rapidly today. Indeed, with the stroke of a pen, President Donald J. Trump could sign an executive order. With that, the HHPC would become the “Trump Calendar” — a permanent calendar mandated for use by the U.S. government. Why not? After all, this is what Julius Caesar did on January 1, 45 B.C., when the dictator perpetuo introduced the Julian Calendar.

READ ALSO  Is the Market Grossly Underestimating the Potential Impact of the Coronavirus Epidemic?