Hammond Power Solutions: Trading At A Discount Despite Divestment Of The Major Loss-Making Operation (OTCMKTS:HMDPF)

Home Financial news Hammond Power Solutions: Trading At A Discount Despite Divestment Of The Major Loss-Making Operation (OTCMKTS:HMDPF)
2020-09-212020-09-21By finanz.dk

Note: All figures in CAD unless otherwise stated.

Hammond Power Solutions (OTC:HMDPF) is a leading family-controlled transformer manufacturer, currently trading at a discount to its tangible book value. The company has a history of less successful international expansion efforts, which might scare some investors. Management finally decided to exit the major loss-making Italian business in 2018. With excellent performance in the North American market as well as strong growth in the Mexican joint venture, the company is now positioned to deliver substantial earnings.

Hammond Power Solutions is a Canadian company that has been in the business of manufacturing transformers and related magnetic products for over 90 years. The company manufactures standard and custom dry-type, cast resin, and liquid-filled transformers. According to the company, it is the largest manufacturer of dry-type transformers in North America. The manufacturing plants are located in Canada, the U.S., Mexico, and India.

The U.S. and Mexico made up 63% of sales in 2019, followed by Canada with 33%. Management emphasizes the importance of international expansion outside of North America, but these initiatives haven’t been very successful so far. Since 2008, the company has acquired one business in Canada, two in Italy, and one in India. As can be seen in the following chart, the businesses in Italy and India have been struggling in recent years: 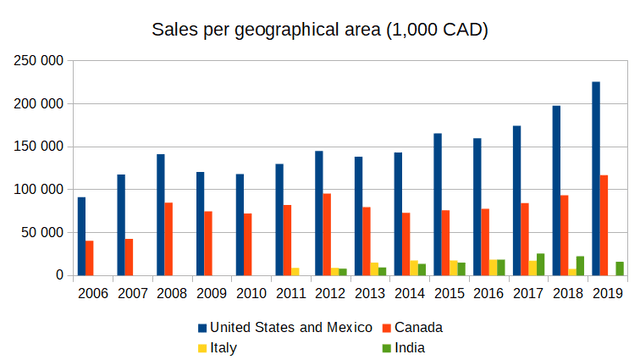 Discontinuation of the loss-making Italian business

The company made its first acquisition outside of North America by acquiring Euroelettro in Italy in 2011. This was the first step in executing the company’s long-term strategy to better serve global customers and lessen the dependence on the North American economies. The acquisition was followed by an additional Italian acquisition of Marnate Trasformatori in 2013.

The Italian business experienced a precipitous drop in business in 2013. Management made several attempts to turn the business around; for example, by consolidating manufacturing from two plants into one in 2013 and at the same time replacing the management team. The company restructured the Italian operations again in 2017, selling off the Vacuum Pressure Impregnated transformer product line, consolidating the manufacturing operations, and reducing excess capacity and workforce costs. After several years of slow recovery and with projections of losing money in 2019 and beyond, management in 2018 decided to exit the Italian business.

Considering the poor performance of the Italian business, and the excellent performance of the North American business, this decision seems well-founded. By cutting the losses generated by the Italian business, the company managed to turn a company-level net loss of $12.9 million in 2018 into a net profit of $11.6 million in 2019. In 2018 alone, the discontinued operations generated a loss of $20.2 million.

The company entered the Indian transformer market by acquiring Pan Electro Technic Private Limited in India in 2012. The acquired business had a long history of building oil-filled transformers for the domestic market as well as for exporting to the Middle East, Africa, and Southeast Asia.

India needs to build out and modernize its infrastructure in areas such as power generation and transit. With the country’s enormous population, this presents a good growth opportunity for the company. The Indian business showed strong growth from 2012 until 2017 but has been struggling in the last two years.

According to the company, the Indian transformer industry dropped over 20% from 2018 to 2019. The company’s business declined by a similar percentage. The solar industry is an important market for the company’s Indian operations. In 2019, the Indian government decided to cut subsidies to solar projects, which negatively impacted the industry in general as well as the company specifically. The company is actively working on diversifying its Indian customer base to reduce its dependence on the solar industry.

In an interview in Electrical India Magazine published in March 2020, vice president of marketing Mr. Prasad commented on the current capacity utilization of the company’s Indian operations, stating that it currently is at 60%. Based on this number, the company is currently not looking to invest more, but rather to increase utilization by changing the range of products manufactured. India is a competitive and fragmented market, but the wide range of products offered by the company sets it apart from most of the competition. If capacity utilization can be improved, profitability will hopefully follow.

The company has during the pandemic been identified as an essential business in all countries it operates in and was able to manufacture even during the lockdowns with the exception of the Indian operations. India was in lockdown from March 24 until May 2. The sales generated in India declined by over 50% in Q2 of 2020 as compared to Q2 of 2019.

Even though short-term headwinds have affected the Indian business, the long-term growth potential remains intact. The country still needs enormous expansion and modernization in the energy and public infrastructure areas. Hopefully, the company’s investment in India will eventually pay off.

Hammond Power Solutions has invested about $20 million in the joint venture. The first couple of years were rough, and Corefficient didn’t produce a profit until 2018. Due to cumulative losses and foreign currency translation differences, the book value of the joint venture investment was about $14.3 million at the end of Q2 2020. Even though Corefficient was off to a slow start, the joint venture almost doubled its revenues from $33 million in 2018 to $58 million in 2019. Hammond Power Solutions’ share of the income was about $270 thousand for 2019. The improvement in 2019 was due to a larger customer base, higher manufacturing throughput, lower material costs, and increased selling prices. It seems like Corefficient is finally on track and hopefully can contribute positively going forward.

Continued growth to be expected

From 2006 to 2019, the company achieved a compound annual growth rate of revenues of 7.4%. According to a report recently published by Allied Market Research, the global dry type transformer market is estimated to achieve a CAGR of 6.1% from 2020 to 2027. According to the report, Asia-Pacific and North America will be the most important markets going forward. Based on these projections, Hammond Power Solutions is present in the most interesting geographic markets.

The company has experienced positive momentum with regards to sales and profit growth in North America since 2017. Unfortunately, the good results in North America were overshadowed mainly by the financial challenges in the Italian business. In 2018 and 2019, the company’s sales growth was in the top quartile in the electrical industry in both the U.S. and Canada. The major engine of growth has been the U.S. distributor channel, which in 2019 saw the tenth consecutive year of increased sales and the third year in a row of double-digit growth.

Based on the historical growth rate achieved by the company, and the expected continued growth of the markets in which the company operates, it seems reasonable to expect the company to be able to continue growing at around 7% per year.

The company is trading cheaply relative to its historical valuation. In the following chart, the valuation in relation to tangible book value and revenues is clearly lower than usual:

The total compensation paid to William G. Hammond in 2019 amounted to $1.1 million. Chairman and CEO compensation payment of $1.1 million for a $70 million market cap company seems to be on the high end of the spectrum. Assuming that the Class A and Class B shares would have the same value if both classes were publicly traded, Mr. Hammond’s shareholding would be worth $23 million. Total dividends paid directly and indirectly to Mr. Hammond during 2019 were about $1.1 million. Even though executive compensation might be a bit high, considering the value of Mr. Hammond’s shareholding, his economic interest should be aligned with the interests of the minority shareholders. In his letter to shareholders in the annual report for 2014, Mr. Hammond specifically commented on this:

“As one of the largest shareholders of HPS, I too am substantially impacted, professionally and personally by what transpires within our Company. […] We all want HPS to be successful – to see a rising share price, and that is what we are working diligently to do.”

According to the 2019 Management’s Discussion and Analysis report, the company concentrates on sales growth, gross margin generation as well as operational improvement. The Annual Performance Incentive Plan reward targets related to earnings per share and Return on Net Assets. This incentivizes management to focus on net income, which is, generally speaking, easier to manipulate than gross margins of cash flow.

A family-controlled company has pros and cons. An activist investor can’t gain much influence on how the company is run. On the other hand, the Hammond family will most likely do its best to keep the company in business in order for it to eventually be handed over to the next generation. The company is currently being run by the third generation. A family-controlled company can also afford to take a long-term view of the business, which is more difficult in a company without a long-term majority shareholder.

The company is exposed to the energy sector which has been struggling lately due to reduced demand following the global pandemic. Reduced demand for the company’s products from offshore drilling companies and the petrochemical industry could impact revenues and earnings in the near term.

Despite the company’s questionable record with regards to international expansion efforts, management in the annual report for 2019 continues to emphasize the opportunities for growth through geographical expansion and through acquisition. If the company makes an acquisition, shareholders are advised to carefully monitor the development of the acquired business.

Sales from continuing operations declined by 18% in Q2 2020 as compared to the same quarter of 2019 due to COVID-19. Bookings decreased by 18.5% as well. A second wave of lockdowns could significantly impact the customers of the company, with delays of projects and reduced operations as a result.

The discontinuation of the Italian business and strong growth in the Mexican joint venture strengthens the earnings power of the company. The poorly performing parts of the company have masked the true earnings potential of the company in recent years, and without this drag on the results shareholders should stand to profit.

If the company can continue to grow at par with the market or even gain market share, growth of at least 7% per year seems likely. If the growth can continue without huge CAPEX, the company should be able to deliver substantial free cash flow going forward.

The company is trading at a discount to tangible book value, as well as cheaply on EV/S, EV/EBIT, and EV/FCF metrics. When buying a stock at such a depressed valuation, the odds of good investment returns simply due to mean reversion are good.

Hammond Power Solutions is a family-controlled company with a long history as a public company. Even though COVID-19 and a struggling energy sector cloud the near-term outlook, the low valuation is attractive enough to warrant an investment.

Disclosure: I am/we are long HMDPF. I wrote this article myself, and it expresses my own opinions. I am not receiving compensation for it (other than from Seeking Alpha). I have no business relationship with any company whose stock is mentioned in this article.