In 1974, Gunnar Myrdal, a socialist, received the Nobel Memorial Prize in Economic Sciences in the oddest way. He had to share it with the free-market economist Friedrich Hayek.

Furious that he had to share the prize with Hayek and that later Milton Friedman was awarded the prize, Myrdal, in a 1996 letter to the Swedish newspaper Dagens Nyheter, argued that the prize should be abolished.

He stated in the letter that in 1974 he should have declined the award. He said that at the time he had not thought the problem through and was “merely disgusted.” Also, the message announcing the award reached him “very early one morning in New York, when I was totally off my guard.”

Apparently, based on new allegations, he is quite familiar with the concept of getting “caught off guard.” 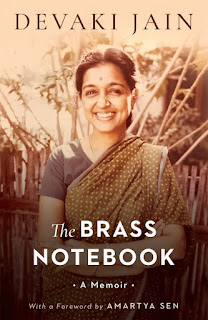 A new memoir, The Brass Notebook, by the  Indian economist Devaki Jain is out and it appears that, without identifying him by name, in the book she accuses Myrdal of a sexual assault.

I had one unwelcome experience in Oxford in 1958 when I worked as a research assistant for an eminent Swedish economist. He was in Oxford, courtesy Balliol College, to work on his magnum opus, a three-volume work on development. He had senior colleagues to assist him and was looking for a junior research assistant from Asia.

I was twenty-five. I had grown up in south India, and lived in Bangalore. I had graduated from a women’s college in Bangalore, with special papers in mathematics and economics, and was awarded three gold medals by the University of Mysore for topping the results in maths and in general totals. Later, in 1955, I had studied at Ruskin College in Oxford and got a diploma in the social Sciences.

Another qualification which seemed relevant to his work was that earlier, in 1958, after attending the Harvard Summer Seminar with a grant from the Asia Foundation, I had travelled to almost every country in Asia, starting from Hawaii, to Japan, Vietnam, Cambodia, Hong Kong, Malaysia and Myanmar (erstwhile Burma).

The professor had mentioned to some of his friends in the subcontinent his interest in recruiting a young person from Asia to add to his assistance for writing this major book on the region and its economic prospects. One of these contacts knew me and suggested that I apply. I promptly applied, and was invited for an interview at the residence of the Swedish ambassador, Alva Myrdal’s residence. I was thrilled when I was selected.

I travelled to Oxford to join the team. My job was to research, prepare notes and write a rough draft for the chapters on the political situation of the countries, a section called ‘Political Background’, which was to serve as a background for the other chapters focused on the economy. I found accommodation, a room in a boarding house set up by the same Russian orthodox group, whom I had known when I was at Ruskin College.

The professor would often host dinners for his team as well as some of his colleagues from the university, in the best restaurants in Oxford. One such evening, after a big dinner at a restaurant at Windsor Castle, an hour or more away from the city of Oxford, the professor offered to drop me at my lodgings. I accepted his offer without a qualm, since I had no indication that he was a predator. I sat in the seat next to him while he drove.

We were speeding along the main road, when he laughed and dug the fingers of his left hand into my crotch. I used to wear a sari in those days so it was not difficult for him to plunge his fingers between my thighs in one quick move. Stunned, I shouted, ‘What are you doing? Take your fingers out.’ His response was to laugh and say sardonically, ‘You could not be a virgin, what are you trying to tell me?’

He kept pushing his fingers in, dragging me towards him with that left hand, and I was frightened to death. But I found the courage to put my hand on the door handle and say: ‘I am going to open the door and jump out. Of course I will die but you will be prosecuted and go to jail.’ As he heard the click of the door, he removed his hand. He abused me, alleging that I was pretending to be a virgin, that I must surely have had sex by now, and so what was this fuss all about. Then he drove me back to my lodgings and went his way home.

The trauma deepened the next day when I went to work. He was in his room, surrounded by our colleagues. Seeing me walk in, he started to laugh and said: ‘This woman is an uncut diamond. She is not educated enough to work with me.’ He then served notice on me, saying I was inadequate for the job and my salary would stop from that day.

There I was, in a foreign country, without the support of family, subject to the vengeful wrath of a sexual predator. I had no confidante to whom I could go for counsel, and knew of no institutional mechanism to seek redressal. No one spoke openly of these things, though it was obvious enough that most people knew what went on and sustained the toxic climate by their omissions even more than by active collusion. It was the late 1950s and this was just how things were.

It was a crushing blow, and it was hard not to let myself think that he was right: maybe, despite being top of my year in mathematics in Mysore, despite my diploma from Ruskin College, maybe I was, as my employer maliciously insinuated, not all that intelligent. I was a young woman and my intellectual self-confidence was, at the best of times, fragile; survivors of assault, I have since learnt, are often wracked by feelings of guilt and inadequacy, prone to self-blame for advances they did nothing to provoke. This intellectual humiliation was bad enough, but it got worse: I was told that my employer was withdrawing from his obligation to pay my return fare to India.

During the few months that I had worked with the professor, I had struck up a friendship with some others of his team. Apart from Ester and Mogens Boserup, the Danish academics, especially skilled in statistics, there was Paul Streeton, a brilliant scholar who was a Fellow of Balliol College.

Isolated and without resources, I went to Paul, who advised me to reach out to St Anne’s, at that time known as the most progressive college, interested in wider issues, and ask to be admitted to their philosophy, politics and economics (PPE) course. I approached St Anne’s to see if they would admit me for an Oxford degree. They did.

Keerthik Sasidharan notes that the only 3 volume development economics classic from that era is probably the Myrdal volumes.

A shocking note by Devaki Jain of a sexual assault in 1958 by ““an eminent Swedish economist” who went onto write a three-volume project” when she was graduate student.

The only 3 volume development economics classic from that era, I can think of, is this. https://t.co/X7X1JgDbg8 pic.twitter.com/FD3AubjoSR