Those markets are already getting hit.

Alphabet, the parent company of Google, which has about 200,000 employees and contract workers, keeps pushing out the date when its staff can return to the office. CEO Sundar Pichai has now decided, after a debate with his leadership team, that work-from-home will be in effect at least until July 2021, a source told the Wall Street Journal.

The goal post gets getting moved. The previous back-to-the-office date had been set for January. In May, Pichai said in a message that post-pandemic there may be “more flexibility and choice for employees as they consider how to work in the future.” But he was still expecting that “most Googlers will be largely working from home for the rest of this year.” This goal post has now been moved to at least July 2021.

Unlike other tech companies, Google has never really got on the permanent work-from-home bandwagon and has so far not announced it as a permanent option.

After the WSJ reported the news this morning, Pichai sent a note to employees:

“To give employees the ability to plan ahead, we’ll be extending our global voluntary work from home option through June 30, 2021, for roles that don’t need to be in the office,” Pichai wrote.

“I hope this will offer the flexibility you need to balance work with taking care of yourselves and your loved ones over the next 12 months.”

In the US, Alphabet has a large office presence in the San Francisco Bay area, not only at its headquarters in Mountain View, but also in numerous office buildings spread around the Bay Area.

In addition, Google is planning to build a huge project in San Jose’s Diridon Station Area, of 7.2 million square feet of office space and 5,900 residential units. The plan is still being hammered out with city of San Jose.

And it has built up a massive and expensive presence in Manhattan, where it operates out of several buildings, including the eight-story Chelsea Market, spanning an entire city block, that it acquired in 2018 for $2.4 billion, the second largest deal ever to close in Manhattan.

In December 2018, Google announced that it would invest over $1 billion in capital improvements “to establish a new campus, Google Hudson Square” in Manhattan. The campus spreads over three leased buildings with over 1.7 million square feet of space. At the time, Google had over 7,000 employees in Manhattan. Construction officially kicked off in October 2019.

In addition to its huge and costly and – formerly – ballooning presence in the Bay Area and in Manhattan, Google has offices around the country: 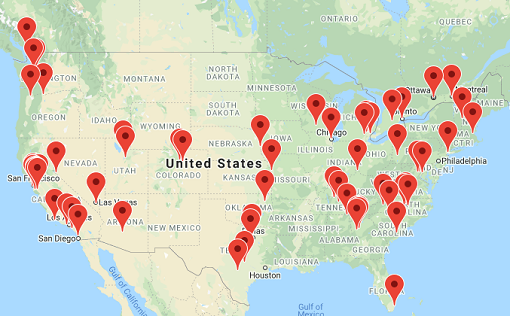 Other companies with large numbers of office workers who are now working remotely are likely to follow Google’s lead to keep “most” of their staff working from home for another year at least. It will give companies and employees more time to fine-tune the whole process of working remotely in order to improve its efficiency, which will make it more entrenched.

This extension of working remotely has big impacts on housing – both owned homes and rental apartments – as well as the office sector of commercial real estate.

In Silicon Valley and San Francisco, where working remotely has become a very big thing, it is already showing up in the housing and office sectors.

Condo prices in the San Francisco Bay Area in June dropped by 6.5% year-over-year, according to the California Association of Realtors, with the largest price drops in Silicon Valley (Santa Clara County -10.9%; San Mateo County -7.8%) and San Francisco (-6.6%). And the median rent of one-bedroom apartments in San Jose dropped by 8.0% in June compared to a year ago, and in San Francisco by 11.8%.

There is now a large amount of office space coming on the market, particularly sublease space, where companies decided in the past that they needed to lock in scarce office space even if they didn’t need it at the moment. This “warehousing” of office space was designed to provide space in the future when these companies would expand into it. Much of this space has remained vacant and is now coming back on the market.

In San Francisco, where the office market had been softening before the pandemic, office availability surged 2.4 percentage points in the second quarter to 13.5%, the highest since 2012, according to Savills. Sublease space surged by 40% and now accounts for about half of total availability.

READ ALSO  SE: Inside the Australia-China Trade Tension Over Covid-19

“Most companies are downsizing, as layoffs and furloughs continue to creep into the labor force, in addition to WFH measures being lengthened,” the report by Savills said.

But these were the dynamics in the second quarter. Google’s decision to extend its working-from-home policy until at least July 2021 – with other companies likely to follow in its footsteps – are now piling on top of it.

The initial moves in the condo, apartment, and office markets may have been caused by the first knee-jerk reactions to working-from-home. What is now setting in is a deeper shift as companies realize that this won’t blow over in a few months and that there will be long-term changes in where work will be done.

Previous PostUS sunbelt coronavirus surge shows early signs of easingNext PostSE: How Tech Sector Is Holding Up During the Crisis