Gold: The Highway To Inflation Is Open

We are looking at a pretty dark winter in terms of any kind of economic activity. Curfews are starting in California. New York schools are closed. It feels again like the first time in March when we were first hit by the pandemic. The markets reacted tremendously, dropping more than 1,000 points. The fundamentals appear to mirror the sentiment that we had in March, with the difference that this is the second wave. As we move into the winter, this can only get more complicated.

How do you take advantage of the situation? One of the reasons we focus on gold is that gold is going to be a major beneficiary of the situation. Gold collapsed in March related to the tremendous sell-off in equities, which also affected precious metals. It was liquidated to raise cash to retain positions. Usually when there is a large sell-off in equities, investors often liquidate precious metals to meet margin requirements for stocks.

In March, we saw the first impact of the pandemic economically. Gold fell and then rose more than $600 an ounce. At the top, the market got too rich, too fast. It was a historic rally to new highs. The paradigm then changed with gold becoming a currency. In 1971, the paradigm shifted when the dollar was taken off the gold standard. In 2020, it shifted again. The US dollar is a paper fiat currency with no real backing to protect its intrinsic and purchasing power. Gold has value and is now a currency of sorts. Governments are printing endless amounts of debt in terms of US dollars, thereby reducing the value of each dollar. The US dollar has fallen about 98% compared to gold since 1971, and is continuing to fall.

This is a generational crisis, but it is also a generational opportunity. The economic system is going to have to change. In January, we have the Davos economic summit with all of the elite. They were responsible for the 1971 decision to eliminate the gold standard. The dollar then became the petro-dollar, more tied to the price of oil than to gold. Right now, we are facing mountains of debt. We have doubled our debt since 2008. Banks have $2 quadrillion in risk in derivatives. They have not and did not reduce their risk of leveraging, but have continued to increase their leveraging since the 1970s.

The volatility in the market is so great now that no trader can handle it. You need to use artificial intelligence and algorithms to help take your emotions out of trading. With help, you can embrace this historic opportunity to make tremendous profits.

It is difficult to sort out real news from propaganda. One way to cut through the noise is to listen to what the market is telling us. The stock market continues to rise, to the benefit of the wealthy, such as those who can borrow money at almost zero interest rates and then buy stocks and make a profit with almost no risk. Big corporations can buy their own stock and literally make free money. The government is not only supplying free money to play with, but it is also guaranteeing the other side of the market by saying they will be a buyer of last resort. No matter what happens, the government will buy you out. The US can do that because the government can print as much money as they want to print. They are leveraging the asset base of the US, which means it is coming out of all of our pockets. Someone will have to repay all of the debt, and it will be the taxpayers and all Americans for generations to come. What they don’t say is that the more stimulus they provide, the greater the risk of inflation and, even of hyperinflation. Check out Shadowstats.com for the real inflation rate, which is above 2 percent. You are beginning to see in gold, the realization that all of the stimulus money is going to come back to haunt the dollar in terms of its purchasing power and inflation. It will no longer be the world’s only reserve currency.

Globally, debt only increases and we are moving into an even more debt-laden economic system. Interest rates have to be kept near or at zero for a long time or the entire system will collapse under the weight of the debt payments. Even a slight increase in interest rates will lead to a tsunami of debt defaults. All of this is leading into an economic climate that is going to be highly inflationary. Gold will benefit from such a climate. So, we strongly recommend that at least one-third of your assets should be in gold and silver.

In the short term, the Fed and the Treasury appear to be preparing for another bazooka of stimulus to hit the market. The gold market appears to be anticipating more stimulus hitting the market. 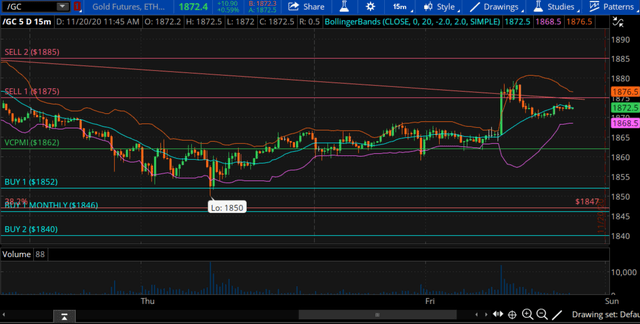 We are still long gold in the futures. We are also carrying a lot of derivatives long in gold.

If we close above $1,885, the weekly numbers will come into play. The daily, monthly and weekly are all in close harmony, around $1,852, $1,846 and $1,835. They offer an incredible opportunity to get on the long side, if activated. Only the daily Buy level has been activated around $1,850. Now it has activated a daily bullish price trend momentum. It completed the target of $1,875 and activated the $1,885 daily target. This is all happening during a bearish weekly price momentum. It will convert the daily levels into support for the next weekly target, which is $1,901. Once resistance is broken, that resistance becomes support for the next fractal in price. As gold rises into the red zone, you want to unload some longs you bought at around $1,850.

READ ALSO  What Trump Will Leave In Biden's Inbox

Silver met the target as well from $23.71 to the Sell 1 level of $24.46. When the market trades above the average price, the VC PMI identifies the trend momentum. The VC PMI is a contrarian indicator to the momentum of the market. Silver has completed a pattern and has given a trend alert from the Sell 1 level of $24.46. If silver closes below $24.46, it will activate a short trigger. We use 15-minute bars with the VC PMI. You don’t want to buy at the Sell 1 or 2 levels, which only have a 5% to 10% chance of the market going up from those levels. There is a 90% (Sell 1) and 95% (Sell 2) chance that the market will revert back down to the mean from those levels. If you are long, you can use the sell levels to take profits. Then wait again for the market to tell you what the momentum is going to be.

To learn more about how the VC PMI works and receive weekly reports on the E-mini, gold and silver, check out our Marketplace service, Mean Reversion Trading.

Disclosure: I am/we are long NUGT. I wrote this article myself, and it expresses my own opinions. I am not receiving compensation for it (other than from Seeking Alpha). I have no business relationship with any company whose stock is mentioned in this article.