Gold Should Get A Stimulus Boost

It has been a rough couple of months for gold and silver, with metals investors wondering when (and if) the recent malaise will ever end. The good news is that for the first time in months, the fundamental backdrop for both assets is improving, boosting the odds for a meaningful autumn rally in the precious metal arena. Here we’ll discuss the prospects for major improvement in gold’s currency component (which I view as a key market driver going forward) as another breakdown in the dollar looms once the next round of U.S. economic stimulus begins.

Metal investors have had a stellar 2020 to date, as the gold price gained nearly $600/oz. (up 40%) in just the first seven months of the year. Since hitting a peak slightly under the $2,100 level in July, however, gold has pulled back and has spent the last couple of months treading water around the $1,900 level. This period of choppy trading action has left many participants with an uneasy feeling that perhaps gold’s bull market is over. 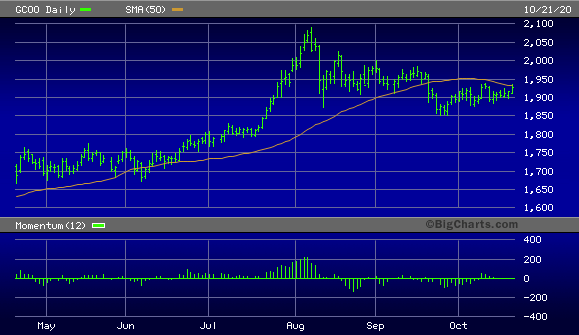 The fact that the gold price broke below its 50-day moving average last month – and has remained under this widely-watched trend line ever since – hasn’t helped allay these fears. If nothing else, the break below gold’s 50-day MA confirmed that the bulls temporarily lost control of the metal’s intermediate-term trend. But as I’ll explain, these fears are unfounded and will likely soon be laid to rest by the market’s action in the coming weeks.

Gold’s weakness really began in early August when U.S. Treasury yields began climbing from a multi-year low. For yield-seeking investors, the rising TNX meant that safe-haven demand for non-yielding bullion has diminished, as participants have been attracted to the rising Treasury rates. The rally in the 10-Year Treasury Note Yield Index (TNX) in early August was the first shot across the bow for gold, and from that time forward, the metal’s price has been under pressure. 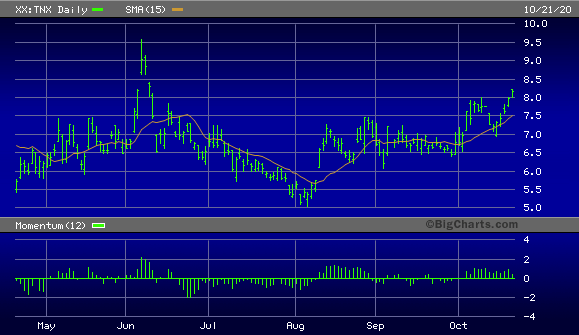 But as much as higher yields have suppressed gold demand, the shiny metal’s most dominant driver this year has been, and still is, a weakening greenback. Since gold is priced in dollars, a weakening U.S. dollar index (DXY) is typically uplifting for gold prices. This year’s enormous central bank and fiscal stimulus efforts, coupled with production shutdowns (or slowdowns) of several major industries, paved the way for the dollar’s multi-month decline which saw DXY hit a 2-year low this summer. This year’s prior stimulus efforts created some inflationary pressures and boosted the gold price.

Some market commentators, however, insist that the Fed’s asset purchases don’t actually constitute inflation, or “money printing.” But this claim was disproven by Federal Reserve Chairman Powell himself earlier this year.

In May, Powell was asked by CBS News’ 60 Minutes to explain where the central bank obtained the funds with which to purchase Treasury bonds. He acknowledged that the Fed does have the ability to “print” money digitally through the process of buying bonds and other government-backed securities. “And that actually increases the money supply,” said Powell, who added, “We also print actual currency, and we distribute that through the Federal Reserve banks.”

So, to those who maintain that “QE forever” isn’t inflationary and doesn’t impact the dollar’s value, think again!

Further proof that this year’s monetary stimulus efforts have created at least some inflation can be seen in the inflation-sensitive agricultural commodities like corn, soybeans and wheat – all of which have experienced dramatic price increases in the last few months. And while there isn’t normally a direct correlation between ag commodity prices and the gold price, historically, whenever ag prices show unusual and persistent strength while gold remains unresponsive, it’s usually just a matter of time before the yellow metal price plays “catch up” to the other commodities.

READ ALSO  Livent Is A Solid Play In Lithium (NYSE:LTHM) 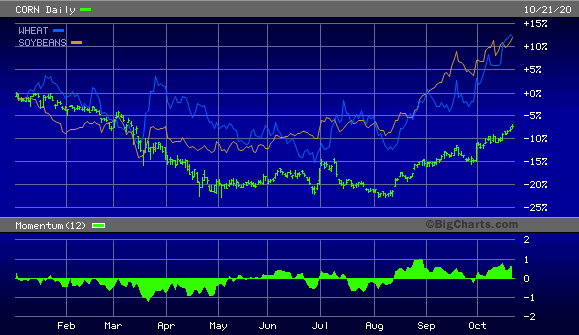 To reemphasize my main point, dollar weakness is the main driver for not only the strength we’re seeing in other areas of the broad commodity market, but for gold as well. Indeed, the dollar index appears to be on the verge of another breakdown, as can be seen in the following graph. 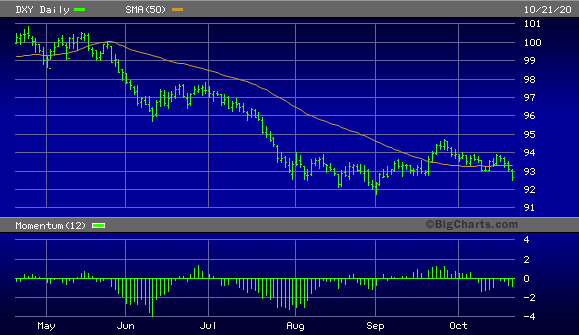 When might we see the dollar’s next plunge? My best guess is that the only thing keeping the dollar index from breaking down is the delay of the U.S. Congress in passing another stimulus package. Goldman Sachs (NYSE:GS) thinks the next round of stimulus will have to wait until after the November 3 presidential election (a prediction I don’t dispute). But sooner or later another round of stimulus is coming, and when it does, the dollar index will almost certainly respond with another show of sustained weakness as more money is once again created to assist a shutdown-weakened economy.

And if the dollar takes another dive this fall as I anticipate, I further expect to see gold revisit its previous high at around $2,100 and possibly exceed it in short order. Silver, meanwhile, should continue to follow gold’s lead and should have little trouble overcoming its nearest high of $30.

For now, I recommend waiting until both gold and silver decisively close above the 50-day moving average on a weekly basis before adding to existing intermediate-term long positions in both metals. While we may have to wait until after the U.S. elections before both metals break out of their recent trading ranges, the weight of evidence as discussed here favors a weaker U.S. dollar and stronger precious metals prices in the months ahead.

Previous PostBeijing Readying “Retaliation List” After US Names 6 More Chinese Outlets As Foreign MissionsNext PostControlling the pandemic – Should covid be left to spread among the young and healthy? | Science & technology